According to the ‘GCC Low Cost Carriers’ report published by Markaz, in the recent past, the number of passengers traveling by Low Cost Carriers (LCCs) has grown faster than that of legacy carriers (also known as full-service carriers). 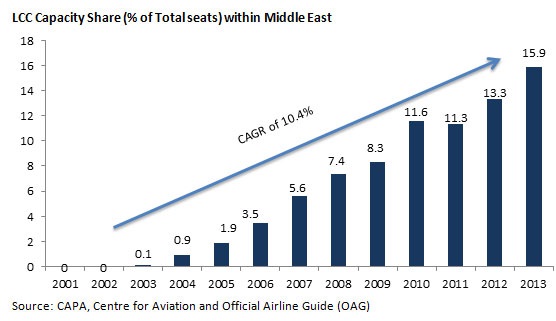 The report states that LCCs cater to the core need of passengers, which is transporting them from one point to another. LCC carriers have structured their business in such a way so as to reduce their operating costs and the benefits reaped are passed on to customers in the form of lower priced tickets. To reduce costs, the airlines have filled their planes with more seats, standardized their planes or majorly use only one type of aircraft, flew more often, and have strived to fill their seats to capacity. For instance, the entire fleet of Air Arabia is comprised of Airbus A320 type aircraft, making maintenance more efficient and thus enabling cost savings.

Ancillary services such as free baggage and in-flight meals are usually dropped and charges were introduced for the same. Direct ticket sales were encouraged, to cut agent fees and yield management systems, which could sense demand and calibrate ticket prices, were introduced.

In order to understand the implications of the LCC business model and how much of a cost difference could such lean operations bring about in air fares, we analysed the air fares for key routes in GCC markets. 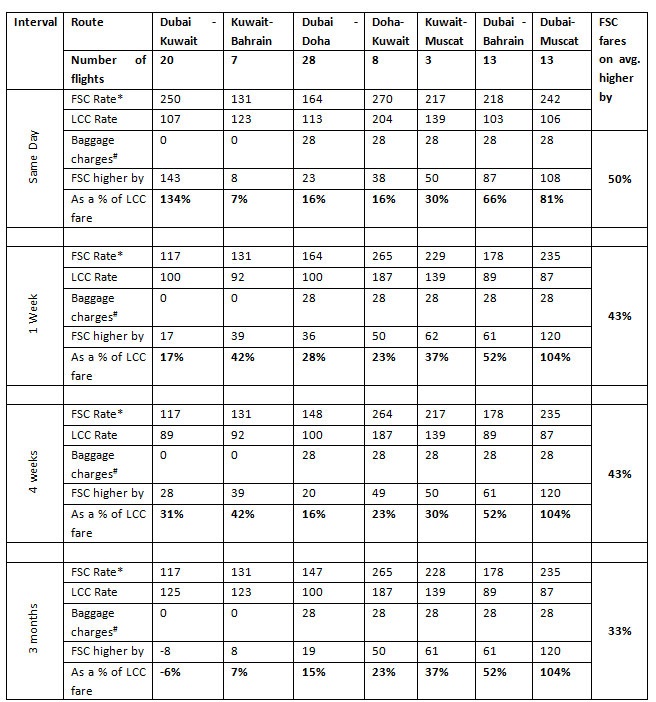 In the short-term (travelling within a month of booking), Full Service Carriers (FSC) fares were higher by 50% to 43% over LCC, even after accounting for extra baggage fees in LCC fares. Since the flight duration is less than 2 hours, flight amenities such as in-flight catering may not play a big role in the customer’s choice of flight.
While in the medium-term, though the rate differential on an average moderated, FSC fares were still higher by 33% over LCC.
Differential in fares were also found to be route dependent, with the difference being narrower in busier routes such as Dubai-Doha where 28+ flights operate on a daily basis. While passive routes such as Dubai-Muscat, where 13+ flights operate on a daily basis the price gulf were distinctly wide.

Operational efficiency and stricter cost control measures have often been cited as the primary reason for the success of the LCC model. LCC operators usually have above average aircraft utilization rates which enable them to spread across the aircraft costs (higher and fixed in nature). Quicker flight turnaround and increased savings are made possible by having an in-house Maintenance Repair and Operations (MRO) team.

Comparison with number of employees and fleet size as of 2013