According to our recently released Monthly Market Review for the month of October, GCC equity markets remained flat thanks to Qatar’s positive performance, while global equity and bond markets shed nearly USD 5 trillion in wealth during the period. Qatar was the best performing GCC market during the month, gaining 5.0% despite the ongoing selloff in emerging market equities. Qatar’s main equity index was also the only main GCC equity index to witness positive returns for October.

Kuwait extended its losing streak for the third month running, declining by 1.7% in October. However, the YTD returns remain positive at 7.0% buoyed by the FTSE emerging market inclusion. All of Kuwait’s blue chip companies were negative with Zain Telecom sliding 6.3% during the month. Despite losing 6.4% during October, Boubyan Bank was the best performing blue chip stock in Kuwait for the year, with a YTD return of 26.7%. Liquidity in Kuwait markets fell during the month, with average daily value traded reducing by nearly 25% compared to September after adjusting for the FTSE EM inclusion.

The S&P GCC index was marginally up 0.1% for the month, retaining the overall gains for the year at 9.8%. Qatar’s resilience in overcoming the embargo through progressive economic reforms aided the market’s rebound in 2018, helping it gain 20.9% in YTD 2018 after a lacklustre end to 2017.  The beat down in Dubai stocks continued as Dubai’s DFM General Index extended its losing streak, falling by 1.8% during October and 17.4% in YTD 2018. Abu Dhabi, Bahrain and Oman indices lost 0.7%, 1.8% and 2.7% respectively during the month.

Intermittent volatility was observed in the Saudi markets during October, as geopolitical concerns and heavy foreign selling weighed in on the country’s index. On October 14, the main index plunged by nearly 7% during intraday before recovering about 3.5% at close. Ongoing geopolitical events have weighed in on investor sentiment as Saudi stocks witnessed heavy selling from foreign investors. However, Saudi Arabia’s main index lost only 1.2% during the month, much lesser than its emerging market peers after receiving support from domestic institutions. As the U.S. sanctions on Iran’s crude exports are expected to kick in by November 2018, all eyes remain on Saudi Arabia as the oil markets gear up for a change in dynamics.

Qatar National Bank and Industries Qatar were the top performers among GCC blue chip companies, rising by 10.2% and 9.9% during the month respectively. The strong performance of Industries Qatar was on the back of a solid earnings growth of 62% during Q3 2018. Growth in sales volume and increased prices of petrochemical products compared to the previous year were the key drivers of profit for the company.

Global Markets: Is the party finally coming to an end?
Global financial markets have been hit hard in the recent weeks as investors have been in a sell-off mode, following concerns over a slowdown in global growth and rising fed rates. The month of October in specific has been painful for investors, as nearly USD 5 trillion in value has been erased from the equity and bond markets. Worries regarding a trade war, decline in emerging market currencies, rising borrowing costs and bond yields have affected investor confidence severely during the year.

The U.S. Fed is strong on its path of raising interest rates, which has led to the continued strengthening of the U.S. dollar (+5.4% YTD). Although the near-term economic outlook remains strong thanks to a buoyant labor market and federal spending increases, growth is expected to dampen somewhat in 2019 and slow more markedly in 2020 as multiple headwinds loom.

Emerging Markets continue to dwindle as the indices have seen a sharp fall throughout the month of October with the MSCI EM Index losing 8.8% during October. It is expected that volatility will remain high as markets digest interest rate changes, trade tensions and the slowing Chinese economy. Investor sentiment in Chinese markets remain jittery due to trade war concerns. The world’s leading emerging market has faced severe wealth erosion as the country’s equity index fell by 7.8% during the month, extending its YTD losses to 21.3%. Brewing uncertainties of the trade war and rising US interest rates cast shadows over China and other developing markets as the world witnesses the longest selloff in emerging market assets since the Global Financial Crisis. Economic activity in Latin America continues to be held back by political and financial instability in key economies such as Argentina, Brazil and Venezuela, while the Middle East and North Africa, and Sub-Saharan Africa regions have benefited from higher prices for their key commodity exports.

Crude has been under consistent pressure during the month despite U.S. sanctions on Iranian exports due to come into force in a few weeks. Concerns over falling global demand and oversupply has seen Oil prices tumble by 8.8% in October, its largest monthly decline since July 2016. 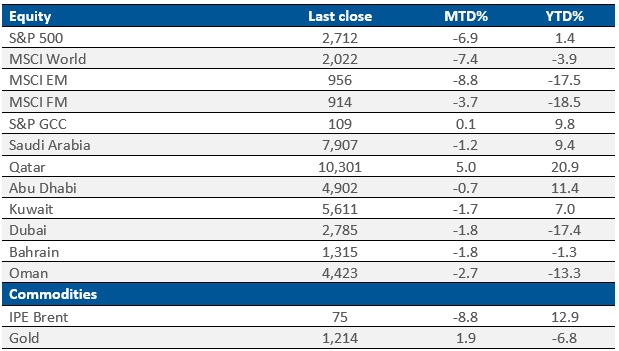