Revenue from oil forms significant portion of overall revenue for GCC countries, with 20-year(2000-2019) average at 74%. This dependence on oil as revenue source has long been a pain point for GCC’s fiscal position, surfacing during periods of low oil prices and receding during periods of high oil price.In the backdrop of fall in oil prices due to COVID-19, building a sustainable fiscal policy in GCC has resumed higher importance.

Ascend to Prosperity
Referred to as black gold, oil has propelled GCC economies to prosperity. Oil prices have been on the rise from 2000 to 2008supported by rise in globalization and high growth in countries like India and China.After a blip in prices due to global financial crisis in the 2009, economic recovery on the demand side and geopolitical tensions stressing thesupply side sustained high oil prices until 2014.This period has been quite favourable for the GCC countries in terms of building up assets and flourishing as welfare states. 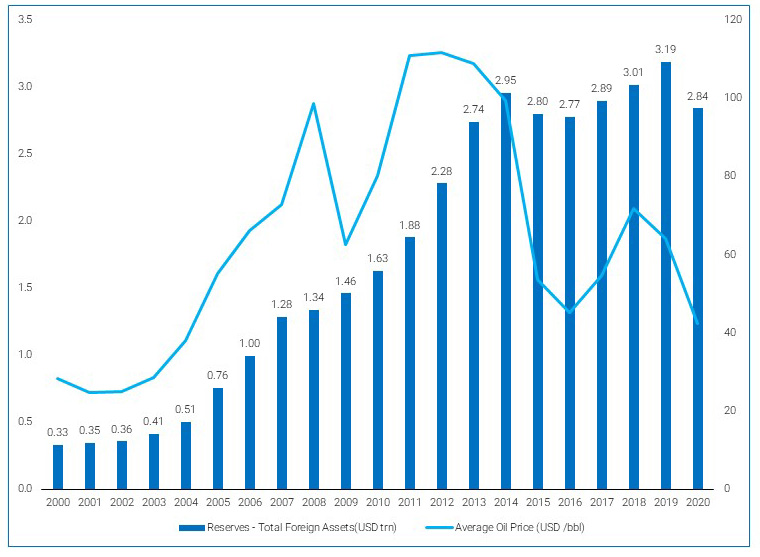 Fiscal Vulnerability
While the reserves of GCC countries continued to increase in line with revenues, so did the government’s expenditure bills. Over the period 2000-2013, while total revenue for all of GCC increased at CAGR of 12.9%, total expenditure increased at a CAGR of 13.1%. The expenditure as percentage of GDP in GCC is higher than the EMs and other oil importers(IMF -2017). GCC’s fiscal policy was also skewed towards current expenditure, particularly wages and subsidies. This pattern of expenditure made the GCC economies vulnerable in two ways – first, the expenses were based on oil prices, an unstable revenue source; second, less focus on capital expenditure implied minimal economic diversification and continued reliance on oil. 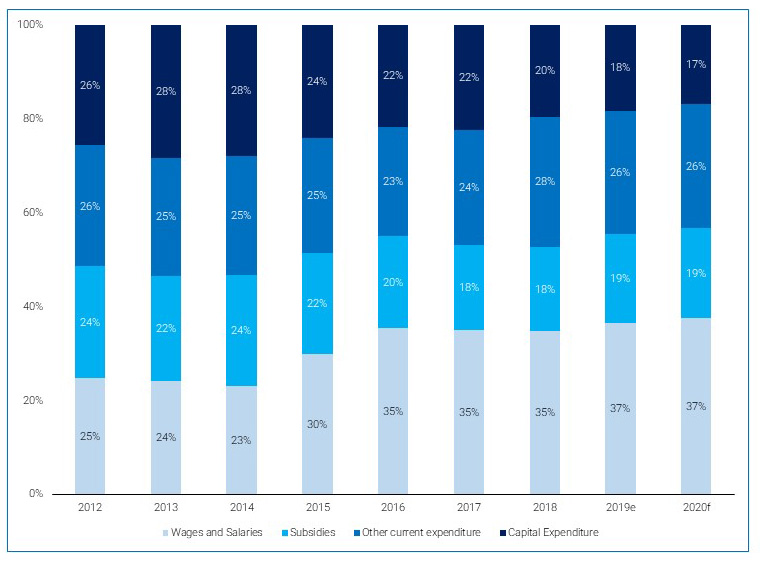 On the back of increase in shale oil supply and slowdown in economies like China, oil prices started to fall in 2014 and reached their trough in 2016. With fall in revenues and elevated expenditure levels, all GCC countries, except Kuwait, posted fiscal deficit from 2015-2017. Kuwait had managed to return to surplus in 2016, from fiscal deficit in 2015, by reducing current expenditure.There was considerable increase in government debt for the GCC countries by 2016. While some countries across the world do run on deficit budgets, vulnerability of GCCs’ fiscal position arises from its lack of stable revenue base and singular dependence on oil revenues.

Periods of rising oil prices from 2000-13, did provide an opportunity to diversify into a non-oil economy and increase job opportunities. Though efforts had been made to improve non-oil economy such asnational development plans enabling diversification through infrastructure development and improving ease of doing business to promote private sector growth, much more had been required to have fully capitalised on the period of high revenue.
After the 2016 crash, though prices recovered, they did not touch pre-crash levels. But government expenditure continued to remain high. For example, in Kuwait,it is difficult to rein inexpenses on wages and subsidies that form a major portion of total expenditure. This has left the economies much weaker to face COVID-19 and resultant fall in prices, than they were before the 2014-16 crash.

Challenges due to COVID-19
COVID-19 hashighlighted the vulnerabilities in the fiscal position of GCC countries.

The way forward
The future of oil has become more uncertain in the face of COVID-19. Changes brought about by COVID-19 in terms of reduced globalisation as supply chains are being localised,less travelling due work from home and video-conferencing and shift towards cleaner energy sources might impact demand for oil.There are also forecasts of high, though unsustainable, oil prices. This is based on the cyclical nature of the industry, wherein oil production cuts during period of low prices cause deficit, thereby pushing up prices of the commodity.
However, there is wide consensus that global oil demand is set to decline in the long term, re-iterating need forfiscal reforms.Expenditure cuts by Kuwait, Oman etc. and tripling of value added tax by Saudi Arabia are some of the recent measures undertaken by the countries to shore up finances.Other measures that could be implemented are,
1. Reducing current Expenditure
a. Targeted subsidy programs to the truly needy, while being effective would also reduce burden on state finances. The subsidies and transfers could also be anchored to oil revenue until a more stable revenue system like taxation is implemented.
b. Reforms to reduce burden of the wages bills on budget by reducing premium on public sector wages, restructuring of public sector, encouraging and facilitating private sector employment etc.
2. Sustained implementation of consolidation measures is important.
While the countries had implemented expenditure cuts during oil price crash of 2014-16, the reduction was sustained only by Qatar. This is observed particularly in Saudi Arabia and Bahrain, where the current expenditure in 2019 is estimated to be up by 23.5% and 6.6% from their 2014 levels.
3. Diversifying into non-oil economy driven by private sector
a. Capital expenditure has seen significant decline since 2014, except in Kuwait and Qatar. This reduction in capital spending has more pronounced negative impact on growth. Hence, investments could be channelled intorevenue-generating non-oil sectors.
b. A drawdown from GCC countries’ considerable reserves toprop up the economy could be considered.
c. Public Private Partnerships and Foreign Direct Investments could aid in private sector growth.