Global stocks staged a quick recovery from the March lows

The year began with global stock markets reaching new highs in February. However, global markets saw massive falls in March as the COVID-19 outbreak became a global pandemic. At its lowest point in March, the S&P 500 saw a drawdown of 34% from the record highs seen just a month earlier in February. However, the index recovered the losses and reached new highs by October in a mere time span of seven months. 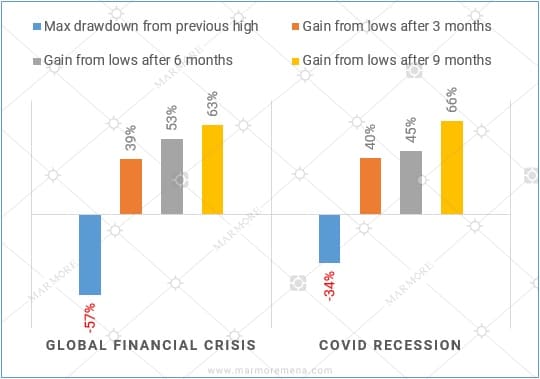 However this time, swift action by central banks and governments around the world and medical breakthroughs helped in the dramatic turnaround. The U.S. Federal Reserve, Bank of England, Bank of Japan and the European Central Bank have collectively spent USD 5.6trillion this year on quantitative easing, according to Bloomberg Economics. Central Banks have used tools like interest rate cuts and massive purchases of public and private debt to pump money into the financial system. These actions have stabilized financial markets and supported economic growth.