“Those who cannot remember the past are condemned to repeat it.”- George Santayana 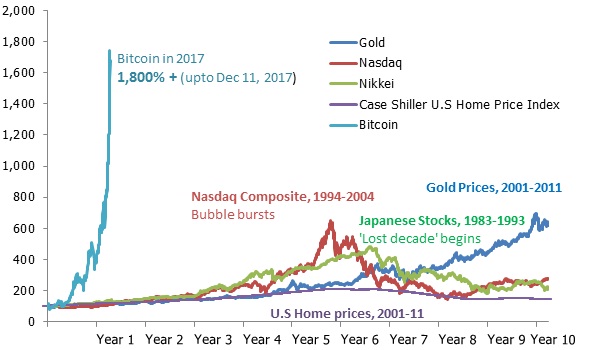 The world of finance has seen asset bubbles every few years and the occurrences of a crisis seem to have a shortened cycle in the past eighty years. Since the 1960’s, the world has seen some extended and protracted asset bubbles – Japanese real estate (1980-2003), Japanese stocks (1982-1992), Tech Bubble (late 90’s to early 2000), U.S subprime crisis (2003-2011), Chinese stock market (2005-2008), Oil (2005-2008) are arguably some of the crisis that vaporised millions of dollars’ worth of wealth. Some of the other historically remarkable crisis in the history includes Tulip mania (1619-1622), Mississippi Bubble (1716-1719) and South Sea Bubble (1719-1722). All of the crises share a similar trait – investor euphoria, hubris followed by an equal disbelief when prices comes crashing down. In all of these bubbles, investors strongly believe that they have made a good investment regardless of the price that they pay and there would always be someone to buy at a higher price. 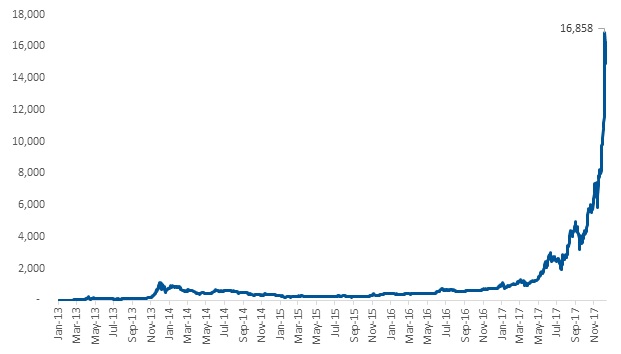 In this light, bitcoin rally is nothing short of spectacular despite the warnings from industry watchers of bitcoin being a bubble. Some analysts called it a bubble when the bitcoin was trading at USD 1,000 but were left in the dust by the bitcoin’s relentless rally. An interesting fact about bitcoin is that the rally has mostly been fuelled by individual groups without much participation from the stalwarts of Wall Street, which we see as being consistent with the currency’s founding principles of being anti-establishment and fully decentralized.

Search “Bitcoin” on google and you’ll be welcomed by a stream of advertisements that would most likely contain the phrases “Are you looking to invest in bitcoins?”, “Bitcoin investment at low fees?” and “How to buy bitcoins?” Bitcoin started off as an utopian experiment that was aimed at solving the problem with fiat money and reducing the mechanics that go onto put the trust that fiat currencies have (central banks, treasury, full faith of the government etc. costs money and not always explicit). But the palpable enthusiasm with which bitcoin is trading now seems to undermine all that qualities that made it appealing in the first place and now risks being seen as merely speculative investment which could very well turn out to be a bubble.

Bitcoin enthusiasts argue that cryptocurrencies are rapidly transforming into mainstream currency and that it will offer serious competition and eventually replace the existing national currencies issued by central banks. Further, the current euphoria surrounding the rally is seen as a validation of bitcoin’s claim as the currency of future. Finite supply and the disruptive technology that underpins its functioning – ‘block chain’ has added to its exotic appeal.

On the other hand, financial commentators have been quick to point out the dot com bubble as a cautionary example. Acceptance of bitcoin as a widespread medium of exchange for the purpose of trade and commerce is yet to be seen. Recent research by Morgan Stanley noted that the bitcoin’s acceptance is “virtually zero” and declining. It pointed out that only three of the top 500 online merchants accept bitcoin as a form of payment.

Are bitcoins in a bubble?
In financial markets, bubbles are spotted by comparing the traded price of an asset to its fair or fundamental value. For stocks, the earnings are compared to its stock price. For commodities such as oil or metals, the cost of production along with demand/supply dynamics dictates the price trends. For currencies, real effective exchange rates are of help. The primary problem with valuing or pricing bitcoin is the lack of a mechanism for valuing them or pricing them based on fundamentals; none exists.

Bitcoin also does not fit in the framework of a conventional investment. With no clear cut way to establish valuation using the fundamental parameters, and no observable relationship with economic or other parameters, bitcoin price is established purely based on demand/supply dynamics. Price rise defy gravity when limited supply is met with insatiable demand. Bitcoin supply is capped at 21million and an estimated 16.7million has already been mined. Even among the existing supply, a few million is expected to have been lost forever due to hard disk damages and forgotten passwords. Scarcity premium and lack of means to establish fair value offers a fertile ground for speculators.

What explains the stellar rally?
The fear of missing out on stellar gains that could be achieved within a short span of time, days or even hours, has likely pulled people from all walks of life towards bitcoin. Traditional assets offering minimal yields in a low interest rate environment could have pushed investors into risky bets such as bitcoin. Those who have experienced the burst of dot com bubble could recollect the eerie similarities in bitcoin rally that is fuelled by emotion rather than underlying fundamentals.