GCC Investors have flocked into British Real Estate
Sovereign Wealth Funds (SWFs) & private investors from gulf, particularly Qatar, Kuwait, KSA and UAE, have purchased prolific properties in Britain, largely in London. Indeed, a part of London is referred to as ‘Qatar Quarter’ due to the sizeable investments made by Qataris. London-based Rokstone estate agent estimates that Qataris own property worth more than one billion pounds (USD 1.34mn) in Mayfair, one of London’s richest areas.

Quantum of Investments
Total investments made by gulf investors in Britain are estimated to be about USD 200bn, of which USD 45bn (23% of total) could be in real estate (CNBC Arabiya). Moreover, Britain is believed to account for as much as 40 percent of all Gulf investments in European property.

Kuwait Investment Authority (KIA) is also a major investor through its London-based Kuwait Investment Office. In 2013, it said the fund had more than doubled its investment in Britain over the previous 10 years to more than USD 24bn. Like Qatar, Kuwait owns London landmarks such as the 13-acre More One development (bought for USD 2.7bn) on the south bank of river Thames which houses the headquarters of the mayor, as well as buildings in Canary Wharf. It has also focused on infrastructure investments through its Wren House Infrastructure Management arm set up in 2013.

Investors from the UAE accounted for more than 20 percent of buy-to-let property sales in the UK in 2015 (Chestertons).

Performance of London Properties
London real estate is one of the most sought after investment due to its unparalleled connectivity, political stability, transparency and clear titles and varied economic opportunities that it offers. It is also one of the most liquid real estate markets in the world. Historically, property values in central London’s most expensive neighbourhoods had increased by 4.6% year-on-year while rental yields – returns from rental income – had averaged 3.7%. In the past seven years, investors in London real estate had benefited from 70% growth, and it is expected to achieve a cumulative capital growth of 19.1% over the next five years (Cluttons). 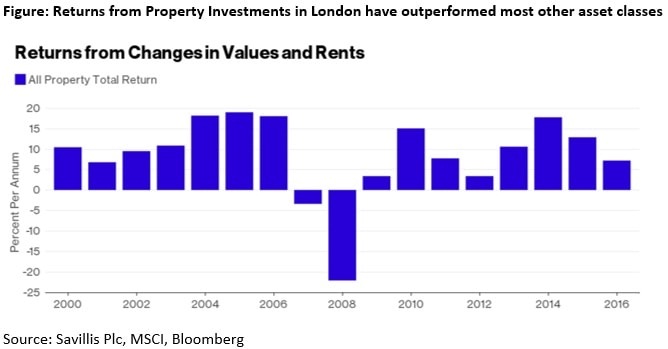 The fall in value of pound against GCC currencies (which are mostly pegged to U.S dollar) would directly reduce the value of investments by 8-10%. Continued inflow to safe haven assets such as U.S treasury would steadily rise the value of dollar against British Pounds. 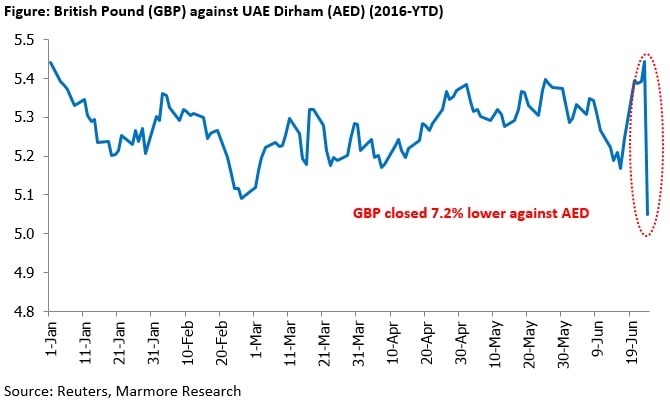 What will happen to Real Estate Investments in Britain?
The fall in pound’s value will directly affect the investments made by GCC investors. If Britain’s economy plunges into recession, business investments would be curtailed, and demand for commercial real estate would be depressed. In such a scenario, Bank of England would further lower its interest rates and inject liquidity to revive economy.

As a result, in the near-term, combination of negative sentiments and fall in currency value would weigh on asset prices. In the mid-term, this could draw attention from overseas investors, who enticed by Britain stature as a G-7 member nation with a strong track record of achieving economic growth, might look to acquire assets.

As the dust settles, in the long-term, underpinned by fundamental qualities of Britain such as 60mn wealthy consumers, skilled workforce, stable governance, GMT time zone would augur well for the economy and investments. 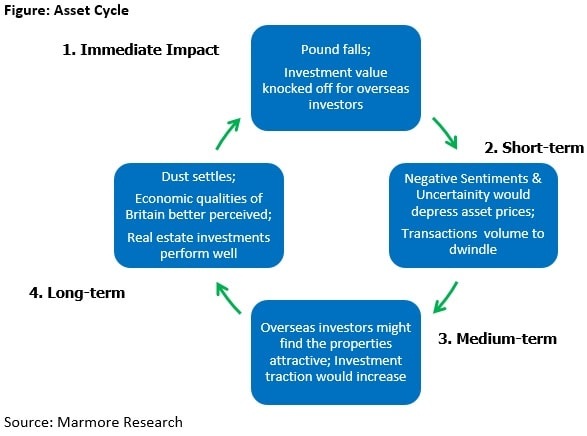 Impact of Brexit on Real Estate Value
Realty agents and analysts opine the exit from EU would end the housing boom in Britain bringing the price rises to an abrupt halt as the consumer confidence would take a beating due to continued uncertainty, expectations of slowing economy and growing unemployment. Office realty is bound to be affected where construction projects (new supply) are at a record high.

Short-term performance remain muted due to Brexit fears
In the near term, value of residential property in upmarket areas popular among Gulf investors – including Chelsea, South Kensington and Knightsbridge – fell 3.5% to 7.5% for the year in May (Knight Frank). According to the Bank of England, overall flows of foreign capital into commercial real estate in Britain stopped in the first three months of 2016. Further, transactions in commercial property fell by 40 per cent in the first quarter. Realty transactions are bound to be thin as buyers would prefer to ‘wait and watch’.

Commercial real estate, especially office spaces, would be hit as multinational organizations reassess their strategy to stay in London, which so far had served as a gateway for EU markets. It is estimated that over 100,000 jobs could be relocated out of London and as a result office rents could drop by as much as 18% in the next two years (Jefferies (Mike Prew), sourced from Financial Times).

London as a Financial Hub could be Threatened
HSBC has already moved staff to Birmingham and Credit Suisse plans to slash thousands of jobs. JPMorgan has earlier warned that a vote to leave could lead it to cut jobs and there’s a chance other U.S. investment banks would follow suit. GCC Banks which have their subsidiaries in London might reassess their strategy or may downsize their operations in London and relocate to continental Europe.

Real Estate Deals could be held back
Investors were still working on deals without finalising them until the picture becomes clear. Uncertainties about the legal and regulatory framework that would result from a Brexit is a worry. For instance, QIA is considering abandoning the sale of 1 Cabot Square, an office building in London’s Canary Wharf financial district leased to Credit Suisse Group AG. The 546,114-square-foot (50,736 sq mt) office block, was put on the market earlier this year, is valued at about 450 million pounds (USD 594mn). It was the first major property offered for sale by QIA since its creation in 2005 (Bloomberg).

Exposure to Equities in LSE
QIA’s portfolio includes Barclays (4.8% stake), Sainsbury’s (25% stake), London Stock Exchange (10.3% stake) and Royal Dutch Shell (0.9% stake) among others (overall USD 5.3 bn). Abu Dhabi Investment Authority (ADIA) exposure is worth USD 2.78bn which are spread among 109 stocks. KIA, on the hand has a direct exposure of only USD 0.58bn in listed equities that are spread among 35 stocks which are traded in LSE (Reuters). 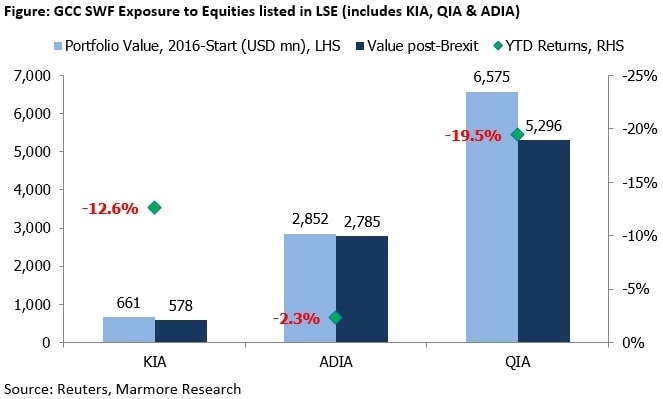 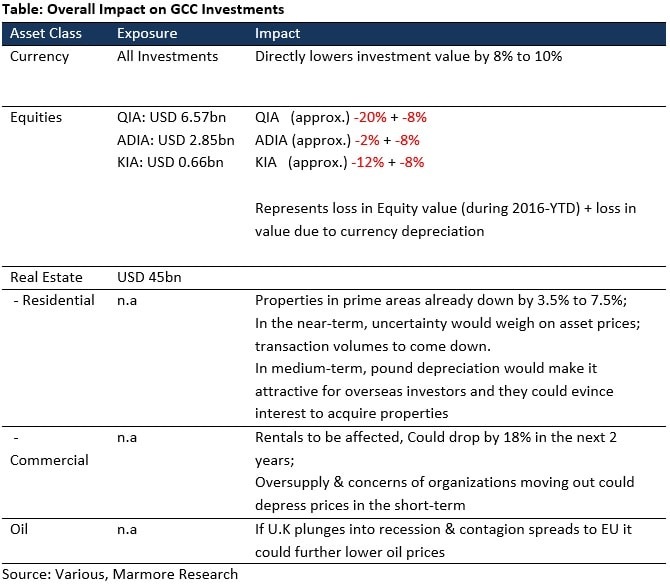 Way Forward
Currency devaluation and lower interest rates could spur inflation over the medium-term. Moreover, Britain’s economy, underpinned by over 60million wealthy consumers and a skilled workforce, will have plenty of economic opportunities to offer. In such a scenario, real estate investments will prove to be fruitful.

Having said that, it shall be prudent to further diversify investments into regions such as continental Europe, U.S and Asia. For instance, QIA has already embarked on such approach. QIA which hitherto had heavily invested in Britain is investing more into U.S and Asia in the last couple of quarters.