Can Dubai’s 3D printed building vision be a template for addressing the housing crisis in the GCC?

This article was originally published in AME Info.

According to a recent study from the World Economic Forum, the Infrastructure and Urban development industry worldwide, have a stagnant productivity due to its failure to innovate as quickly as the other sectors. This has caused a negative effect on the economy, society and the environment. Despite robust economic growth and the affluent nature, the GCC region has been experiencing a housing shortage.

GCC housing crisis is spurred by macroeconomic drivers like urban population growth and the age structure. The working age population growth (worker’s spread increase the demand for new households and the willingness to consume better housing rises) in the GCC is significantly higher than the World and the MENA average.

Also, the steady increase in the urban population in the region (85% of the population lives in the city, expected to rise to 90% by 2050(PwC)) has hit harder on the lower and middle income households. Thus the pressure of housing affordability has been increasingly felt by the government and the population across the region.

Deloitte reports that significant affordable housing is required across Saudi Arabia, Kuwait and Bahrain. The GCC nations have planned new housing schemes to solve these shortages, Kuwait plans to build $14bn residential city with 35,000 units and Saudi Arabia to build 100,000 units over the next seven years in Riyadh(Deloitte).

The complexity inherent in the design and construction of buildings as GCC nations urbanise causes a serious challenge to have an affordable place to live. In addition shortage of qualified workers is one of the key reason for the industry’s stagnant productivity( World Economic Forum). Besides bringing changes in the housing policies, housing finance to solve the housing market shortage, technological advances like 3D printing can be well applied to meet these challenges.

3D printing is a technological breakthrough in the construction industry that changes the traditional way of construction process itself. 3D printing refers to the production of physical objects layer by layer by an automated computer-controlled machine. This can potentially increase the productivity across the sector as it involves more standardised elements with limited finishing work constructed on-site. 3D Printing can effectively reduce the cost (finance, materials and labour)(PwC) and increase the demand in the sector. Realizing the potential, UAE has launched the ‘Dubai 3D printing strategy’ that aims to promote Dubai as the leading hub of 3D printing technology by 2030. 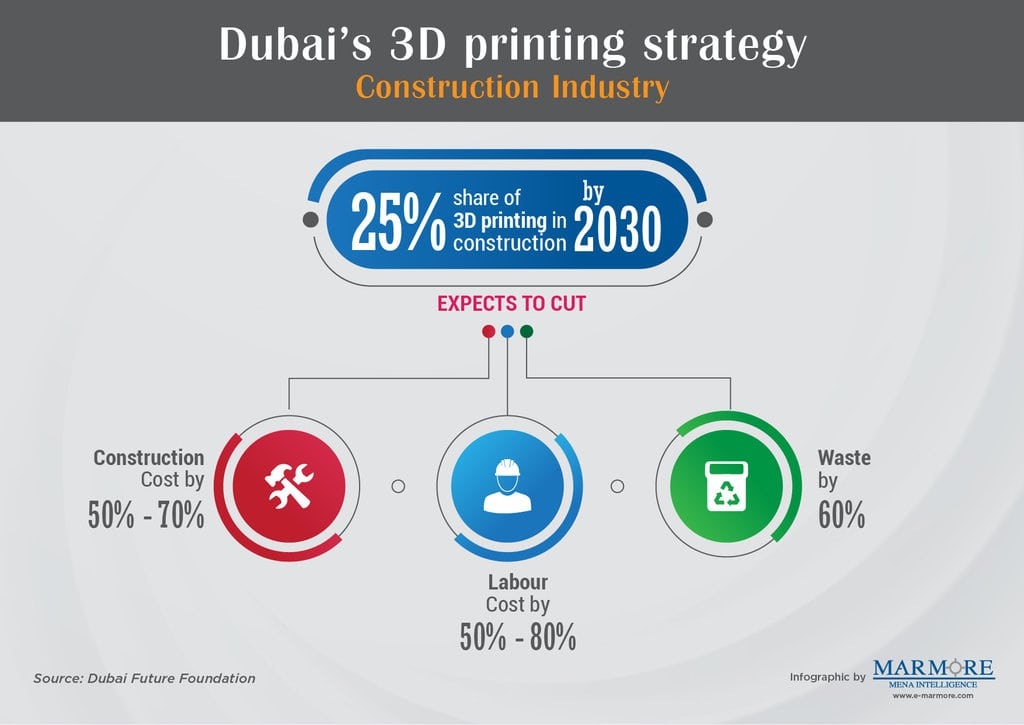 This initiative marks to bring positive economic returns and contribute to sustainable economic development. As a part of the initiative, Dubai operated the first 3D printed office in the world in 2016 (Constructed by Winsun). It also focuses on the construction of buildings for humanitarian causes, mobile homes, villas and so on.

These benefits of the 3D technology itself could solve the major challenges in the construction industry (Labour and Cost) paving ideal way to combat the housing crisis in the GCC region.

3D printing devices and materials are constantly evolving offering many benefits to the user. There are a number of start-ups offering 3D printing services by creating new, innovative projects (BCG and World Economic Forum).

Winsun- Shanghai based company produces 3D printed houses at scale. Using 3D printed technology, construction units are pre-fabricated off site. This has increased the productivity and has caused significant cost savings. With Winsun approach, a standard house is built for about $30,000 and a new building can rise one storey per day.

Apis Cor- San Francisco based start-up prints entire house on-site rather than creating individual elements off-site and transporting them. The firm strongly believes that 3D printing is a solution to the housing crisis.

Realising such smart technology enabled development require considerable integration of government and the private sector. Adoption of 3D printing in the construction industry requires changes across legislations, funding, research and other public policy measures. Dubai has scaled up and created such incentives in five pillars to meet its 3D printing strategy namely infrastructure, legislative structure, funding, talent and market demand. Thus Dubai’s vision of technological application and creating a conducive market for 3D printing can increase productivity in the sector and aid to solve the housing crisis. This strategy could help the region and the world as it could be a prototype to better understand and take advantage of the 3D printing technology.