Can Riyadh rival Dubai as a financial hub?

Both Saudi Arabia and the UAE are oil rich countries. In order to reduce their dependency on oil revenue the two countries are diversifying into non-oil sectors. In fact, the UAE has a head start as it already has more than 50% of its GDP now come from non-oil revenue. Both countries have welcomed Foreign Direct Investment (FDI) to help diversify and provide employment to its teeming millions.

Dubai leads the way
Currently, other countries in the GCC region are trying to emulate the growth strategy of Dubai financial center. While Qatar Financial Center (QFC) is specialized in insurance and asset management segments, Bahrain is dominant in Fund Administration, Islamic Finance and Offshore banking. In fact, Abu Dhabi is also trying to establish itself as a financial hub, positioning itself to specialize in private banking, wealth management and asset management. Its non-restriction on foreign ownership in free trade zones provides Abu Dhabi an edge over GCC peers. Though the competition among the GCC countries is rising, it is not a zero sum game as every center has its own specialization that enhances the reputation of other centers, thus helping the GCC countries to grow as a whole.

The Dubai International Finance Center (DIFC) was established in 2004 as a financial free zone regulated by DIFC Authority. DIFC has its own laws and court system to create an efficient environment to provide a specialized platform for investments and private banking. It offers various incentives to attract investors. It allows 100% foreign ownership and the profits are tax-free. It does not restrict foreign exchange and its infrastructure adds to its positives.

Nasdaq Dubai exchange situated in DIFC has issued USD 13 billion in Sukuk (Islamic Bonds) in the year 2014 to create market for Islamic bonds by assembling leading investment banks. DIFC has observed 18% growth in number of companies; increasing the number of business located in DIFC to 1,225 comprising of 362 financial services firms, 682 non-financial services firms and 171 retailers. 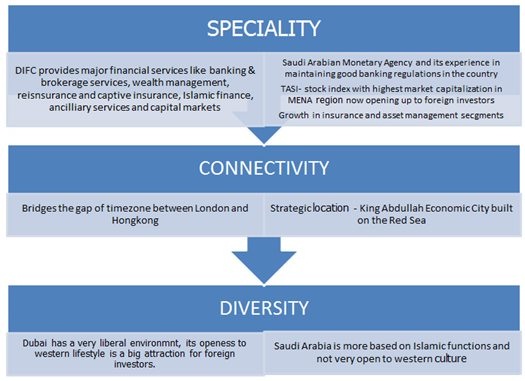 Riyadh has some distance to go…
The government in Saudi Arabia has created industrial sites to attract FDIs. It has also built the King Abdullah Economic City to spread its wings globally and become the financial hub in MENA region. But to become an international financial hub, Riyadh must first focus on becoming a regional hub.

Riyadh, which is the headquarters of the GCC Monetary Council and could host the GCC central bank, is a step in the right direction. It is set to open its USD 540 billion equity market to international investments. Few positives that will prove attractive to investors include its favorable demographics comprising growing young population, increasing expenditure by government of around USD 130 billion to boost the non-oil sector, availability of energy at low prices and scope for further growth and development.

The Tadawul Stock Index is one of the top ten performing indexes in terms of USD compared to other more than 90 stock exchanges tracked by Bloomberg globally. It has the largest market capitalization in the region of USD 540 billion, which is same size as market of other GCC countries combined.

But there are various restrictions imposed by the Saudi government that limits Riyadh from becoming a financial center of choice. Saudi Arabia’s implementation of Qualified Foreign Investment (QFI) scheme limits the access by foreign investors to its domestic market. Holding of shares of all issuers by QFIs and QFI approved clients in aggregate has been limited to 10% of market value and 20% is the maximum that QFIs can hold in an individual stock.