Does Brexit pose an economic puzzle to the GCC?

The UK’s vote to leave the European Union caused a period of uncertainty both in the financial markets and the political environment. The UK is the fifth largest economy in the world, and the Brexit process will have major economic repercussions. This led to countries and business entities strategizing their activities to respond to Brexit. The prospective cost to UK’s economy and impact of Brexit has brought into prominence its relation with the Gulf countries in the form of prospects for a free trade agreement, a rise in defense spending in Gulf Co-operation Council states and reaffirmed bilateral ties with many GCC countries.

EU-GCC Trade: Current Scenario
The EU-GCC cooperation agreement of 1988 provides the framework for economic and political cooperation between the EU and GCC countries. The total goods trade between EU and GCC amounted to €143.7 billion in 2017. The graph below depicts the European Union’s Total Trade with GCC during the period 2007-2017. 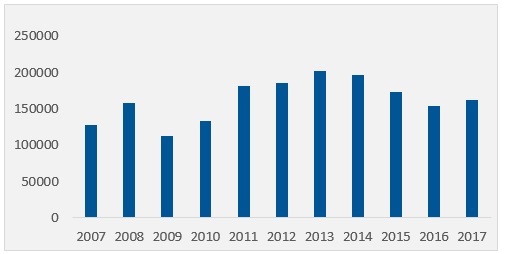 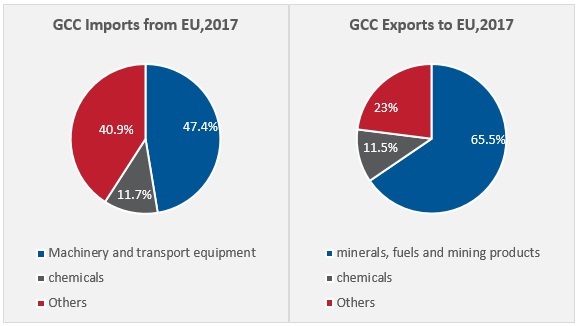 Only 32% of GCC imports from the UK are in services sector, largely dominated by the health and education sectors. However, in the long term, the growing consumer market in the region is expected to provide worthwhile investment opportunities. The GCC has a young and growing population with high income per capita.

UK’s Trading Relationship with the GCC
United Arab Emirates (UAE) conducts significant trade with UK, it is also the largest entry point for goods for the GCC. The UAE is the UK’s biggest export market in the Middle East, fifth largest outside the EU, and twelfth largest globally. During the period 2009 to 2016, UK exports to the UAE increased annually by 6.8%. Top imports from UK include power generating machinery and equipment, electrical equipment, transport equipment and vehicles, precious metals, pharmaceuticals and medical equipment, and food & drink. Exports from the UAE are largely dominated by petroleum based products and then precious metals. Emirates offers 42 flights in a week between UAE and Birmingham, indicating the current state of trade between the two countries.

Is Brexit the boon for GCC?
There exists the speculation that EU’s loss will work in favor of GCC countries. Analysts predict that UK’s historically good relations with Gulf countries will be further strengthened by Brexit. Brexit will enable the UK to pursue a more open economic policy. In a noteworthy move, Dubai will permanently host a team from UK Export Finance (UKEF), the British Government’s export credit agency. This would make GCC the fourth international market to have a dedicated UKEF team after Indonesia, Brazil and Turkey. UKEF already financed approximately £2bn ($2.85m) of GCC projects that procured UK exports between April 2016 and April 2017, including notable contributions of $220m in support for Dubai Arena. The UKEF has the capability to provide flexible financing across to support the GCC countries’ diversification plans in the sectors of education, health care, life sciences and creative sciences.

The most immediate and visible impact of the referendum is seen on the valuation of the pound, which fell during June 2017 and is at 1.28 to the dollar. The drop in the value of pound indicates potential British investment offerings especially for GCC.

In the wake of Brexit, British businesses are keenly exploring new markets and talent pools. Dubai is one of the best available options that can facilitate as an entry point in GCC. The Dubai Multi-Commodities Centre (DMCC), one of the world’s leading free zones for commodities trade reports that 66.5 per cent of the firms are considering Dubai as a business destination as part of their international expansion. Geographical location, business-friendly regime, growing marketplace for commodities, financial services and increasing number of specialist industries are the reasons favoring Dubai.

During the period between the announcements of Brexit until February 2018, DMCC saw an increase of 29% in UK companies setting up their business in the free zone. There are over 1350 British companies in the free zone with DMCC hosting 27 percent of SMEs. DMCC reports that out of the UK businesses open to expanding into overseas markets, 40% would consider the Middle East and 75 percent would consider Dubai as prospective location for expansion or relocation.

The GCC region is projected to emerge as the leading business hub in the wake of uncertainties surrounding Brexit. The UK has identified USD 38 billion worth of new opportunities annually for British businesses in different sectors in the GCC region by the year 2021. The GCC governments’ efforts in economic diversification has resulted in the region evolving into a leading business destination. UAE in particular has been a favored place for entrepreneurs and it is estimated that its position will strengthen after Brexit. British businesses are among the top three nationalities in the Free Zone. British American Tobacco, mining group Rio Tinto, Dyson, John West and Deliveroo are a few British companies already present in DMCC.

Brexit presents the prospect of Free Trade Zones becoming more appealing all over the world with Britain itself becoming a hub for economic free zones. In such instance, successful free zones like Dubai are likely to become useful advisors or operators.

Analysts predict that Brexit can strengthen UK’s relations with Saudi Arabia who is also in the path towards its grand Vision 2030 in terms of a free trade deal.

How did businesses react to Brexit?
Brexit generated tension across the political and economic spheres with its uncertainty continuing till date. The lack of a clear standpoint has resulted in loss to the GCC region to an extent. A number of British firms have scaled down or ceased their businesses in the Gulf countries due to a projected dim economy as a result of Brexit. ‘7 Days’, owned by Britain’s General Trust and the Daily Mail stopped the 14 year publication of the tabloid in Abu Dhabi and Dubai in December 2016. In February 2017, Killik&Co., the British investment and financial consultancy firm terminated their 10 years of activities in the Gulf region. During the same period, Britain’s biggest construction and infrastructure investment company Balfour Beatty announced the sale of its entire Middle East business for USD 13.68 million to its UAE’s joint venture partner Dutco. Britain’s second biggest construction service firm Carillion that operated in the region for decades entered into compulsory liquidation in the beginning of 2017.

The British currency is predicted to weaken, having an adverse impact on the property market of the Gulf States and resulting in reduced investment from British institutional and individual investors. This is because all GCC countries, with the exception of Kuwait have their currencies pegged to the dollar. Thus a lower Pound Sterling indicates lesser buying power for GCC.

A similar pattern can be noted among the Gulf Arab companies functioning in London. Gulf Finance House, Bahrain’s major Islamic financial institution delisted from the London Stock Exchange (LSE) in 2015 stating the lack of activity in the bank’s Global Depository Receipt (GDR) on the LSE. Dubai Ports (DP) World, the third biggest commercial port operator in the world pulled out of the LSE in 2014, much before the Brexit referendum. However, it is not certain if the impending Brexit was the cause of DP World’s withdrawal. Global brands are transforming their strategies and international business outlook in response to Brexit. Financial firm such as Japan’s Daiwa, Sumitomo Mitsui Financial Group, Deutsche Bank and JP Morgan are increasingly shifting their focus from London to Germany.

Britain’s potential exit from the EU has increased the level of uncertainty that could further dampen global economic growth by delaying capital expenditures and weakening global consumer confidence. For the oil and gas sectors, the impact will be minimal since Britain is responsible for only 1.6% of total global consumption.
The reaction of GCC Sovereign Wealth Funds is noteworthy. The Institute of International Finance (IIF) reports that a significant part of GCC’s Sovereign Wealth Funds could move out of UK to more mature and emerging economies with Brexit becoming a reality. The SWFs of Qatar, Kuwait, Saudi Arabia and the UAE, once active buyers in the British property market are slowing down their activities.

Conclusions
The GCC has Free Trade Agreements (FTA) with various countries and blocs. In the event of Brexit, the possibility of an FTA between the UK and the GCC is high. The fast-growing Gulf markets are seen as an important outlet for British exports. This gives UK exports a competitive edge and enables them to achieve remarkable gains though its imports from the GCC such as petroleum, petrochemical and aluminum products. Any free trade agreement between the GCC states and UK is expected to double the existing volume of trade amounting to $27 billion. Gulf investments in the UK exceed $140 billion, most of which are focused on real estate. It is also expected that the UAE-British trade will go from $19 billion in 2015 to $33 billion in 2020.
As it is assumed that sterling would devalue, the UK companies and London property prices would become more attractive to institutional and private investors from the Gulf. However, there exists the possibility of largescale intervention of the UK government in such an instance which could diminish foreign and particularly Gulf interest in the UK market.

In order to boost the trade, GCC should lower the restrictions that the British firms face.  The UK-GCC joint working group on trade intends to address these restrictions. However, the group is bound by the EU-GCC common commercial policy which means that the parties cannot action any deals until Britain formally leaves the union, though they continue to develop strategies to enhance UK firms’ access to GCC markets.

The UK’s weakening ties with the EU could mean stronger ties with allies around the world including countries in the GCC. Amidst the persisting uncertainties, outlook remains positive for UK-GCC relations. However, this will depend on each country’s policies and economic cooperation when Brexit becomes an official reality.