This Article was originally published in AME Info.

‘Index inclusion’ is perceived as a landmark event in the capital market history and the recent news of  Kuwait upgrade to FTSE Emerging Market (EM) Index & possible inclusion of Saudi Arabia into MSCI EM Index has attracted significant attention and generated much fanfare. The act of market indices being included or successfully upgraded from one category to another is often an outcome of series of reforms that results in establishment of a reliable market system which builds investor confidence and subsequently attracts foreign capital. Historically, countries have seemed to gain with index inclusion in terms of market performance, liquidity and foreign inflows.

Among GCC countries, in 2014, UAE and Qatar were upgraded to the MSCI EM index following which the net foreign inflows into the equity market of UAE and Qatar stood at USD 300mn and USD 2,482mn, respectively.

Their inclusion which was implemented in three phases saw their indices outperform those of other GCC countries during this time period. Qatar’s index rose by 65% while Dubai’s rose by 245% and Abu Dhabi’s by 111%. The turnover ratio, an indication of trading volumes also rose. Turnover ratio of UAE’s stock markets increased from 38% in 2013 to 75% in 2014 while Qatar’s increased from 13% to 24% during the same period.
Liquidity improved for both UAE & Qatar in the year of Index Inclusion 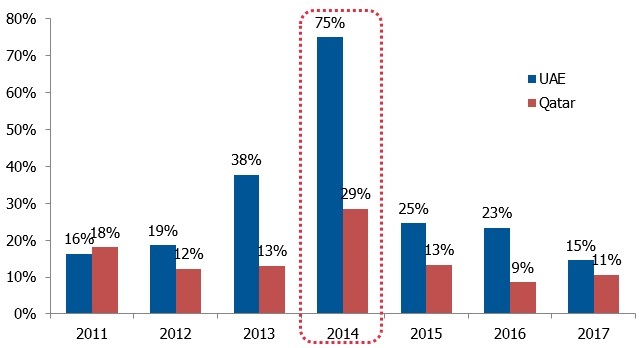 Liquidity in GCC Stock markets – Perennially Low
The equity capital markets in the GCC region have been characterised by low levels of liquidity for many years. Factors like large scale government ownership of companies, restrictions on foreign ownership, legal and administrative problems, information asymmetry have all contributed to very low participation in equity markets leading to low trading volumes and hence low liquidity levels. The turnover ratio (calculated as total traded value in a year/average market capitalization), a measure of market liquidity, is low for the GCC region with average level in the last 10 years standing at 65% as against the global average which ranges from 102%-162%(World Bank). Further, the liquidity of GCC markets has slumped to a historic low of 30% in 2017. Wide variations in market liquidity have also been witnessed; for instance, liquidity in Bahrain markets has been in low single digits in stark contrast to other markets such as Saudi Arabia.

Could index inclusion revive market fortunes?
In the recent past, Kuwait and Saudi Arabia have been promoted to ‘Secondary Emerging Market’ status by FTSE, which will be effective from September, 2018 and March, 2019 respectively. Saudi Arabia is set to have an index weight in FTSE Global Equity Index Series (GEIS) of 0.25% and 2.7% in the FTSE Emerging Index. The inclusion of Saudi Arabia is expected to bring USD 5.5bn in inflows as Saudi Arabian stocks are added by fund managers according to its allocated weight in the index. Also, the Saudi Aramco IPO upon successful listing would significantly increase the Kingdom’s weightage. Every USD 10bn of capital raised increases the expected weight of Saudi Arabia in the FTSE EM Index by an estimated 24 basis points. Assuming a 5% float and an IPO market capitalization of USD 100bn, Saudi Arabia’s weight could rise to 4.6% of the FTSE EM Index and to 6.6% of the index excluding China, matching Russia and surpassing Thailand and Mexico(FTSE Russell).

Due to the size of Saudi Arabia in the Emerging Index, FTSE Russell will implement its inclusion in four tranches to ensure mechanisms are operating as expected, thereby minimizing price fluctuations on the new constituents. Kuwait is to have an index weight of 0.04% in the FTSE Global Equity and 0.40% in the FTSE Emerging Index. The inclusion will be implemented in two tranches in the September, 2018 semi-annual review and December, 2018 quarterly review. The inclusion is likely to result in passive inflows of nearly USD 800mn into Kuwaiti stocks. These announcements have benefited Saudi Arabia and Kuwaiti stocks which have rallied 10% and 3.5% so far in the year while developed markets have largely fell.

Kuwait & KSA have witnessed sustained capital market Reforms
Both these nations have been undertaking reforms in their capital markets in the years prior to being promoted. These reform measures themselves can be responsible for increasing liquidity. Saudi Arabia opened its stock market to foreign investment on June 15, 2015 repealing policies that had earlier limited direct investment in shares of listed companies by foreign investors. Rules for QFI (Qualified Foreign Investor) were simplified in January, 2018 which in addition to the introduction of short selling and new corporate governance rules led to increased foreign institutional participation. All these reforms would increase liquidity in Saudi Arabian bourses.
Boursa Kuwait has issued a new rulebook which has specified a new segmentation of the market into three new markets, Premier Market, Main Market, and Auction Markets. A new set of Indices was also announced. The Premier Market would contain the larger and more liquid listed companies making it easier for investors to identify such companies. These companies may see more investor interest and share price increases. This classification will also incentivize companies with low liquidity levels to take steps to get promoted to premier status and benefit from it as a result.

What does inclusion in global indices like FTSE and MSCI mean?
Inclusion in global indexes like FTSE EM and MSCI EM indexes would bring the spotlight on markets leading to enhanced liquidity and increased capital inflow. Index inclusion increases investor awareness of country stocks leading to higher trading volumes. Also, the increasing popularity of passive investing has led to many global funds offering index funds which mimic global indexes like the MSCI EM index. When a country is included in these indexes, portfolio rebalancing by index funds leads to an increase in demand for the company’s stocks which increases trading volumes and also share prices.

Studies have indicated that when emerging markets are included in global indices, there is greater integration with the global financial markets resulting in risk sharing between local and foreign investors(Research Papers in Economics (RePEc)). This leads to a fall in equity risk premium and lowers the cost of capital thereby drawing new and additional investors resulting in increasing trading volumes. The share prices too go up as a result drawing even more investors and a virtuous cycle develops.

What is in store for the future?
Both these countries, Kuwait & Saudi Arabia, are now trying to get included in the MSCI Emerging Markets index to which USD 1.6 trillion worth of assets are being benchmarked. Inclusion in this index would lead to more foreign inflows and serve as a shot in the arm for boosting liquidity. MSCI is expected to make its decision on Saudi Arabia in June, 2018 and if it decides to include Saudi Arabia, then additional passive inflows to the tune of USD 10bn are expected. As Kuwait and Saudi Arabia undertake further reforms in their capital markets to comply with MSCI requirements, apart from the index inclusion being a boost to liquidity and share prices, the reforms themselves along with higher earnings growth, enhanced investment options due to new business listings and introduction of new products would go a long way in solving the problem of low liquidity and in attracting capital inflows into the market on a sustained basis.