Dubai Stock Market: Is this just another correction? 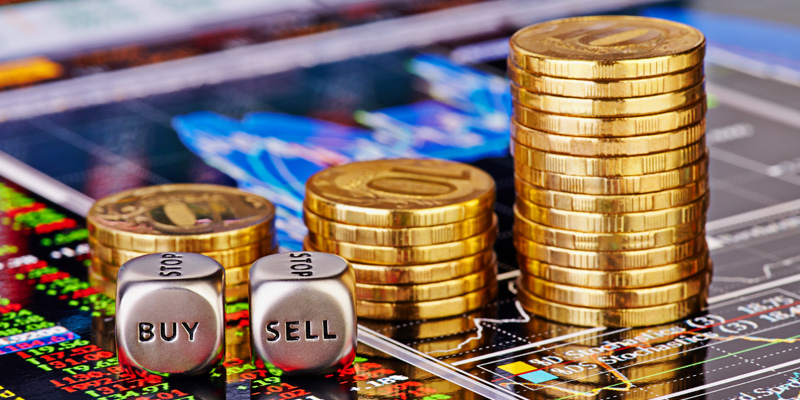 For over two decades, Dubai has prospered as one of the fastest developing international cities, attracting people and capital from all across the globe. In 2009, Dubai needed a $20 billion bailout from oil-rich Abu Dhabi to escape a debt crisis caused by collapsing property prices. Dubai’s economy roared back and has grown by a third since then, buoyed by foreign trade, tourism and its status as the main regional hub for business services.

Now, however, Dubai has hit another rough patch with residential property prices dropping by more than 15 percent since late 2014 and still falling. Economic activity in the Emirate has been lagging as real estate prices dropped and domestic demand faltered, prompting the government to announce a series of measures to stimulate growth. Traditional growth engines of Dubai economy such as real estate, trade, transport & hospitality have remained weak.

UAE’s Non-Oil Private Sector Purchasing Managers Index (PMI), an indicator of economic health, has increased to 55.3 in September of 2018 from a five-month low of 55.0 made in August showing some strength returning to the economy. After peaking out at 61.2 in late 2014, it fell significantly to lows of 51.7 in 2016. Currently it has been hovering around the mean level of 55 (Trading Economics). Credit card spending on consumer goods fell around 5% year on year in Q1 2018, leading to a slower growth rate in the consumer spending index of just 7% in Q1, 2018 compared to a nearly 12% rise a year earlier (ADCB Report).

The Dubai Financial Market General Index has tumbled close to 20 percent (Reuters, as of 14th of October) this year as real estate prices in Dubai have dropped and domestic demand has faltered. Real Estate and Construction stocks constitute a large portion of the overall Dubai market (>40%) (DFM General Index) and this has weighed down the general index, extending the loss for the year. On a valuation basis, the overall market looks highly undervalued, currently trading at a P/E of 7.5 when compared with the S&P GCC Composite Index valuation of 14.8.

Dubai Stock Market has been on a steady decline in 2018

Overall, the corporate earnings growth can be seen to be on a downward trend since the peak of 2014. Though we have witnessed healthy growth in earnings in the recent quarters, 19.4% for Q2, 2018 when compared with the same period last year – the growth has been on a base that has remained stagnant since the year 2016.

Individual Sectoral returns for 2018 paint a grim picture of the overall Dubai Market: 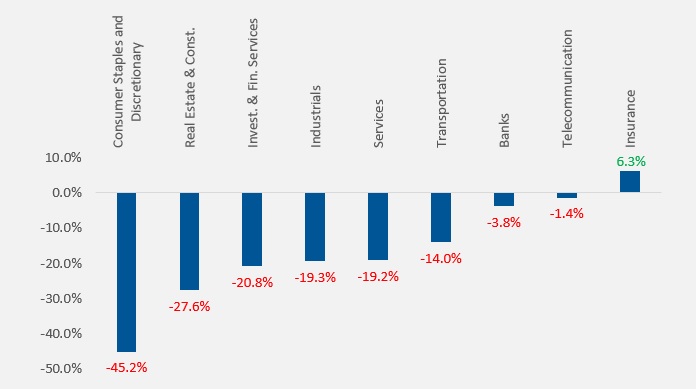 While looking at the individual sector returns, almost all the major sectors have displayed negative returns in 2018 with consumer discretionary and real estate leading the charts. The continued fall seen in the real estate markets and the lack of investor confidence in the midst of geo political uncertainties has led to negative returns throughout the market.

Top 5 gainers on a quarterly basis

While analyzing the top 5 gainers among blue chips, we see that almost all are dominated by the financial sector. The financial sector mainly the banks have benefited greatly from a rise in their interest income in 2018 due to the consistent rise in the Fed fund rates. Emirates Islamic Bank, Commercial Bank of Dubai And Ajman Bank have seen tremendous growth in their earnings growth the first and second quarter of 2018 as compared to the similar period in 2017.

Top 5 losers on a quarterly basis

On the other end of the spectrum when we analyse the top 5 losers among blue-chip, we see that they are dominated by companies from the real estate & construction and transportation & warehousing sector. Damac Properties and Deyaar Development have seen a continued fall in their quarter two earnings growth complementing the depressed real estate market in Dubai. However, the loss figures can be seen as somewhat narrowing when compared to the second quarter earnings growth of 2017, which can suggest that the real estate market prices may finally be bottoming out. The other sectors seen to be negatively impacted is that of transportation and warehousing and manufacturing with companies like Dubai Investments and Air Arabia registering large fall in earnings growth in the second quarter of 2018.

Reasons for the fall in the Dubai Markets
After years of registering strong growth, passenger growth at Dubai airport has remained muted fueling concerns that growth has saturated. Growth in passenger traffic through Dubai’s international airport has fallen to near zero this year, after 15 years of strong increases. Increasingly, long-range aircraft may loosen Dubai’s dominance as a travel hub connecting Asia and Europe.

TTourism has been subdued with Dubai hotel’s revenue per available room (RevPAR) decreasing by 13.3 per cent from USD 271 in April 2017 to USD235 in April 2018, attributed to an increase in both hotel supply and traveller preferences for more affordable accommodation (Dubai Statistics Center). Business sentiment has remained subdued with Dubai issuing 4,722 new business licenses in the second quarter of 2018, down 26 per cent from the same period in 2016, the year when new licenses peaked.

Earlier this month, S&P Global Ratings cut the credit worthiness of two local companies, Dubai Electricity and Water Authority to BBB from BBB-plus and DIFC Investments to BBB-minus one-step above junk status, from BBB, citing the weakening economy of Dubai. Thus, downgrade has added more pressure on the economy as Dubai does not have a separate sovereign rating like its neighboring emirate Abu Dhabi, the credit rating of its state owned companies is often perceived as an indicator for the economy.

Official data shows Dubai’s population continued to expand by 3.5 per cent to 3.08 million in the first half of 2018. However, most of the growth in recent years has been in lower-paid construction and services jobs, rather than in higher-paid white-collar posts. It is currently uncertain whether Dubai’s transportation industry and economic zones will be able to grow fast enough to attract and retain foreign white-collar workers needed to support the demand for its real estate market.

Dubai has been facing unprecedented competition from neighboring countries for capital, as low oil prices forced those countries to develop their own non-oil industries. Portfolio funds are already flowing from Dubai’s stock market to Saudi Arabia’s bourse. A recent Reuters poll shows that Middle East fund managers intend to allocate more money into Saudi Arabian equities while decreasing their exposures to UAE. The fund flows into Saudi Arabia have come partly at the expense of other markets in the region, particularly those in the United Arab Emirates.

Road Ahead for Dubai
The International Monetary Fund (IMF) expects Dubai’s economy to gradually recover as the government accelerates spending in preparation for the Expo 2020 event and estimate the gross domestic product to expand over 3% in 2019.

The Expo 2020 event in Dubai could drive up GDP growth by 2 percentage points between 2020 and 2021 by boosting job creation, consumption, and tourism. However, it must be kept in mind that much of the growth seen in 2018 is due to a big rise in state spending as Dubai builds infrastructure to host the Expo 2020 world’s fair. The 2018 budget rose to a record 56.6 billion dirhams (USD 15.4 billion), a 19.5 per cent rise from 2017 levels. It is unfeasible to imagine that the government can keep boosting its expenditure at this speed indefinitely.

Recent structural reforms, including plans to introduce long-term expatriate visas for up to 10 years, could help to boost the UAE’s population and consumer demand. The new UAE long-term and temporary visa system should facilitate retention of white-collar expatriates, which may increase expatriate incentives to acquire property and support real estate demand.

Potentially the most far-reaching reform was recently announced by the UAE cabinet, which would allow 100 per cent foreign ownership of some UAE-based businesses, up from the current 49 per cent limit. However, details of the new policy have not been released yet, and implementing it may be tricky. The existing free zones in Dubai already permit 100 per cent foreign ownership which could suffer if they no longer have this right exclusively.

The UAE cabinet approved plans in June for the insurance scheme to replace the previous system whereby employers had to provide a monetary guarantee to cover each of their workforce. The new UAE-wide insurance scheme may provide a one-time boost to corporate profits. The move is likely to free up capital that companies could choose to reinvest which could lead to a one-off 0.1 percentage point boost to UAE non-hydrocarbon real GDP growth (Bank of America Merrill Lynch).

The new Federal Government debt law lays the foundations for the development of a bond market in dirham denomination in the UAE. This is important as it will create deeper, more resilient financial markets, benchmark the yield curve, provide more diversified sources of financing, mobilise additional domestic savings and attract capital inflow. This would help reduce reliance on bank financing, external borrowing or withdrawals from SWFs. UAE’s non-oil economy is likely to turn next year with Dubai’s Expo 2020 infrastructure projects, changes to visa rules and increased government spending set to boost growth.