Emerging startups in the Arab region - Can they make it big? 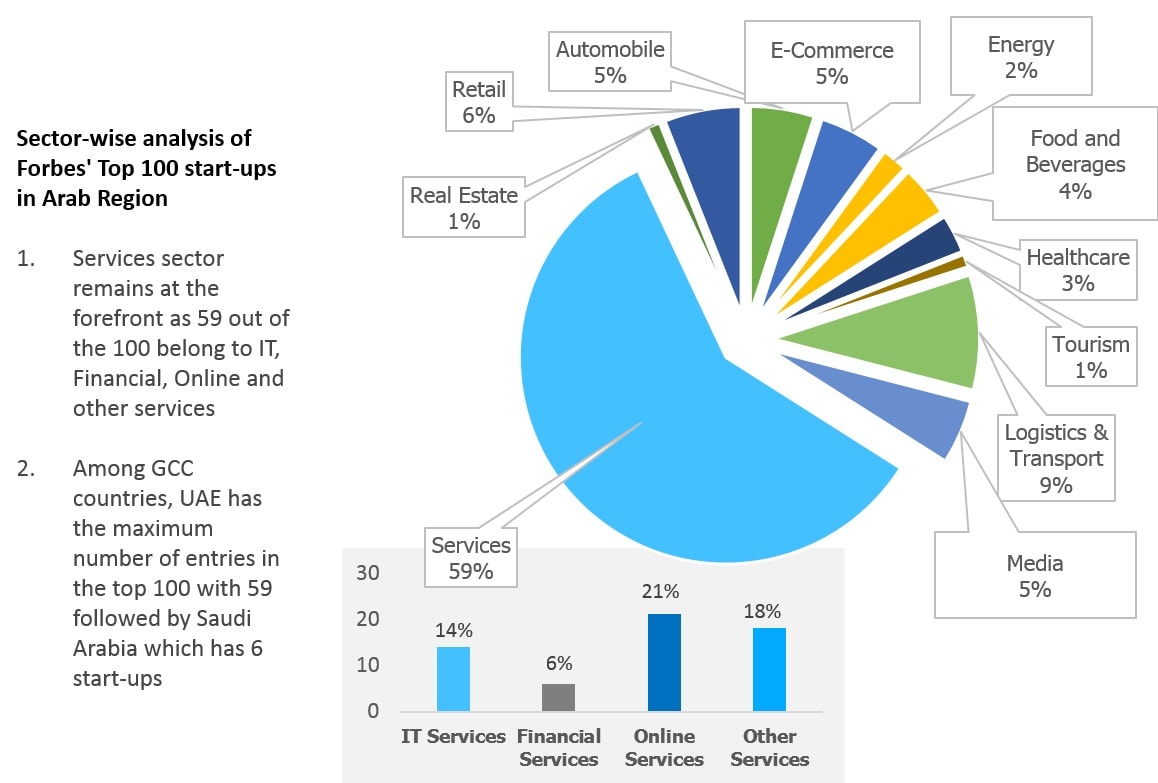 UAE – Start-up hub of the GCC
UAE has been the prime destination for budding start-ups in the Arab region offering a plethora of opportunities for prospective business owners. It is one of the most diversified economies in the GCC and home to some of the most highly valued start-ups in the region like Careem and Fetchr. Prime reasons to it are the measures taken by the government to improve the regulatory and policy frame work to encourage SMEs.

Currently, there are over 350,000 SMEs in the country which contribute to 40% of the GDP while employing 72% of the total working population (Bloovo). The proactive steps taken by the policymakers have helped UAE attain the 26th rank in the ‘Ease of doing business index’ for 2017 according to the World Bank and 35th rank in the Global Innovation Index. Also the presence of several startup accelerators and incubators in the country have helped entrepreneurs build on their ideas and get the support necessary to make their business a reality.

GCC start-ups – rising global investments
Investments in MENA start-ups have been seeing an uptrend over the past few years. Funding activity in the first nine months of 2017 (169 deals) have already surpassed the levels seen in the whole of 2016 (164 deals) (MAGNiTT Q317 MENA funding report card). Excluding Souq and Careem, start-up funding in the MENA region for YTD 2017 is at USD 254mn and on course to surpass the 282mn raised in the previous year.

The global outreach of GCC startups have also been on the rise, drawing attention from investors worldwide. When profiling the investors of top GCC 10 start-ups from the Forbes list, it is observed that more than half of them are based outside the base country with the majority being Venture Capitals.

The trend is seen in exits as well with companies based outside the MENA region showing interest to acquire GCC start-ups. Some of the major acquisitions in the past few years include Media.net by China’s Miteno (USD 900mn), Souq by global e-commerce giant Amazon (USD 680mn) and Talabat by US based Rocket Internet (USD 170mn).

Fetchr – The next unicorn start-up from GCC?
Fetchr is one of many emerging start-ups in the region which show immense promise. It is a Dubai based startup founded in 2012, which uses a smartphone’s location tracking capabilities in order to make product deliveries. The lack of clear addresses and postal codes for many areas in the UAE have made traditional deliveries a tedious process. Therefore, by allowing users to geo-locate the pick-up and drop-off points, Fetchr has come up with an innovative solution to make things simpler for package deliveries. Speed and accuracy of deliveries have been improved with the help of their patented technology in a region where getting things delivered could be quite complicated.

The logistics start-up has had a stellar year in 2017 as it raised USD 41mn worth funding in May, adding to its existing funds which will allow them to venture into other areas across the MENA region in addition to UAE, Bahrain, Egypt and Saudi Arabia where they are currently present. Fetchr was one of the first companies in the region to be backed by a top tier Silicon Valley Venture Capital as it raised USD 11mn in its Series A funding round backed by New Enterprise associates based out of the US.

Providing innovative solutions and understanding the local business landscape have helped Fetchr grow leaps and bounds while there is still scope for scaling up. Learnings from Fetchr’s case is that businesses need to view the pain points of the customer as opportunities and come up with solutions that will make their lives simpler.

Can they make it big?
Although the business environment in the GCC is not the most conducive for start-ups at the moment, steps have been taken by policymakers to encourage the development of SMEs. Considering the need for GCC economies to move away from Oil, more such steps are expected from governments to aid the development of the start-up space. With the emergence of global investments, startup activity has considerably risen in the GCC and going by the trend witnessed in the last decade, GCC start-ups are on the right track and several unicorn start-ups can be expected from the region.