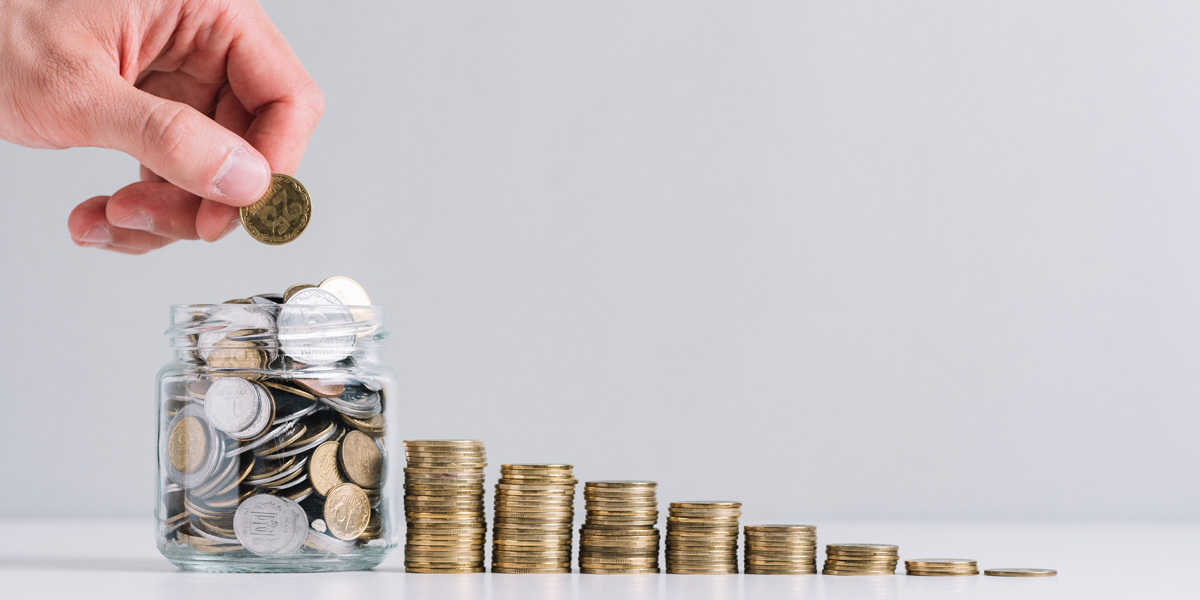 COVID-19 has been a double whammy for the Saudi Arabian economy. First, the lockdown and curfew measures has affected the economic activity. Second, because of global lockdown, oil prices fell with the demand for oil falling sharply. Therefore, the output of Saudi corporate sector is also expected to be very much low for the year 2020 if not beyond.

Saudi listed companies held fixed capital assets measured by the average outstanding investment in plant property & equipment (PPE) of USD 670 billion during the period 2015-2019. A bulk of this was accounted by Saudi Aramco to the extent of USD 216 billion (2016-19). 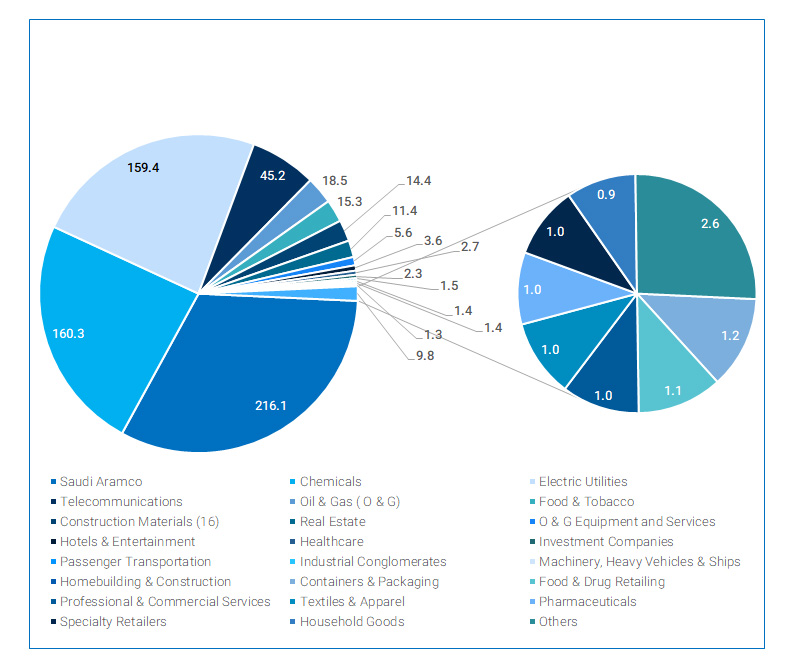 To measure the utilization of the assets,the average EBITDA to PPE ratio for the historical period of 2015-2019 was computed, which can be interpreted as the productivity of the fixed assets. The average EBITDA to PPE ratio for the listed companies was 0.35 with the ratio for Saudi Aramco the largest company being the highest at 0.90. Chemicals (that includes SABIC)the next largest sector had a very low ratio of 0.11, and Electric Utilities the next by size had a ratio of only 0.04 while Telecommunications was better at 0.15. Oil & Gas (excl. Aramco) comprising of refinery products also had a very low ratio of 0.05 due to the losses being incurred by some oil refineries. The ratios for the remaining sectors can be seen from Figure 2. 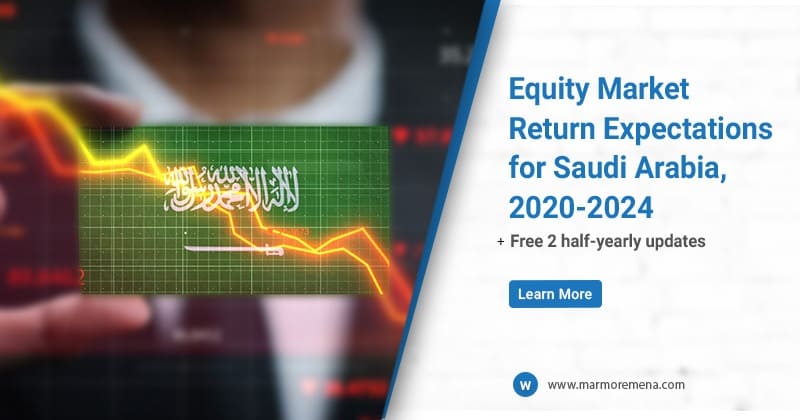 Ad: Marmore Research Report[/caption] The high ratio for Saudi Aramco shows the low oil production cost for the firm and the low ratio for Electric Utilities shows the long life of these assets, which leads to lower yearly ROA and low profits for the sector due to below market electricity prices in the Kingdom. Telecommunications being a profitable local business the sector’s ratio was better than the ratio for chemicals which is a highly competitive global business. Shipping business again being a very competitive long-life asset business generates low yearly ROA and hence the ratio was very low. 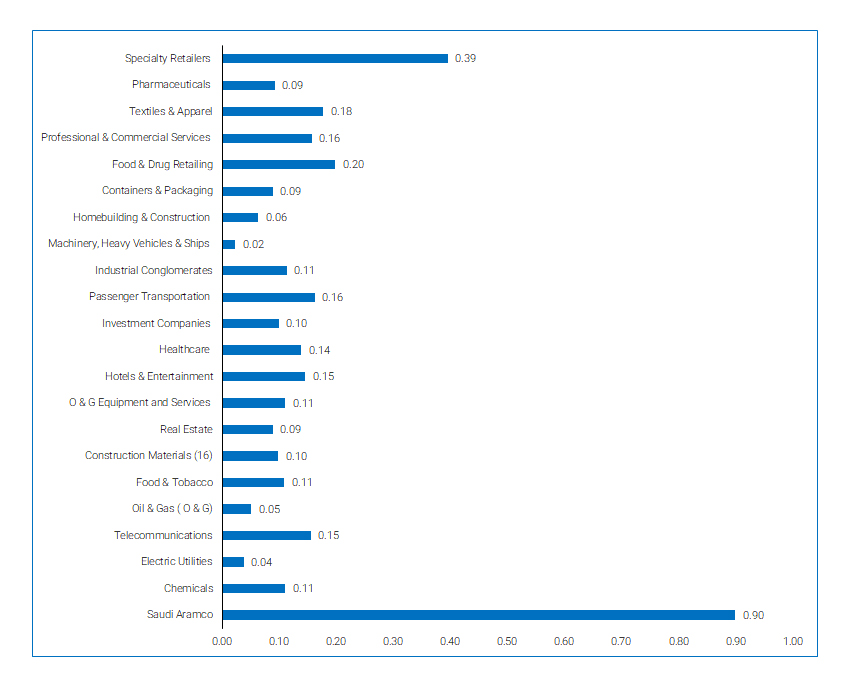 The average utilization of the assets generated by the different sectors is estimated by computing the potential EBITDA that should be generated in 2020CY using historical EBITDA to PPE ratio and comparing it with the estimated EBITDA by sector according to Mamore’s Saudi Economic forecast model for 2020CY factoring in COVID Impact, lower oil production and lower oil prices. The computations show that the overall utilization of assets (average for the companies studied) is expected to be as low as 54% for the year 2020CY. The utilization is most severely affected for Saudi Aramco (48%), rest of the Oil & Gas (51%), and Chemicals (66%). On the other hand, Telecommunications is little affected (91%) and Electric Utilities are expected to be unaffected (101%). The utilization percentages for other sectors are shown in Figure-3. As Aramco is impacted by both lower oil demand and prices both internationally as well as domestically and hence it shows below average utilization. As COVID-19 is not expected to have impacted them much, Telecommunications and Electric Utilities are expected to show marginally lower or better fixed asset utilization in 2020. Chemicals sector is expected to be better than Oil & Gas, but it will still show lower asset utilization due to lower demand and lower margins on sales. Other sectors with below average asset utilization are expected to be other Oil & Gas sector, Oil & Gas equipment and related sectors, construction, pharmaceuticals (due to expected output loss as it is based on overall manufacturing sector output loss), and other sectors.

Did You Know? Saudi Arabia is expected to enjoy the highest credit growth at 5.3% in 2020 - Learn more 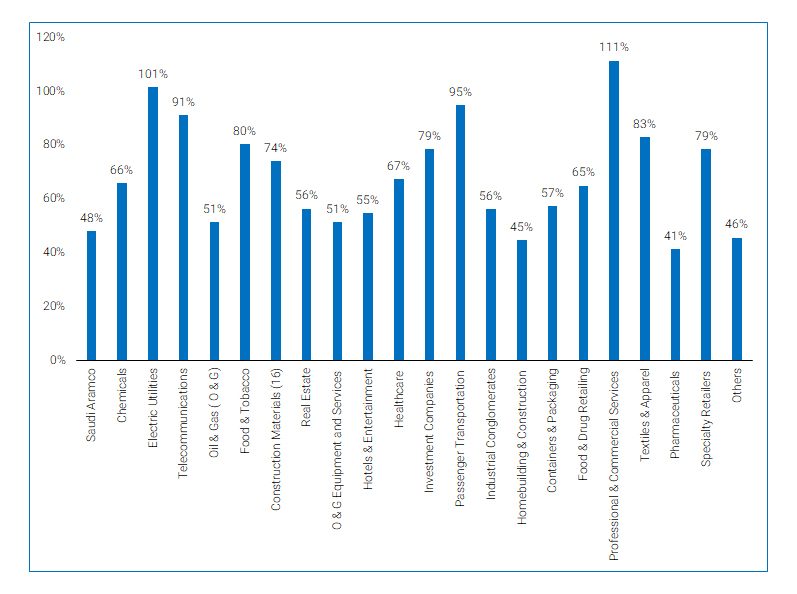 The underutilization of fixed assets by Saudi Listed companies in 2020CY is expected to impact the capital expenditure outlays for 2020CY as well as that for 2021. It is expected that despite the better economic prospects for 2021 with hopefully no second wave resulting in additional lockdowns and recovery of economic output, the need for higher fixed assets can be expected to arise in 2021. However, the lower profits in 2020CY is expected to constrain companies from taking up large capital expenditures in 2020CY despite the optimism of demand in 2021. No doubt, the overhang of lower utilization of assets added in 2019 but not utilized in 2020 due to COVID-19 will also deter fixed asset additions in 2020. Some companies that are not fully leveraged can borrow to invest if 2021 prospects brighten. Others facing borrowing constraints and lower cash generation might have to reduce capital expenditures unless they raise equity to meet the shortfall. However,overall, not all companies will be able to invest in fixed assets comparable to that done in 2019. Therefore, the lower capital expenditure programs in 2020 can be expected to impact companies from capitalizing fully any demand upsurge in 2021 due to pent up demand consequent to the COVID-19 caused demand disruption in 2020. Which are the companies that will benefit consequently, and which are the ones that must yield to loosing market shares locally or internationally is the moot question.