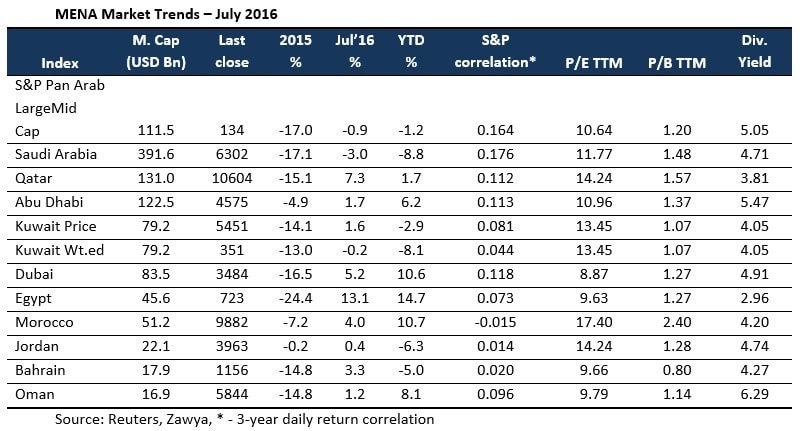 Blue chips drove Qatar’s index surge, with real estate (8.52%), telecoms (7.94%) and banking stocks (7.1%) performing well in July. The recently announced Qatar’s fuel subsidy reform will also help shrink its budget deficit by reducing expenditures; a move that will help investments in private sector. Saudi index fell due to fall in oil price, and the continued resilience of shale oil, as increasingly efficient US shale production continues to drive a wedge in OPEC’s strategy of flooding the market with excess crude.

Blue Chips had a mixed July, with Emaar Properties (UAE) and Ezdan Holdings (Qatar) ending the month at the top, gaining 10% and 9.6%, respectively. National Commercial Bank (Saudi Arabia) and First Gulf Bank (UAE) witnessed a slump, losing 6.0% and 4.4%, respectively. Positive Q2 results contributed to improved market performance for most companies in the region, as investors returned to the markets post Ramadan. Dubai's Emaar Properties reported a 8% rise in Q2 net profit, as strong investor demand led to higher revenue recognition. Ezdan Holdings half-yearly profit went up 8%, driven by rise in operations. Despite posting a profit of 3.2% in Q2, shares of National Commercial Bank declined the most in July, as the bank proposed a lower dividend for the first half of the year, as compared to the previous year. Q2 profits of First Gulf Bank slipped 10%, meeting analyst estimates, while the merger between FGB and National Bank of Abu Dhabi was confirmed early in July.

Rise in Debt issuance
According to IIF, GCC countries are turning to both domestic and foreign debt markets to finance their rising fiscal deficits, and this trend is likely to persist in the short to medium term. Since mid-2014, the drop in oil prices has shifted the large aggregate current account surpluses of GCC countries, accumulated in the past decade, to a deficit of USD 35bn in 2015, and this is expected to widen to USD 89bn or 6.5% of the GDP in 2016. The large resident capital outflows in the form of investments, which peaked at USD 384bn in 2013, have virtually disappeared, and international reserves are being used to fund widening deficits.

Prior to 2016, GCC sovereign debt issuance had been relatively sparse, barring Bahrain, particularly in foreign currency, and usually reserved for benchmarking or for monetary policy purposes. Thus far, in 2016, both Abu Dhabi and Qatar have tapped international markets with sizeable issues.

Fall in Real Estate transactions
Saudi Arabia has registered a sharp drop of 56.7% in the total weekly sales, settling at USD 0.5bn, the lowest weekly level in a decade. Experts claim this drop in sales was caused by the low demand that followed the implementation of the so-called white land fees regulation, which pushed people who want to buy properties to wait for a real decline in prices.

Oil Market Review
Brent crude fell sharply by 14.5% in the month of July, closing at USD 42.46 per barrel; the lowest close in 4months. Oil output from the Middle East rose to a record high in June, with production rising above 31mn barrels per day for the third month running. Supply from the Organization of the Petroleum Exporting Countries has risen to 33.41 million barrels per day (bpd) in July from a revised 33.31 million bpd in June, adding downward pressure on prices.