Effect of lower oil prices and their impact on non-oil sectors was evident in the earnings performance of H2, 2016. Key sectors such as banking, telecom, real estate and construction all witnessed a fall in earnings. Banking and Telecom sector’s earnings declined by 7% and 29% during H2 2016 on a YoY basis. Poor performance of the former was due to tight credit and weak economic conditions, while the latter suffered from subdued performance of foreign subsidiaries, increased regulatory costs and network operating costs. Financial services (Earnings H2 2016 – USD 2.1Bn) performed well posting 23% growth in earnings during H2 2016 and an overall increase of 11% for the whole year 2016. Recovery of oil prices in the second half of the year helped Commodities (Earnings H2 2016 – USD 3.8Bn) sector to recover and post 19% growth in H2, 2016 earnings compared with same period in earlier year. For the whole year the commodities sector’s earnings increased by 1%. 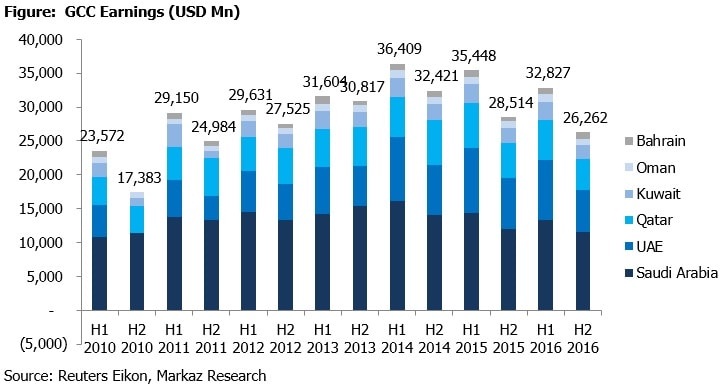 Saudi Arabia
Saudi Arabia witnessed a decline of 4% in net earnings in H2 2016, compared with the same period a year back. Saudi Banks witnessed a 21% decline in earnings during H2 2016 as a result of bad loans, lower government spending and a host of other charges. Commodities sector was the star performer among the Saudi sector with earnings growth of 31% during H2 2016 following the rebound in oil prices post OPEC deal. Non-oil sectors such as financial services and real estate posted healthy growth in H2, 2016 as their earnings grew by 19% and 82%, respectively.

Qatar
Qatar’s banking sector witnessed a 4% decline in earnings owing to tight liquidity and market conditions. Qatar’s real estate sector rebounded in H2 2016 with its overall earnings growing by 167% during the period. Barwa real estate (H2 Earnings – USD 111Mn) suffered a loss during H2 2015 compared to the profits witnessed in H2 2016 while United Development witnessed a 22% increase in net profits.

Oman
Corporate earnings in Oman declined by 18% in H2 2016 led by poor performance in the banking and telecommunications sector which declined by 8% and 33% respectively. Oman’s commodities sector posted a net loss of USD 56Mn H2 2016 compared to USD 9Mn loss witnessed in H2 2015. Oman’s banking sector, which has the highest impact on overall earnings declined by 8% on the back of sluggish performance of major banks including – Bank Muscat, Bank Dhofar and National Bank of Oman.

Bahrain
Bahrain’s corporate profits posted a growth of 58% largely on account of low base effect. Banking, Commodities, Financial services witnessed positive performance during H2 2016. Construction sector posted a net loss while Conglomerates declined by 59% during H2 2016. Aluminum Bahrain witnessed a turnaround in the H2 2016 earnings as it posted USD 74Mn compared to the loss of USD 19 Mn in H2 2015. 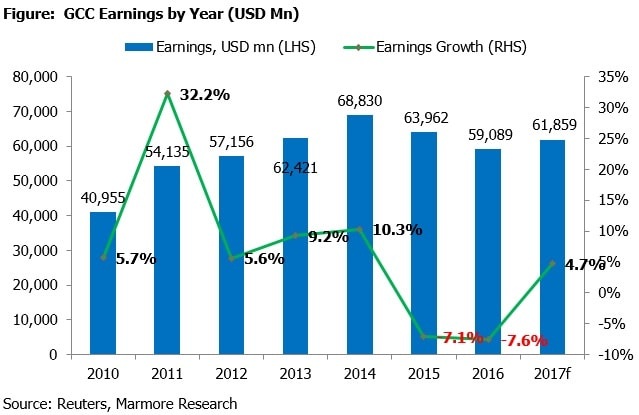 We expect GCC corporate earnings to expand by 4.7% in 2017 over 2016 and reach USD 63.3Bn by the end of the year. Overall, we expect earnings growth for Kuwait, UAE and Saudi Arabia to be 8.3%, 5.8% and 4.6% respectively. Kuwait’s strong banking position is expected to be positively helped by better credit growth and governments infrastructure push. Saudi Arabia, one of the largest oil producers, is expected to benefit from the positive momentum in oil prices.