According to our recently released Monthly Market Review for the month of September, GCC equity markets remained flat despite the surge in crude oil prices witnessed during the month. Kuwait stock market, however, hogged the limelight as the first part of its integration into the FTSE EM index was effected on September 24th. Consequently, a spike in liquidity was witnessed on September 20th, as the rebalancing was done using the closing prices of 20th September.

Kuwait stock market was flat during the month and is just about holding on to its yearly gain of 8.8%. Kuwait’s All Share Index, despite its inclusion into the FTSE Emerging Market index fell by 0.1% during the month as the effect of FTSE inclusion was already factored in by investors during the build-up. Among Kuwait’s blue chip companies, Boubyan Bank was the biggest gainer, up by 6.8% during the month while Zain underperformed, with its share price reducing by 0.2%.

The S&P GCC index was up 0.2% for the month, increasing the overall gains for the year to 9.8%. The rebound in Saudi and Dubai markets at the end of the month helped the S&P GCC index close on a positive note for September. Oman and Saudi Arabia’s indices were the best performers of the month rising by 2.8% and 0.65%, respectively. Abu Dhabi was the worst performer, falling by 1.0%. The downgrade in credit ratings of two Dubai based state owned companies by S&P Global in addition to the sluggish real estate sector weighed on Dubai’s equity markets widening its losses before staging a recovery at the end of the month. However, it remains the worst performer so far year to date (YTD), slipping by 15.9%. Qatar remained the best performing GCC equity market in 2018 YTD, despite seeing its General Index falling by 0.7% during September.

Abu Dhabi Commercial Bank (ADCB) and Boubyan Bank were the top performers among GCC blue chip companies, rising by 12.8% and 6.8% during the month respectively. The announcement regarding a three-way merger involving ADCB to form the fifth largest bank in the GCC enthused investor sentiments, causing the bank’s stock to rise and stand out among UAE blue chip companies which posted negative returns for the month of September. Saudi-based utility company Saudi Electric was the worst performer among blue chip companies, with its stock falling by 11.3% during the month, extending its YTD losses to 23.9%.

Global headwinds
The U.S economy is on a strong footing, while many economies globally are having a hard time. The collision of Emerging Markets (EM) and Europe with the American wave of tariffs and policy changes are hurting their growth prospects. A trade war is currently in the making with no sign of backing off from both the China and the U.S, the two largest economies in the world. If the tension escalates and erupts into a full on trade war, there would be no winner and every market could take a hit.

MSCI EM index continued to remain under selling pressure as investor appetite for EM stocks failed to see a trend reversal. MSCI EM index closed 0.8% down. On the other hand, MSCI World index ended the month on a positive note, registering 0.4% gain for the month. Additionally, the financial inadequacies of EM economics largely masked by the global liquidity are starting to appear as the liquidity recedes, following global monetary tightening. EM currencies continue to lose value against the U.S dollar with the currencies of Turkey and Argentina (Turkish Lira YTD -37.4% & Argentine Peso YTD -54.9%) suffering the most. 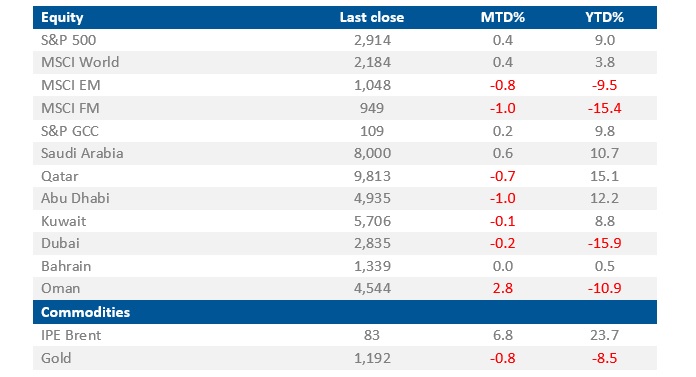 Oil Market Review
Oil markets prolonged their bull run during September in the wake of the U.S. sanctions against Iran, which is expected to put pressure on global oil supply. Brent crude prices surged by 6.9% during the month, closing at USD 82.7 per barrel and gaining  23.7% YTD. OPEC’s production cuts, supply disruptions in Iran, Venezuela and Libya in addition to the rise in global oil demand have contributed to the rebound of oil prices in 2018. In an attempt the keep the prices down, the U.S. president urged oil producing nations during the month to boost their production. However, OPEC leader Saudi Arabia and non-OPEC member Russia ruled out any immediate action while stating that they are prepared to address any potential shortage in output from Iran. 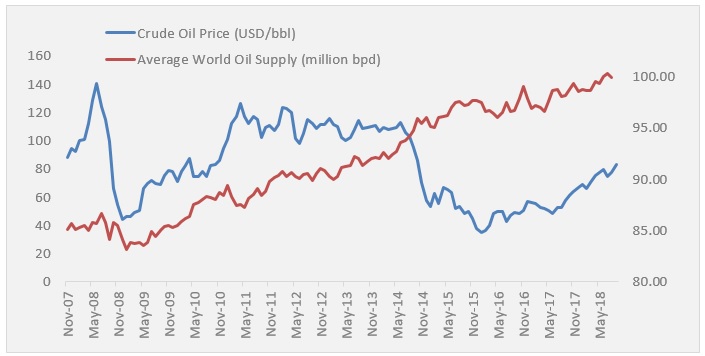 Despite the ongoing trade tensions between the U.S. and China that could cause oil demand to shrink, the outlook for oil prices remain positive primarily due to supply shock expectations. J.P. Morgan in its latest oil market outlook has stated that a spike in prices to USD 90 per barrel is likely in the coming months due to the Iran sanctions. China’s Unipec recently projected the global oil demand to peak at 104.4 million bpd in 2035, up from the current 100 million bpd while also stating that prices between USD 60 and USD 80 per barrel would be normal given the supply and demand dynamics. However, the increase in oil price is putting pressure on consumers in major EMs such as India that imports the vast majority of its crude oil demand.