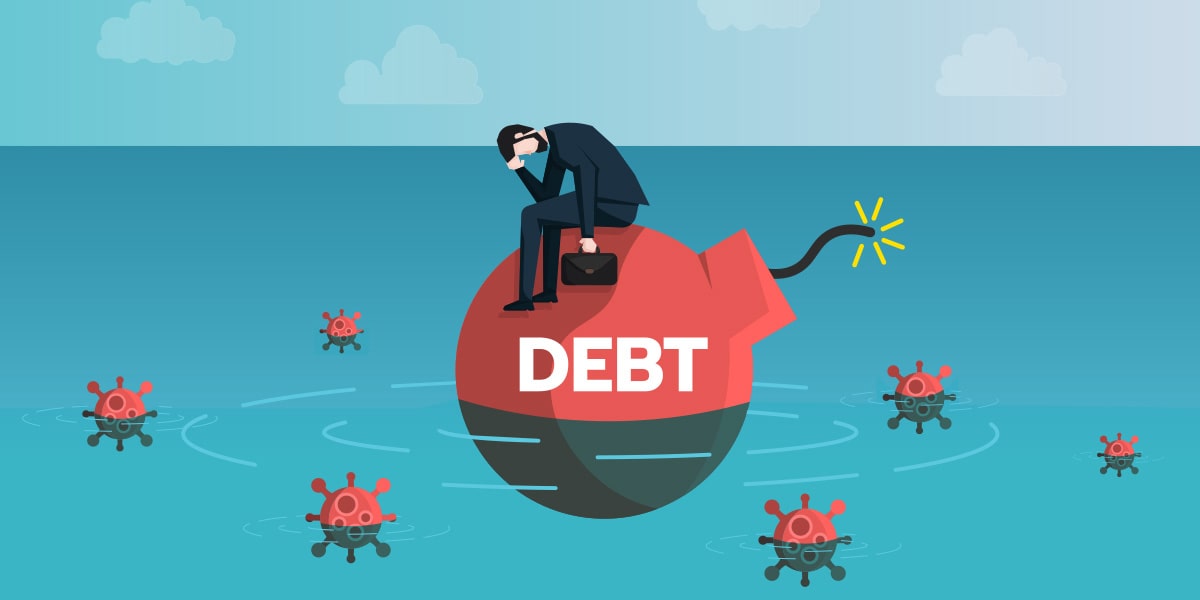 The economic repercussions of the impact of novel Coronavirus and the subsequent breakdown of OPEC+ supply cut agreement is unprecedented for the gulf economies. The sudden freeze in economic activity due to various measures such as travel restrictions (curbs on flights, public transportations and taxis), closing of schools, universities, shopping malls, commercials establishments, and curfew imposition to prevent the spread of virus has created a demand shock. Transportation sector that accounts for approx. 50 percent of global oil demand by end-use category has been impacted by such measures that have been implemented in various degrees across countries. Subsequently, oil markets faced with excess supply, and reduced demand has tumbled to historic low price levels.

As a result, the outlook for GCC economies that majorly rely on petrodollars has deteriorated at a rapid pace. IMF in its latest report has reduced the overall growth expectations for the GCC region by 520 basis points; it now expects the economy to contract by 2.7 percent from an earlier value of 2.5 percent growth for 2020. To assuage the economic impact, the extent of which is currently unknown, GCC countries have unveiled various fiscal and monetary measures. The fiscal measures presently amount to approx. USD 60 billion.

Table: GCC economies are staring at economic recession due to lower oil prices and COVID-19 impact

On expectations of lower fiscal revenues, GCC governments has revised their budgets, cut down on non-essential spending and scaled back capital expenditures in various degrees. Saudi Arabia has stated that it would reduce spending by SAR 50 billion (USD 13.3 billion or 2 percent of its GDP) in non-priority areas of 2020 budget. Dubai government is set to reduce capital spending by atleast 50 percent. While, Qatar is set to postpone awarding of USD 8.2 billion worth of project contracts on account of coronavirus outbreak. Similarly, Bahrain has announced that it would reduce non-priority government agencies expenditure by 30 percent, Oman authorities have announced that they will reduce their spending by 10 percent in 2020 (5 percent of GDP) and halt new capital outlays (Bloomberg).

Figure: Fiscal deficit is set to widen on back of lower oil receipts 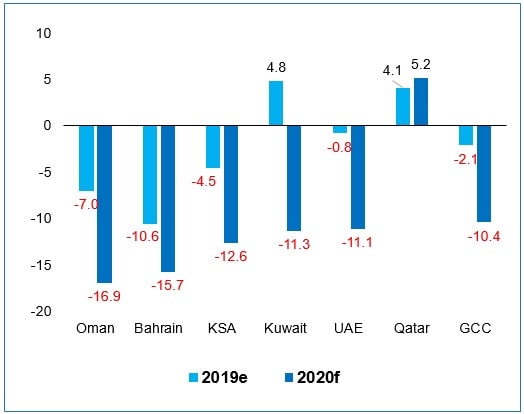 To balance the deficits, the governments could either dip into their accumulated fiscal reserves or issue additional debt. As the interest rates are at record lows and with many GCC countries having low debt compared to their emerging market peers, it would be a prudent choice to tap international debt markets for capital. Whilst, Kuwait, UAE, KSA and Qatar command robust reserves and have low debt, could tide over the situation easily; Bahrain and Oman that do not have robust reserves similar to their GCC counterparts could witness pressure in consolidating their finances.

Figure: Debt levels of GCC countries are set to accelerate at record pace 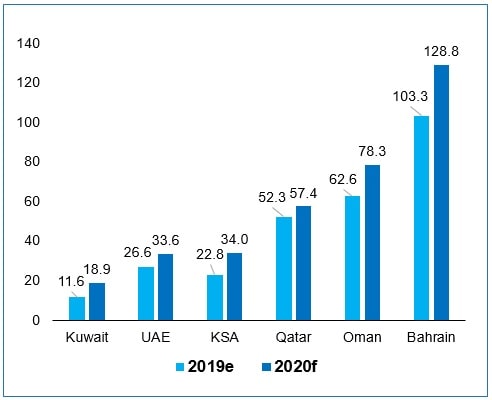 Fitch ratings agency recently noted that the ability of Oman to issue additional debt is constrained and that it could come at a high cost. Fitch recently downgraded Oman to ‘BB’ from ‘BB+’ with a negative outlook that could push Oman further deep into the ‘junk’ territory. The report added, the financial position of Oman is precarious and that it could threaten its ability to maintain the currency peg.

Though Bahrain has higher debt level than Oman, GCC countries have pledged USD 10 billion of financial support to help it tide over the situation.

In the start of April, Qatar issued USD 10 billion of debt in three tranches of five, ten and thirty years period. Due to its financial profile, it was able to receive orders worth up to USD 45 billion; however, the pricing was 40 basis points (bps) over its existing curve. Abu Dhabi – prime credit in the region, followed up with USD 7 billion of bonds in three tranches and it was able to garner orders for USD 44 billion at a pricing of 30bps over its existing curve.

In the case of Kuwait, parliamentary authorization to issue or refinance debt expired in 2017. The government has not been able to secure approval for borrowing yet. Reserves in Future Generation Fund (FGF) that stand at approx. USD 468 billion (or 346 percent of 2019e GDP) cannot be used for funding without approval while General Reserve Fund (GRF) whose assets amount to USD 77 billion (57 percent of 2019e GDP) and are utilized to meet the financing needs of the government are depleting.

We expect GCC sovereigns to issue debt worth USD 67 billion in 2020 compared to USD 52.9 billion last year. However, last year USD 37.4 billion was raised in international debt market and the rest was issued domestically. For 2020, we expect the majority of issuances to be in international debt markets. This would be accompanied by USD 84 billion in drawdown from their reserves to cover the deficits in 2020 compared to drawdown of USD 15 billion last year (Fitch Ratings). Thus, the financing mix is expected to decisively shift towards reserve drawdown from debt issuance to cover the deficits.