GCC Markets - Who created value in the medium/long-term?

The main goal of an investor or a money manager is to create wealth – be it through capital appreciation strategy, dividend strategy or a capital preservation strategy. Unfortunately over the last 10 year period (2005-October 2015) all but Muscat stock exchange failed to create wealth for investors . That said, looking at the 5 year data, UAE and Qatar posted remarkable returns compared to its peers. Dubai and Abu Dhabi posted 16% and 11% five year CAGR respectively while Qatar posted 9% during the same period the main catalyst for Qatar and the UAE was the inclusion of their respective markets in MSCI EM Index. Assuming investors picked a passive strategy, they would have failed to create wealth over the 10 year period (except Oman) and the 5 year period (barring UAE and Qatar).

While at a macro level markets did not create value, at a stock level we have many winners and losers. After dissecting the stock universe based on size (large, mid and small), we applied liquidity filter (to weed out illiquid companies) to see how they stack up. Here are the results of GCC value creators.

We identified 30 large cap companies for our 10 year analysis and 40 companies for our 5 year analysis dominated mostly by banks followed by Telecom. Over the past 10 years, large caps yielded a CAGR of -4% (the range was between +14% and -10%). The range was more pronounced in the 5 year period, during which GCC large caps posted returns ranging between +34% to -23%. However on an average, GCC large cap companies posted +7% (5 year CAGR).

Banks dominated over the 5 and 10 year period

Source: Reuters and Marmore, the chart shows the dominance of each sector, measured by the total number of companies in our study

The ranges of returns were the highest among the 3 classifications (large, mid and small cap). In the 5 year CAGR timeline, GCC small caps posted a high of 41% and a low of -39%. When pulling the data further to 10 years, the range of return was quite similar +44% to -36%. 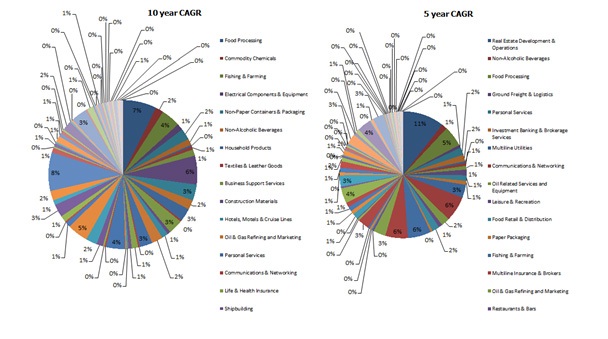 Source: Reuters, Marmore the chart shows the dominance of each sector, measured by the total number of companies in our study

All in all, GCC market performance over the past decade was negative. Over the past 5 years, only large and medium cap companies created value (based on our liquidity criteria). Moreover, banks clearly dominated the pool of sectors. That said investors should evaluate their investment strategy annually and make appropriate changes to avoid capital loss. Our experiment shows that simply being a long term dormant investor does not work as everything changes with time and so should our investment strategy and outlook. Passive investors who invested in 2005 have no edge over people who invested in 2010 or few years ago.