The main source of current GCC feedstock is ethane which, along with methane, is naturally found in associated gas. Other significant feedstocks includes propane and butane, both of which are derived from LPG. Lastly, there is naphtha, which is a product of crude oil refining. In contrast it is important to highlight that Naphtha’s contribution in Global feedstock consumption is around 70% in the year 2015, according to Platts. 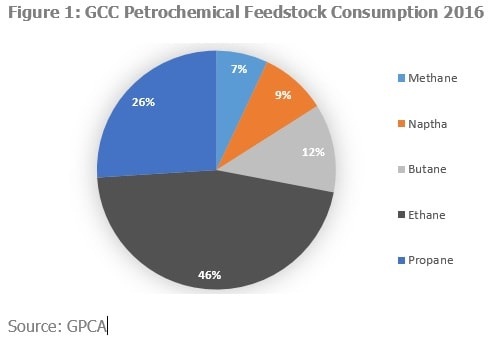 GCC has a significant cost advantage in feedstocks as compared to US and Europe wherein Ethane and Naphtha are the major feedstocks used to produce petrochemicals. Ethylene is the most produced and consumed petrochemicals globally. Cheap availability of Ethane also provides high margin when compared with the price of Ethylene.

Ethylene and its derivatives are the most widely used products in the global chemical industry. GCC petrochemicals mainly use ethane to produce ethylene, whereas other regions, such as Europe and Asia, rely on crude-oil derived naphtha. The generally lower cost of ethane versus crude oil has lent a historical cost advantage to GCC particularly during the period of elevated oil prices. 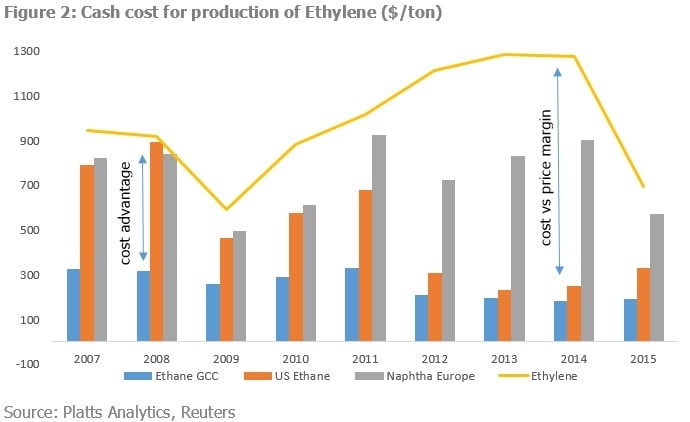 Petrochemical producers in the GCC are currently at the juncture where several trends could significantly affect their industry. Multiple market disruptions—including the shale gas discovery in the United States, low oil prices worldwide, and a capacity expansion drive in China and Iran are reshaping the petrochemical industry. These disruptions are shifting the balance of power among major regional players and expose many Middle Eastern producers to the risk of losing competitive edge which they have long enjoyed from cheap feedstock. In addition, GCC is also experiencing a regional shortage of natural gas, due to supply–demand imbalances.

Regardless of their negligible impact in the short term, these new feedstock sources in US, China, and Iraq can present threats to the profitability of GCC players in the long run. The shifts in the cost curve could lead to more competitively priced feedstocks and new petrochemical capacity in all three markets: the U.S., China, and Iraq. Capacity additions from these sources could ultimately result in excess supply, and new feedstocks will likely replace older sources pushing traditional players out of the market. At a time when gas prices within the GCC are likely to rise, GCC will have to explore alternative growth strategies to conventional cheap feedstock in order to remain globally competitive.

In order to ensure growth of the petrochemical sector, as it faces an ethane supply crunch, other feedstocks are required to be increasingly brought into the mix, the most prominent being naphtha. Although more costly than ethane, when naphtha is processed (cracked) it yields both olefins and aromatics (both are basic chemicals which are used to produce other more refined chemical products), whereas ethane yields mainly the former. Naphtha crackers are more efficient and the output produced is of higher quality. Although the higher cost of cracking naphtha vis-à-vis ethane had discouraged its use previously, with an ethane shortage looming, naphtha’s use has become increasingly viable. As a result of the higher use of naphtha, the GCC will see total aromatics output rising by 2020. This new value chain of chemical products will open up a downstream manufacturing and conversion industry.

Alternatively, GCC producers can opt for joint ventures to set up projects in the U.S., China, and Iraq. They can also expand into performance or specialty products, or consolidate the industry and build scale. Each of these options entails building on existing capabilities—or implementing capabilities that are new to the enterprise. Industry leaders in the Middle East are of the opinion that integration with refineries and downstream consumers has become increasingly crucial not only for establishing a higher value adding manufacturing base, but also for pushing the GCC’s non-oil exports.

1 – The margins mentioned are only for the petchem segment (QAPCO)
2 – The margins for Dow Chemicals has suddenly increased in 2015 due to investment income, while it declined significantly in 2016 due to unusual expenses