According to our recently released Monthly Market Review for the month of February, GCC equity market pulled back where S&P GCC index retreated back by 1%, after a fabulous January when it zoomed by nearly 7%. At country level, some continued their upward trajectory (UAE, Bahrain and Kuwait) while others (KSA, Qatar and Oman) pulled back from their earlier rally. Globally, equities continued the bullish rally in February as indicated by MSCI World index that increased by 2.8%, extending YTD gains to 10.7%. U.S market also continued its rally as concerns surrounding trade war eased. China‘s Shanghai A-Share index became the leading gainer as conducive policy environment, easing concerns pertaining to trade war and  improving sentiments resulted in increased inflows. Emerging markets also continued the strong momentum during the month, retracing back by more than half from the decline in 2018.

Kuwait’s market continued its steady start for the year in February. Oil and Gas sector was the key contributor rising by 5.9% during the month. Among the blue chips, Agility emerged to be the best performer in Kuwait, gaining 6.1% during the month. Boubyan Bank on the other hand wiped out its gain in previous month as it declined by 5.9% during February. The bank received the approval from CMA to raise capital by 15.75% by issuing shares. National Bank of Kuwait on the other hand extended YTD returns to 4.8% and continue to benefit from restrictions on foreign ownership cap of 49% on domestic banks being lifted.

Dubai index’s strong performance was driven by growth in earnings by banking sector. This is in stark contrast to a forgettable year of 2018 when the Dubai index declined by nearly one fourth. Among blue chip companies, First Abu Dhabi bank went up by 7.8% YTD post registering yoy growth of 32% in net income. Emirates NBD also registered a growth of 20% in net profits pushing the stock price up by 6.9% YTD. Qatar on the other hand had a remarkable year in 2018 but it lost the momentum in 2019 and was the top declining market among GCC nations in the month of February. Ezdan Holding was the worst performer, declining by 16.8% among the blue chip companies. The heavyweight, Qatar National Bank that has a market cap of over 36% of the total market cap in the country also declined by 4.9%.

Saudi Arabia index cooled off in February, after outperforming its GCC peers and the Emerging market index during previous month. Saudi Arabia is in the process of introducing regulation to allow companies from other Gulf countries to list on its stock market. Nasdaq Dubai also launched futures trading based on FTSE Russell’s Saudi Arabia equity indexes that tracks a group of 46 Saudi Arabian companies.

Across the globe, easing of U.S. China trade concerns and the prospect of reaching a trade deal buoyed the equity performance. In the FOMC meeting, U.S. Fed reiterated its stand to keep the interest rates on hold, which added further impetus to the rally. As a result, U.S. S&P 500 index extended its gain for the year to 11.1%. Trump also indicated towards extension of deadline of increasing tariffs on Chinese goods, citing significant progress across various key topics.

China market dominated the equity indices across the globe delivering spectacular returns to investors. Optimism surrounding trade relationship with U.S and stable yuan contributed to the positive sentiments. Average daily foreign inflows to China’s Shanghai A share index reached a record high of over CNY 4bn (Chinese yuan) during the month of February with market surging by 13.8%. ChiNext, an independent market that offers platform for tech heavy and innovative enterprises registered its best month till date, surging by 25.1%.

Oil markets continued the strong rally for the second month in a row after a subdued performance in last quarter of 2018. Oil prices rose by 6.7% during the month. Oil price movement remains volatile however the production cuts led by Saudi Arabia and the falling exports from Venezuela pushed the price upwards as rise in production elsewhere fell short of balancing the market. Goldman Sachs predicts Brent crude oil price to touch $70-$75 price range during the year as the market is expected to further tighten in the coming months. The year-end targets are however at $60 per barrel. 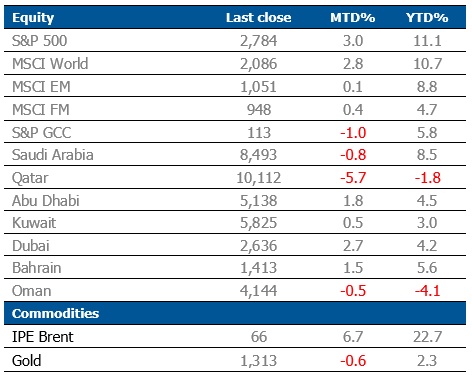