How much more can KSA cut production

Saudi Arabia plans to pump about 9.77mbpd in November, which would be its lowest output since January 2015. According to the Saudi energy ministry, the decrease in allocations for November includes a full 290,000-bpd reduction over and above the 486,000 bpd that Saudi Arabia pledged to cut as part of its commitment.

Considering Saudi Arabia’s commitment to do whatever it takes to end the oil glut, it is pertinent to understand how far Saudi Arabia can actually go to cut its output. Some of the prominent factors that would influence Saudi Arabia’s production cuts are its market share, global demand for oil and most importantly Aramco’s valuation.

Market Share
One bright spot for Saudi Arabia as an outcome of its initial decision of not cutting the production, is that it gained market share by 1% over the last two years. However, with the OPEC proposal to freeze or cut production, the gain receded to some extent. Saudi Arabia’s exports declined from 7.4 mbpd during October-2016 to 6.7 mbpd during September-2017.

Considering that Saudi Arabia’s supply is still in excess compared to that at the end of 2014, it appears there is still some room to cut output albeit at the cost of losing market share by a few more basis points. 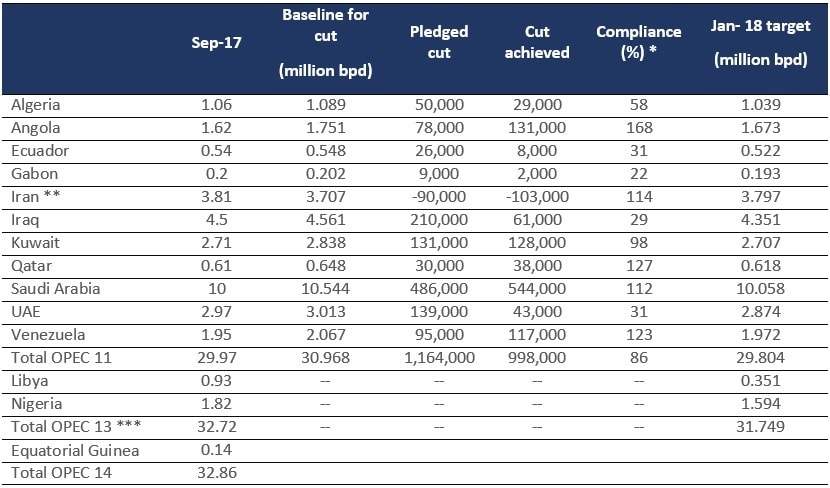 Global Demand
The oil price woe started with the shrinking gap between demand and supply and eventually leading to the current scenario of excess supply. Consumption was affected due to slowdown in the phase of growth in demand for oil globally and in particular China- the second largest oil buyer. This led to increased gap between supply and demand.  The demand of crude is beyond the vicinity of control for the crude suppliers and hence they can only rely on the supply to influence the price. Excess supply at a lower price is not likely to result in increased consumption, though the oil importers might use this opportunity to stockpile crude. However, considering the long-term storage costs, the increase in the level of consumption is going to be limited unless real demand kicks in.

Saudi which relies heavily on the oil revenue, is better off with higher oil price. Despite increased production levels, Saudi will not be able to push the required additional barrels of oil to compensate for the loss of revenue due to the lower oil price. For instance, Saudi would have to increase the exports volume by 1.5X @ USD 65 per barrel and 2X @ USD 50 per barrel to match export revenue of oil price @ USD 100 per barrel. Now that the gap between supply and demand appears to be diminishing, Saudi would it’s supply cut to further reduce this gap. However, Saudi will also ensure through its dominance in OPEC that all the members to contribute to plug this gap.

Aramco Valuation
The significance of oil prices on the Aramco IPO cannot be emphasized enough. Higher price of oil would help the Aramco report stronger realized sales in the financial performance details that it must release ahead of the IPO. According to Sanford C. Bernstein estimates, Aramco would make a net profit of USD 13.3 a barrel on its upstream production with oil @ USD 50, on the contrary its profit would increase to USD 16.90 with oil @ USD 60. This suggested that a USD 10 swing in the oil price could effectively translate into hundreds of millions of dollars to Aramco’s IPO valuation. Considering the coveted USD 2 trillion valuation of Aramco that the Saudi Government is aiming towards, marginal receding of market share is relatively a smaller sacrifice.

Conclusion
The Saudi Arabia-led OPEC initiative to control the oil prices have started to yield result with the global oil market improving and stabilizing. The oil price has recovered considerably and global oversupply has nearly halved since the beginning of the year. Saudi Arabia would aim to keep the oil prices around USD 60 per barrel by cutting production, for now as this would help Saudi Arabia maneuver its economy comfortably and at the same time not offer much incentive to US shale producers to increase output drastically.
For Saudi Arabia it may appear that oil price recovery has come at a cost of giving up market share. However, it has two very strong reasons – reducing budget deficit and highest possible valuation for the Aramco, to stick to the cuts. Considering these priorities, historic production and market share levels of Saudi Arabia and global oil demand in the near future, it can be argued that Saudi Arabia production levels haven’t reach the maximum floor levels. We believe that Saudi Arabia wouldn’t hesitate to cut its production by another half a million barrels to achieve its target price.