The expats in the GCC region collectively remitted USD 105bn in 2015, increasing at a CAGR of 15% from USD 53bn at the end of 2010. Saudi, UAE and Kuwait have accounted for more than 80% of the outflow during 2010-2015.  Saudi Arabia, with leading outward remittance among the GCC, countries is also consistently ranked second globally after the USA. The robust oil prices and vibrant economic activity in Saudi Arabia led to a surge in urban development, which in turn, increased demand for foreign labor during the 2010-2013 period. Between 2010 and 2013, the remittances from Saudi Arabia grew at a CAGR of 14%. With the drop in the oil prices since-mid 2014, the staggering growth of remittance subdued to a CAGR of 3% between 2013 and 2015. Marmore estimates a 2% drop in 2016 resulting in outward remittances of USD 41.3bn compared to USD 42.3bn in 2015. 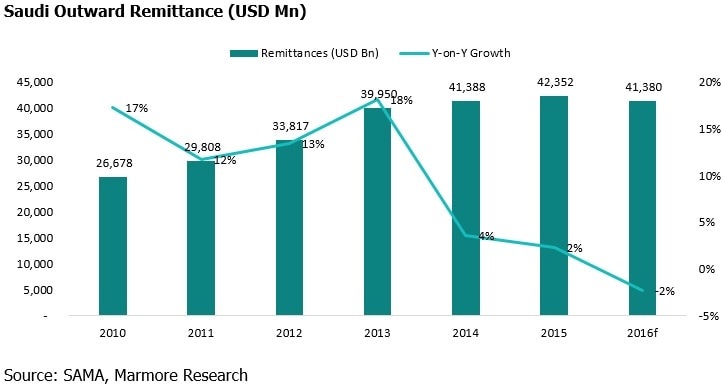 Oil Price, Investments & Remittance
The decline in oil prices has impacted the Saudi economy. According to IMF estimates, the real GDP growth of Saudi is projected at 1.2% during 2016, down from 3.5% in 2015. Lower oil revenues are forecasted to culminate into current and fiscal deficits at approximately 9% and 14% of GDP, respectively, in 2016.  Saudi ran a fiscal deficit of USD 97.9bn in 2015 and the deficit for the year 2016 is expected at USD 83bn by IMF. Since the decline of oil prices (mid-2014), the accumulated financial reserves (estimated at USD 608bn at end-2015) served as cushion for Saudi Arabia to manage the deficits. However, with the banks investing in Government debts instruments coupled with Government’s increasing deposits withdrawal, credit available by banks to lend to other sections of the economy such as businesses and retail took a hit. This tightening of liquidity and rise in interbank interest rates, which exerted pressure on credit growth took a hit private sector growth.

Saudi Arabia is also forced to cut investment spending by almost two thirds as it wrestles with the oil price rout. Fund allocation for projects, such as the Riyadh Metro and Jeddah’s King Abdulaziz International Airport, fell to USD 6bn in 2016, down from USD 17bn in 2015. According to press reports, spending on transport and infrastructure is expected to fall by 63% in 2016, as the kingdom axes capital expenditures in a bid to trim deficit. Saudi Arabia is spending USD 9bn a month from its foreign reserves which is almost 1.5 times the reserves spent during 2008-2009 to sustain the budget deficit. This has also constrained the country’s public spending capacity drastically, and as a consequence, Saudi Arabia is reviewing thousands of projects valued at about USD 69bn and weighing plans to cancel more than USD 20bn of projects and slash ministry budgets by a quarter to fix squeezed finances. The construction sector which employs a vast majority of the expatriate population would be hit hard by the cancellation of the projects. The capital investments increased by 4% in 2015 compared to 2014 and is expected to decrease by 10% in 2016 by IMF.

As per IMF’s estimates, the oil price is expected to continue to remain in the mid USD 50 range over the next two years. Despite the economic diversification efforts, embarked on by Saudi, the GDP growth is expected to be constrained in the forthcoming years.  The constrained economic activity would substantially reduce the demand for the expatriate labor force in the country. Investment spending is a key source of employment for both expats and locals. In the past, high levels of investment spending has resulted in the quick expansion and growth of expat population, especially male.