Is GCC a good place to hunt for yield?

Sizable issuances
The emergence of GCC bond markets have been a fallout of the low oil prices and decline in foreign reserves, which has forced the regional governments to look for alternative routes to fund their diversification plans. Recently, debt issuances has been an important avenue for fund raising activities of the government. Out of the USD 38.5Bn that has been raised in the Middle East region since the beginning of 2017, 61% has come from the GCC countries. Saudi Arabia has raised close to USD 9Bn in 2017, while Kuwait, Oman and Bahrain came out with bond issuances close to USD 8Bn, USD 7Bn and USD 1.6Bn respectively(CBonds). In 2016 alone, the GCC region raised close to USD 71Bn. Favourable financing conditions and significant investor demand encouraged a rebound in bond issuance throughout the MENA region, and particularly in GCC countries. This could be inferred from the fact that most of the government and commercial issuances from the region have been oversubscribed consistently. Oman’s recently issued USD 5Bn bond issuances was oversubscribed by almost four times (NBAD).

Rising investor interest
GCC region has found quite a bit of interest from the Asian investment community mainly owing to the low interest rate environment prevailing in the developed economies. This new sprouted interest for GCC issues from Asian investors has been due to the familiarity of GCC markets.  Asian investors have become better attuned to GCC credit and their institutional knowledge has grown considerably; roadshows conducted by GCC countries in major Asian financial hotspots like Hong Kong and Singapore have received brisk investor interest. The strengthening of US currency has also led lot of investors to choose dollar denominated bonds. Close to USD 9Bn of bonds issued in the USD dollar denomination were subscribed by Asian investors during 2016, twice the amount of funds that were placed in 2015 (The National).

High credit rating and better yields
GCC countries offering local currency issuances have also increased in the recent years; Korean won-denominated paper leads Asian currency sector lately, with a 43% share (USD 1.3 billion equivalent) of such paper issued since 2015. The offshore Chinese renminbi market is also a good indicator of the increasing interest for GCC companies to issue local currency bonds, currently equivalent to USD 796 million. The local currency issuances of GCC papers/ bonds grew by more than 25 percent in the year 2016. Year to date, it is seven times that of the same-period volumes last year.

GCC nations for their part offer better yields than other developing economies of similar credit rating. For example, Kuwait and Abu Dhabi’s ten-year sovereign bonds have Yield to Maturity (YTM) that is higher by 20 and 45 basis points respectively compared to South Korean government bonds (NBAD).  Similarly, Qatar’s ten-year bonds which is rated as AA- yields almost as much as China’s ten year bonds despite the fact that latter’s rating being one level below at A+. Attractive yields and relatively safe economies make it even more appealing from an investor point of view.  The GCC region currently offer a mix of credit ratings – Abu Dhabi and Kuwait have the highest AA rating while Qatar, Saudi Arabia, Dubai and Oman have ratings that range from AA- to BBB- providing investors with wide investment opportunity.

10 Year Sovereign Bonds – A Comparison of Yield to Maturity (YTM) 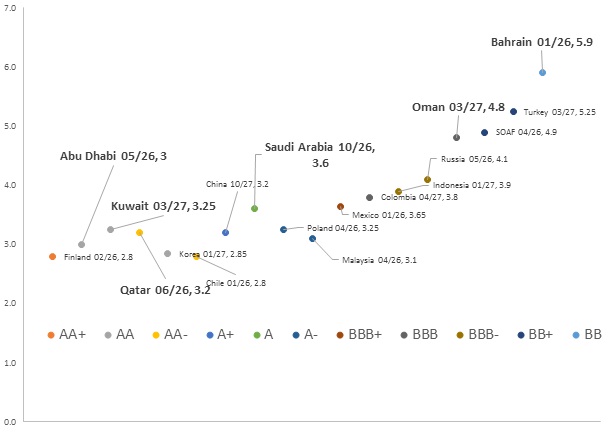 Outlook for bond issuances in the region
Funding requirement in the region by sovereigns and corporates is on the rise and bank liquidity is not enough to absorb the entire demand. Moreover, as the countries look for diversification of the economy there is impetus on growth. In addition to the sovereign issues, there is ample scope for private company issuances in the region that will offer higher yields. Spending by corporates on M&A and investment projects will grow and have a direct impact on fixed income issuances. From 2007 alone, there has been 225 corporate issues that has hit the GCC market with more than half of that (137 issues) coming up after 2013.  There has been 17 companies that have come up with bond issuances in 2017 double the number of companies that issued bonds in 2016.

GCC region has been trying to harmonize the regional banks’ capital requirements to be in line with BASEL – III. In 2016 alone the size of the bonds issued by banks in the region increased by 36% to USD 11.7Bn. This trend is expected to continue in the near future. One advantage that GCC banks have is that they have been relatively conservative in their business and operational strategy, as a result they have strong balance sheets which is expected to be positive for such issuances. Basel III implications for liquidity are fairly significant in GCC countries as banks have a substantial contractual maturity mismatch between medium-term lending and very short-term customer deposits. Some banks have started to issue longer-tenor debt to reduce this mismatch, but this remains limited (Fitch Ratings).

Still near zero interest rates have made investors (not only in Asia, but also in US and Europe, where interest rates are low) willing to increase their exposure to GCC sovereigns and banks. They are gradually becoming cognizant of the high quality papers available in the GCC region, and the interest is set to continue for good part of 2017. GCC nations have also reached out to investors in the Asian market by offering issuances in Asian bond markets. Formosa market in Taiwan is a notable example of quality bank issuances released abroad; QNB raised USD 625 Mn in 2016 and both NBAD (USD 1.5Bn) and ADCB (USD 230Mn) have followed suit this year. GCC banks have also tapped the international syndicated loan market to refinance maturing debt and are expected to continue to raise money throughout the year. In the current environment, GCC region remains the sole bright spot that promises to give higher yields with relative stability.