During the past decade, Saudi Arabia has witnessed rapid economic development, attributable to elevated oil production and prices, vigorous private sector activity and strong government spending on infrastructure, health, and education. The nominal GDP of KSA grew from USD 754.6bn in 2013 to USD 761.9bn in 2014, and is projected to reach USD 791.6bn in 2016. High population growth coupled with rise in per capita income has fuelled the demand for residential units in the Kingdom, especially in Riyadh and Jeddah. Government’s focus has shifted towards the housing shortage in the country, as a result of the increasing growth to the population.

Due to this, strong supply is expected from projects undertaken by the local government agencies. According to Marmore’s report on KSA Residential Real Estate, The Ministry of Housing is developing 15,000 units (handover in 2017) and 15,500 more units being planned. The Ministry of Housing is developing its first project in Riyadh, which includes 675 apartments and 2,200 land plots, which is expected to increase the supply of affordable housing, as a large proportion of the population still does not own a house in KSA. But, demand for residential real estate is expected to be relatively low due to the new mortgage policy, which has reduced the amount of loan permitted on a property. Increasing land prices, lack of construction finance and availability of land, constrain supply especially in affordable housing and middle-income housing segments. As a result a significant percentage of middle-income households choose to rent rather than purchase property. On the other hand, rising income levels and changing lifestyles has led to increase in supply of luxury high-rise residential units, with greater focus on “modern luxury”. But the combination of low interest rates and continued fiscal stimulus has raised concerns of potential asset bubbles, especially in the property markets, with the bank lending to real estate increasing by 31 per cent in 2014.

Value of construction contracts awarded in the first half of 2015 stood at USD 37bn, and despite lower oil price the contracts were awarded at a faster pace in 2015, compared to 2014. Residential real estate, roads, power and healthcare were the primary sectors accounting for close to two-thirds of the total awarded contracts, while Riyadh region captured the lion’s share of awarded contracts. Construction activity also seems to have peaked, with the demand for cement rising at double digits over the last five years.

The number of transactions continued to decline due to the new mortgage law, which limits the maximum loan amount to 70 per cent of the property value. Average price per sq m experienced quarterly decline in all three major cities; average price per sqm for land in Riyadh declined 27 per cent YoY, followed by decline of 25 per cent in Jeddah.

These declines accompany a decline in total number of transactions indicating that the sharp drop in recorded prices is not sustainable and are set to adjust after the bottleneck clears, which can only be fueled by liquidity, in the form of credit availability, and a rise in affordability. Only then will the market adjust to fair and long term sustainable values with less volatility.

Figure: Number and value of residential real estate transactions in Riyadh from July 2010 to 2015-YTD 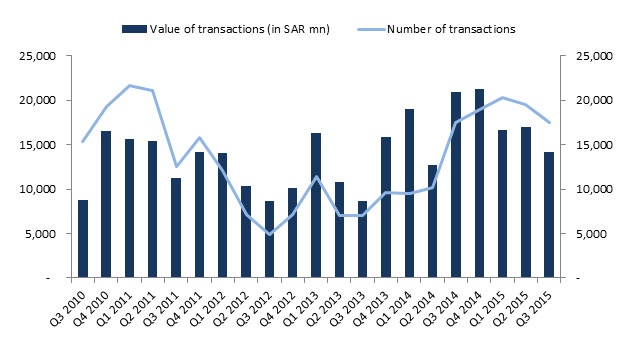 Figure: Number and value of residential real estate transactions in Makkah (Jeddah) from July 2010 to 2015-YTD 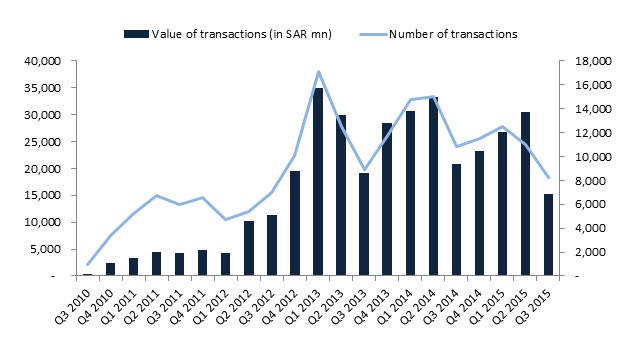