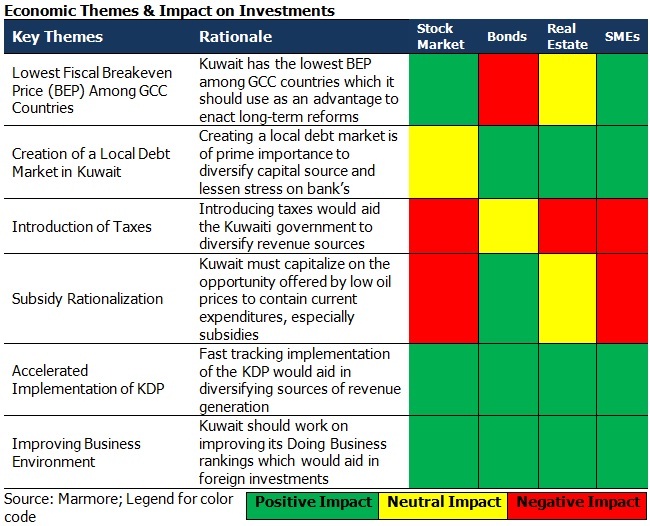 Acording to Marmore’s Kuwait economic themes report, Kuwait continues to be extremely reliant on oil for revenues. On an average, hydrocarbon revenues accounted for c.80% of overall revenues in the past five year period (2009-2014). While part of the oil revenue is saved as sovereign wealth fund, most is channelled to the local economy in the form of wages for public sector employees, large scale subsidies (energy, electricity and water), capital transfers and generous grants for its citizens.

Though some measures was warranted in part to mitigate the effects of global financial crisis and alleviate the rising social pressures, the deteriorating fiscal situation amid the lower oil price environment warrants relook at ways to augment revenue streams and curb wasteful expenditures. The slump in oil prices, has renewed focus on containing current expenditures, prioritizing capital expenditures and introducing measures to rationalize subsidies.

The Government of Kuwait must capitalize on the opportunity offered by low oil prices to contain expenditures, which are skewed towards current expenditures  (c.90% of expenditures have been current in nature) rather than the productive capital investments, by introducing appropriate reforms in labour market, energy market and by focusing on removing subsidies in a phased manner. The price of petrol (KD 0.06/litre) in Kuwait is cheaper than water (KD 0.10/litre) and electricity prices have remained unchanged for nearly 50years. Electricity prices in Kuwait were last revised in 1966 and it is currently offered at less than 5% of the production cost. At the rate of KWf 2/kW against a production cost KWf 41.4/kW remains among the lowest globally. In this regard, introduction of taxes – direct (personal tax, business tax) as well as indirect (service tax, consumption tax), raising costs of government services in a gradual and phased manner could be considered. Although Kuwait maintains a high level of sovereign assets, dipping into it will only result in a short term fix and implementing a long term solution such as introduction of taxes seem more prudent. Acording to Marmore’s Kuwait economic themes report, business taxation and subsidy rationalization should not be seen as mutually exclusive actions to ease the fiscal situation. If business taxation is being seen as a route towards furnishing the revenue side of the budgetary equation, then it would make for poor policy to divest it of any linkages with subsidies reform. It is, indeed, the case that subsidies’ reform can prove to be sensitive among several stakeholders; however, increasing the tax burden on the private sector in lieu of gains from subsidies reform can harm the long term prospects in terms of economic diversification. The measures, if done in tandem, could help avoid subsidy leakages, ensure continued infrastructural spending and help improve competitiveness of Kuwait economy. Job creation for nationals and the need to increase the role of private sector in the economy, is also widely stressed. 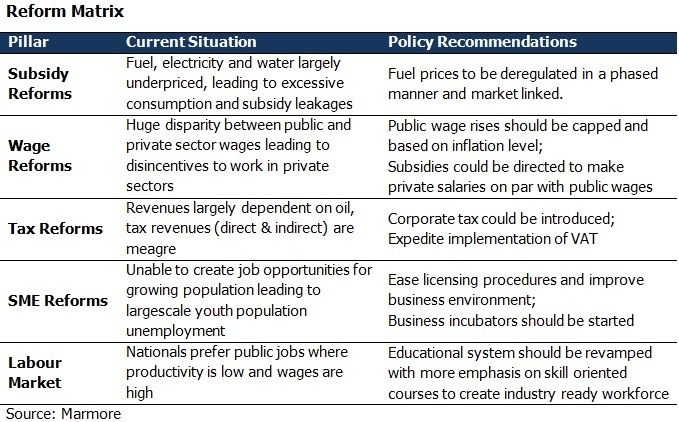 Kuwait, with a low fiscal breakeven oil price of USD 51.8/barrel in 2016, is expected to weather the environment of lower oil prices better than its GCC peers. This is also, in part, due to the presence of ample fiscal reserves and buffers which stands at 323% of GDP. Kuwait, with low debt and higher fiscal reserves, accumulated during periods of elevated oil prices, could resort to raising debt in the domestic market, international market or draw down on its buffers or a mixture of both. The actions of the government, in this regard, in the coming months will be keenly watched as it would have wider implications on the economy.