Major Tourism Trends in the GCC

Middle East attracts tourists throughout the year for its beautiful beaches, cultural and archaeological sites, and nature tourism. The region offers various entertainment and shopping avenues, and myriad of attractions. Also considerable amount of pilgrims visit during the Hajj season. 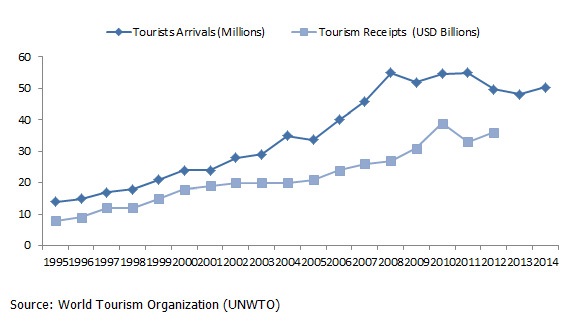 Middle East region on an average has tourism visa openness score (indicates to what extent a destination is facilitating tourism)of 18, whereas advanced economies and emerging economies have average scores of 27 and 32 respectively. 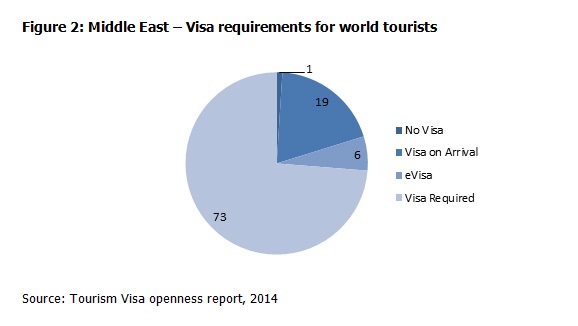 The region has the highest percentage of the world’s population that are able to apply for an eVisa. However, the abolishment of any visa is the lowest among all five regions, with only 1% of world population not required to obtain a visa of any kind.

The UAE topped among all the GCC countries in terms of tourism visa openness scores. Tab. 1 shows openness score range for the GCC countries. The UAE has relaxed its visa procedures for 20 countries in the period 2010-13. The UAE authorities have taken many steps to make visa processing as simple as possible. Citizens of 39 countries (including other GCC nations) can avail visa-on-arrival. In addition, there are efficient systems like e-Visa, for citizens who do not belong to those 39 countries. To increase the number of tourists visiting its country, Bahrain introduced an e-Visa for 3 or 7 days to the nationals who have a Resident Permit for any GCC country, to travel to any other GCC country, if they are traveling through Bahrain International airport. The residence permit must be valid for another 6 months on the date of arrival in Bahrain.

It is estimated that the tourism industry in GCC region roughly accounts for 5.7 per cent of the combined GDP of the GCC countries for the year 2014. 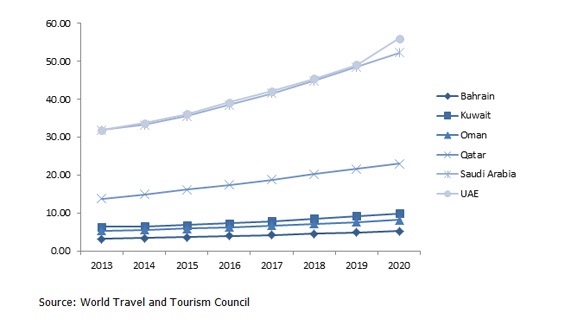 As the table shows, the UAE continues to lead the MENA region and is ranked 28th overall. Although the UAE is not endowed with rich natural resources, it has built a cultural resource base, attracting both leisure and business travellers, with several international fairs and exhibitions, and increasingly diverse industries. The most important competitive advantage of the UAE is that it is a major hub for international air travel, connecting the east to the west. Further, the country has carried out effective marketing and branding campaigns and has embraced policy rules and regulations that are conducive to the development of the sector. In particular, the country is open to foreign investments and has a liberal visa regime. The travel & tourism sector’s direct contribution to GDP is highest for UAE among the GCC countries and is estimated at USD 31.96 billion in 2013 (8.1per cent of GDP), an increase from USD 30.6 billion in 2012 (7.97per cent of GDP). Thereafter, it is projected to expand at a CAGR of 8.37per cent to USD 56.1 billion in 2020.

Expo 2020 will have a significant positive impact on the tourism sector. Expo will attract more than 25 million visitors, 70 per cent of which will be from outside the UAE — the largest number of international visitors in Expo history. These visitors will be open to discover other parts of the country thereby increasing the tourism activity. Dubai shopping festival, the biggest shopping and entertainment extravaganza in the Middle East is another technique of promoting tourism in Dubai. Their authorities ensure to organize remarkable events to attract many tourists, number of tourists have been increasing every year. In the last few years, the number of visitors to the Dubai shopping festival is estimated to be around four million and an increase of 5 to 10 per cent increase is anticipated for the 19th edition to be held in 2014.

Qatar is ranked 2nd in the MENA region, and 41st overall based on Travel & Tourism competitive index. Qatar benefits from a safe and secure environment, good ICT and tourism infrastructures, and excellent air transport infrastructure, in line with its role as an air transportation hub. The ease of hiring foreign labour and the quality of its education drive the ability of the country to find high-quality human resources inside and outside the country. Qatar also has a high degree of customer orientation. Qatar placed tourism sector as a strategic pillar within its National vision 2030, it recognized that tourism can play a role in boosting the image of Qatar, diversifying its economic base and driving sustainable development in the country. The government’s strategy over the last few years has been to promote sustainable tourism by improving transport infrastructure and developing attractions, such as the Museum of Islamic Art and the Cultural Village. Qatar has won the bid to host the FIFA 2022 world cup; the country’s tourism authority plans to invest about $20 billion on tourism infrastructure as the number of tourist arrivals grows at a rate of 15.9 per cent compounded annually, to reach 3.7 million by 2022.

Bahrain is ranked 4th in the region and 55th overall. The country maintains a number of clear strengths: good transport infrastructure; high-quality human resources in the country; and strong price competitiveness. However, Bahrain is witnessing a weakening in its tourism infrastructure, as health and hygiene standards, and ICT infrastructure struggle to keep up with rapid population growth. Also, its limited natural resources and poor environmental sustainability do not help the country to attract tourists. UNWTO organized an International Conference on Exploring New Cultural Horizons for Tourism, in 2013, in Manama, Bahrain. The Conference was aimed to explore new horizons for cultural tourism, identify innovative means to widen communities’ involvement in the development of tourism products based on cultural heritage assets, in particular on the intangible heritage and living culture of host populations, thus creating new socio-economic opportunities for all through sustainable and responsible tourism development.

Saudi Arabia is witnessing massive investments and expansion projects in an attempt to attract larger number of tourists to the Kingdom. One of the major projects is the expansion of King Abdul Aziz International Airport, which is poised to accommodate up to 80 million travellers by 2035 . The Jeddah Summer Festival is one of the largest events in the Kingdom. In 2013, the festival attracted roughly around 2 million visitors. The festival, which includes programs for families, children, and youth, provides investment opportunities to investors in the tourism sector. According to Supreme Commission for Tourism and Antiquities (SCTA), visitors to Jeddah during the festival spend over SR 4 billion on hotels and restaurants and the visitor arrival numbers are expected to increase at a CAGR of 10–20per cent every year . The huge spending bodes well for the provincial economy and domestic tourism in the Kingdom as a whole, with occupancy rates in hotels going up significantly. The spending also benefits local industries. The number of people performing Hajj is increasing by the year, and is estimated to increase to almost 17 million by 2025. The high number of travellers has contributed to the development of the religious tourism industry.

In April 2013, the Tourism Ministry of Oman announced the “Tourism Challenge Program”, which would focus on providing training to young Omanis, enabling them to start their own projects in the tourism sector.

Regional Programme for the Middle East has announced that a new UNWTO Regional Capacity Building Course on Tourism Strategy will be held in Doha from 11 to 15 May 2014, in cooperation with the Qatar Tourism Authority and the UNWTO. It is conducted with an intension to develop the capacity, knowledge and skills and implement effective tourism development strategies that will ensure destination competitiveness and sustainability whilst benefiting the local communities.