Move towards renewables - Where is the problem?

The total power generated through renewables in the GCC has grown from a meagre 20 GWh in 2010 to 620 GWh in 2015. But looking at the bigger picture, it constitutes to less than 1% of the total power generated in the region while the global figure is at 23.3%. Europe and North America stand at 34.2% and 22% respectively in 2016 with Norway leading the way with 97.87%.

Norway has long been a pioneer in renewables with focus on clean energy despite having oil reserves comparable to countries like Oman. Prudent energy policies over the last few decades have enabled them to adopt renewables at a very early stage thereby allowing their oil resources to be used for exports. This has not only helped their economy grow, but also helped them achieve it without foregoing environmental sustainability.

While there is a huge scope for improvement in the GCC countries, we need to take into consideration the fact that historically, power generation through fossil fuel has been cost-effective for them. As renewables were not a lucrative option for energy production, there was no urge in considering alternatives. But the landscape has been changing lately as rapid urbanization has increased the need for energy. This has in turn led to increase in domestic consumption of resources and rise in air pollution which are forcing the hand of GCC countries to look at renewables.

Cost of Renewable Energy
Globally, there has been a reduction in LCOE(Levelised Cost of Energy) (LCOE is calculated by dividing lifetime cost of project divided by the lifetime Energy production of project. LCOE is used to compare the relative cost of energy produced by different energy-generating sources) ranges of renewable energy sources between 2010 and 2016 with Solar PV’s weighted average LCOE coming down by more than 50% from USD 350/MWh to  USD 140/MWh. This brings the cost of power production by solar energy within the range of fossil fuels.

Cost of production of renewable energy is competitive in the GCC despite the recent fall in the prices of fossil fuels. The LCOEs of the PV projects at utility scale in the GCC region are comparable to the LCOE of electricity generation from oil when oil is priced at USD 20 per barrel. With crude oil priced at around USD 50 per barrel now, the case for greater integration of solar PV in the oil-based power sectors is strong.

What if 5% of total power is produced through renewables?
From an economic standpoint, we look at the savings made if there is a change in the power mix. We take the case of UAE, in 2016, only 0.23% of the total power in UAE was produced through solar energy. If it grows gradually to 5% by 2020, we estimate that it could translate into cumulative savings of around USD 4.1 Bn in the next 5 years through savings from cost of production and the export of saved oil. 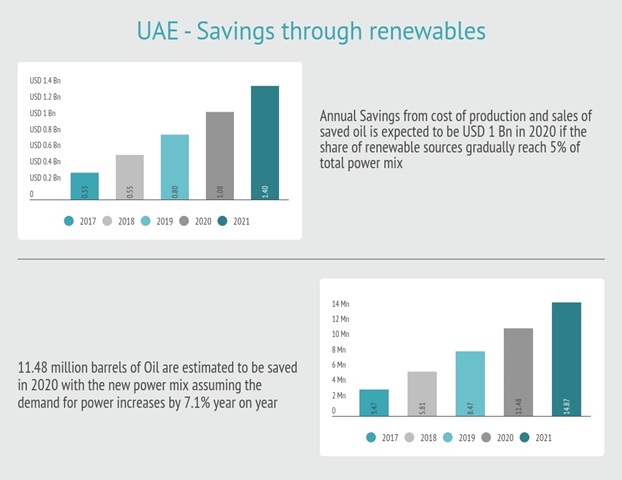 Aggressive targets and sizable investments
Globally, renewable power generating capacity saw an increase of 9% in 2016 compared to the previous year. Investment flow towards renewables has been steady with the spending exceeding USD 200 bn every year for the past 7 years. New investments of USD 264.8 bn was seen in 2016 with main focus on solar power closely followed by wind power. In the same year, renewables accounted for an estimated 62% of net additions to global power generating capacity. GCC countries have also made sizeable investments over the past few years and have set their long term targets.

Saudi Arabia, world’s biggest exporters of crude oil is moving towards the construction of its first utility-scale wind-power project at Dumat Al Jandal. It also plans to develop 30 solar and wind projects over the next decade as part of a $50 billion program to increase power generation and reduce its oil consumption.

Kuwait, one of the earliest advocates of renewable energy in the Middle East has set its sight to meet 15% of its energy requirements from renewable resources by 2030. Construction is now in progress for Phase I of the 2GW Shagaya Renewable Energy Park. Al-Abdaliyah Integrated Solar Combined Cycle plant is another power generation project under construction has an overall capacity of 280 MW. Kuwait has also planned to issue a tender to build the estimated USD 1.2 billion Dibdibah solar-power plant in the first quarter of 2018.

The United Arab Emirates is investing USD 163 billion in clean energy projects to ensure that half of the country’s power needs are generated from renewable sources by 2050. Dubai’s 13MW first phase of the Mohammad Bin Rashid Al Maktoum Solar Park received the International Renewable Energy Certificates (I-REC) issued in 2017, making it the first in the region to adopt the I-REC (I-REC is a voluntary system for international trade in renewable-energy certificates.) system.

The late adoption of renewables in the GCC countries could be attributed to the abundance of fossil fuel and their cost effectiveness in the past decades. With majority of the power being produced by conventional sources it would take time for the shift to materialize. Considering the impact on the Power sector as a whole and the employment opportunities it generates could also be major reasons for this procrastination. Further, policies have generally been revolving around Oil while environmental sustainability has not been considered a priority. However, going forward the reducing cost of solar power generation, advancements in technology, favorable geographic conditions and the increasing need to sell more oil to compensate the lower prices would now make renewables an economical and environmentally viable option for power generation. As it stands, the growing investments in the past few years towards renewables could very well pave way for a paradigm shift towards a balanced energy dependency between fossil fuels and renewables in the years to come.