According to our recently released Monthly Market Review for the month of November, GCC equity markets took a downturn due to the negative performance of the UAE and Saudi Arabian markets. Global equities saw a positive momentum buoyed by a strong recovery in the emerging markets. Kuwait was the best performing GCC market during the month, gaining 1.3% for the month of November.

Kuwait finally broke out of its three-month losing streak and became the best performing market in the GCC region for the month of November. The Kuwait All Share Index gained 1.3% for the month with the YTD returns moving up to 8.4% as investors welcomed the initiatives by Central Bank of Kuwait (CBK) to revive the credit growth and boost consumer spending by increasing the personal loan limit from KD 15,000 to KD 25,000. Zain Telecommunications, which registered the biggest loss in the month of October, emerged to be the best performing blue chip Company from Kuwait, gaining 4% during the month. Boubyan Bank continues to be one of the best performing blue chip stocks, with a monthly gain of 3.4% and an YTD return of 30.5%. Recently, Boursa Kuwait introduced an electronic platform that shall enable the existing Over-The-Counter (OTC) market move to a platform for conducting transactions, which shall benefit investors in trading unlisted securities. Interestingly, liquidity in Boursa Kuwait increased during the month, with average daily value traded increasing by nearly 7% compared to October.

The S&P GCC index took a downturn in the month of November. The index fell 2% for the month, drawing down on the overall gains for the year, which now stand at 7.6%. This was mainly due to the sharp fall in oil prices, the continued trade war uncertainties and geo political concerns plaguing Saudi Arabia. Saudi Arabia, Abu Dhabi and Dubai saw large pullbacks with the Saudi Tadawul index, Abu Dhabi index and the DFM General Index falling 2.6%, 2.7% and 4.2% for the month of November, respectively.

The beat down in Dubai stocks continued for the fourth straight month as Dubai’s DFM General Index extended its losing streak, falling by 4.2% during November and 20.8% in YTD 2018, making it the worst performing market in the GCC region for the November month. The impact of a steep fall in the oil market as well as geopolitical concerns were finally visible in the Saudi stock market with the main index falling 2.6% for the month. Overall, Qatar and Bahrain indices gained 0.6%, and 1.1% respectively, whereas, the Oman and Abu Dhabi index lost 0.2% and 2.7% during the month. Ezdan holdings and Masraf Al Raya were the top two performers among GCC blue chip companies, rising by 16.4% and 5.5% during the month respectively.

The U.S. markets have been volatile this month as energy companies were battered due to a free fall in oil prices and a slump in tech stocks brought the S&P 500 Index down to its lowest levels in five months. However, recovery seen in the last weeks of trading pushed the S&P 500 to register a MTD performance of 1.8%. The Federal Reserve is still expected to raise interest rates next month and three times next year, but US Fed Vice Chairman Richard Clarida said that there is some evidence the world economy is cooling down and that they would be more cautious moving forward on their pace of increasing interest rates. MSCI World Index gained just 1.0% in the month of November.

The economy is facing a growing number of headwinds, including the lagged effect of previous interest rate rises and dollar strength, the uncertainty of trade protectionism at a time when external demand is slowing, and a sense that the support from the fiscal stimulus will gradually fade. The main risk to the upside likely stems from the tight jobs market and whether wages can continue rising. According to the estimate released by the Bureau of Economic Analysis real gross domestic product (GDP) increased at an annual rate of 3.5% in the third quarter of 2018 as compared to a growth of 4.2 % in the second quarter.

Trade tensions and tightening financial conditions was the primary contributor to weakness in EM equities last month but we saw strength returning to the markets this month. MSCI EM index went up 4.1% in the month of November. A slower pace of US Fed rate hikes would weaken the dollar and aid emerging markets moving forward. Morgan Stanley said it upgraded emerging market stocks from “underweight” to “overweight” for 2019, while U.S. equities were downgraded to “underweight”. On the other hand, the UK continues to be plagued by Brexit uncertainties with the markets falling 2.1% this month. Britain is due to exit the world’s biggest trading bloc on March 29 but it remains unclear whether British PM Theresa May’s draft divorce deal agreed with the EU will pass in the parliament on Dec. 11.

The oil market was under focus this month as we saw an acceleration in price downturn. West Texas Intermediate crude is down close to 33.06 % since hitting a four-year high of $76.41 in October and a MTD fall of 22.07%. Brent crude continued to fall adding to its momentum from last month, with a MTD performance of -22.2%. Record high oil production from the United States and a slowing global demand for the commodity can be cited as reasons for the negative performance in the oil market. China’s demand for oil by-products, dropped to the lowest level in 13 months, according to Reuters. Additionally, exemption of eight countries, including India and China, by the U.S. from the sanctions imposed on Iran contributed to the supply overhang. OPEC is preparing to pull back output on expectations that the oil market will be oversupplied next year. 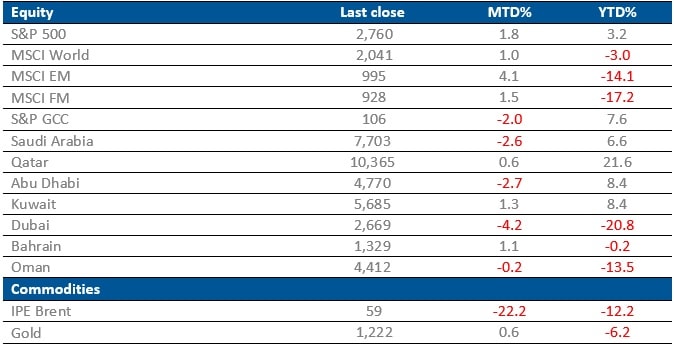