Revealed: The 30 most valuable non-banking companies in GCC 30

ROE is one of the important parameters that is used to evaluate the strength of the company as well as the return the company generates for the equity holders. ROE is also a measure of efficiency of functioning of the company. Debt to equity (D/E) indicates the leverage and thereby the risk the company faces due to its capital structure. As D/E ratio is a comparative measure, we have ranked the companies based on the measure to indicate companies that are less risky and have durable business models compared to other companies in GCC. PAT growth percentage is considered as it is important for the companies to increase their profits over the years in order to be sustainable.

Top 30 Most Valuable Companies
Top 30 most valuable companies have been weighted on the three parameters and ranked based on the quality score. Jarir marketing with its low leverage of 0.03 and average annual PAT growth percentage of 13% registered an astonishing ROE of 57.86%. This indicates that the company operates with minimum risk and yet has generated better returns for the equity holders. Net profit of Jarir marketing increased by 11% in 2015 compared to its net income in 2014 mainly due to increase in revenue from the retail segment. In 2014, the company reduced its debt to equity ratio to 0.1 and in 2015 it was further brought down to 0.03 as the company repaid its long term debt with the excess cash it generated.

Similarly companies such as Arabian Cement Company, Medicare group and Taiba holdings registered average annual PAT growth percentage of 67%, 68% and 80% respectively. The top 5 most valuable companies have maintained D/E ratio lesser than 0.1 (except Al Tayyar Travel Group). Al Tayyar Travel Group Holding, despite having a D/E ratio of 0.37 had registered a higher ROE of 34.1% and its average PAT growth percentage was 16% due to which it ranked 4th among the most valuable companies in GCC.

Medicare group’s net profits surged by 316% from USD 12 Mn in 2012 to USD 50 Mn in 2015. The surge in profits were mainly due the business expansion of Medicare group and thereby higher revenue generated from core operations increased.

Saudi Cement Company (SCC), one of the largest cement manufacturers in Middle East, reduced its D/E ratio from 0.3 in 2011 to 0.22 in 2015. SCC repaid most of its long term debt with retained earnings as a part of the corporate strategy determined in 2011. SCC has also streamlined its operations and improved its operational efficiencies. However, increasing labor expenses due to Saudization led to decline in net margins from 53% in 2014 to 48% in 2015. Yanbu cement has one of the best operational efficiency among the cement companies in GCC. It has continuously expanded its capacity since 2008, in anticipation of increased demand. With low costs of operations, the company’s average PAT grew at 4% and with D/E ratio of 0.04, the company generated ROE of 22.29%. 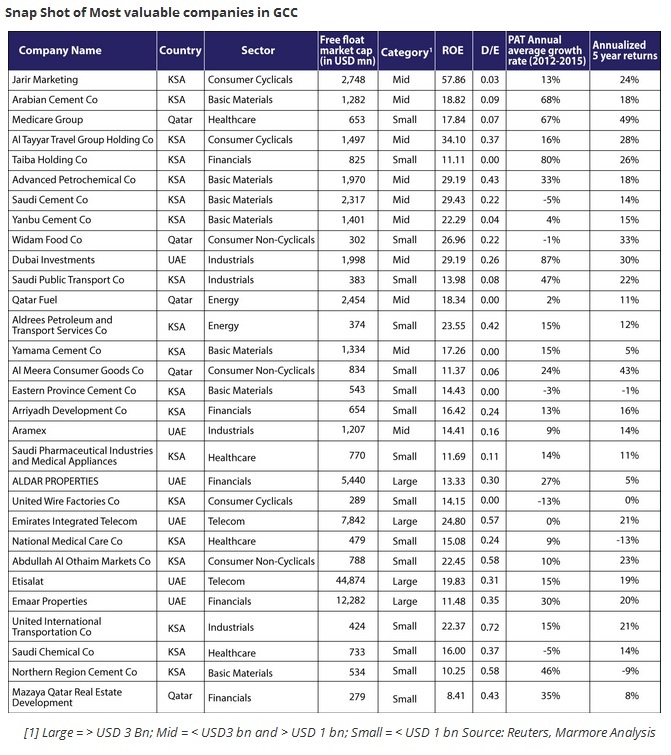 Among the top 30 most valuable companies, there are only four large cap companies from UAE, two each from the real estate and telecommunications sector. There are 10 mid cap companies and 16 small cap companies, mainly from the basic materials and consumer non-cyclicals sector respectively. 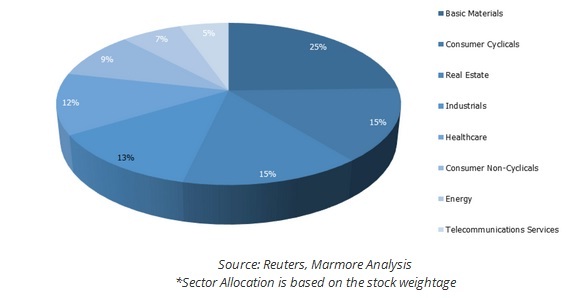 Medicare Group and Al-Meera were the companies that registered maximum returns (5 year CAGR) of 49% and 43% during the same period. Medicare Group, Qatar registered an average PAT growth of 67% during 2013-2015 and the return on investment (ROE) in 2015 was 17.84%. Foreign investors invested heavily in the stock in 2015 as they felt the outlook for the company was positive with its strong fundamentals apart from the positive outlook for the sector in Qatar. Al-Meera consumer goods (Qatar) has expanded its operations in the past and witnessed increase in sales in 2015. The average PAT growth percentage was 24% (2013-2015) and the ROE was 11.7% in 2015. The company has planned for major expansions in the coming years and has attracted investors from Qatar and GCC (Reuters, Peninsular Qatar).

On performing a back-test for a portfolio consisting of the top 30 companies, it can be seen that they have outperformed the S&P GCC index by 175% during the period 2011 and 2015. Financials sector accounts for 51.6% of the weightage in S&P GCC index. Poor performance of the financial sector companies with heavyweights such as National Commercial Bank, Qatar National bank, Al Rajhi Banking, Samba Financial group and National Bank of Kuwait in the index led to the poor performance of the S&P GCC index.

As evidenced from the analysis and the back-testing, screening and selecting most valuable companies based on fundamentals might yield better returns in the long-term (5-years) in stock markets. These companies have a sustainable business model that fosters growth. However, it is important to note that in hindsight, it is easy to come up with such a portfolio and success of even a valuable company in the stock market is not certain due to extraneous factors that impact stock prices.