The housing market in the Kingdom of Saudi Arabia (KSA) continues to face the crisis of supply shortage and ever-increasing demand. High population growth and rising per capita income fuelled the growth of demand for residential units over the past decade. With the population expected to reach 35mn in 2020 from 31mn in 2014, and average household size estimated to reduce from 5.6 to 5.28 as per current declining trends, aggregate demand for housing units is forecasted to be 1.6mn units over 2015-20. As of 2015, less than half of the population of KSA were homeowners compared to 64% for the U.S. which has a similar per capita income.

Affordability and access to mortgage finance are the key barriers to home ownership. Lack of regulations on foreclosures and absence of securitization of housing loans has increased cost of financing and thereby, making it unaffordable for the majority of medium-income households.

Only 2% of all home purchases in the Kingdom are financed through mortgages compared to 17% in the U.A.E and 70% in the U.K. Currently majority of mortgages are provided by Real Estate Development Fund (REDF).

In order to meet the rising demand for housing, affordable mortgage financing must be made available to the currently underserved middle market segment. Taking into account the growing demand and subsequent impact on house prices, providing affordable housing will be a considerable challenge for the KSA Government. The mortgage financing activity was carried out mostly by the 14 banks and five licensed real estate finance companies. In addition to the existing finance companies, in December 2015, Saudi Arabian Monetary Agency (SAMA) granted mortgage finance license to Bidaya Home Finance. Additionally, the Ministry of Finance for similar purpose has established the Real Estate Development Fund (REDF).

The total loan extended by banks to real estate segment which includes retail and corporate lending was at USD 14.5bn at the end of 2009.  However, it grew at a CAGR of 23% during the 2009-2015 period to reach USD 50.3bn. The retail lending grew at a CAGR of 24% compared to corporate lending which grew at a CAGR of 22% during the same 2009-2015 periods. The retail real estate lending which grew at the Y-o-Y rate of 17% and 28% in 2010 and 2011, with the introduction of mortgage law in 2012 witnessed a sharp increase of 31% in 2013 and 34% in 2014. The demand for mortgage loans triggered by reasons such as housing demand and supporting mortgage law was expected to increase at the higher rates in the coming years. However, the growth rate lost momentum primarily due to the affordability factor.

REDF Lending
The REDF is the largest Specialized Credit Institution (SCI) and provides personal and investment loans for housing development. Given the shortage of housing stock in Saudi Arabia, real estate development has been receiving significant attention from the Government. This included USD 67bn allocation by the Saudi King in 2011 to build housing units (not yet utilized) and the use of REDF loans as down-payment to meet the 70% LTV requirement for mortgages that was introduced in 2014. Real estate lending has increased significantly in recent years, with the outstanding volume at end-2015 reaching USD 40bn for REDF (compared to USD 21bn in 2011) and USD 50bn (compared to 19 billion) for banks. 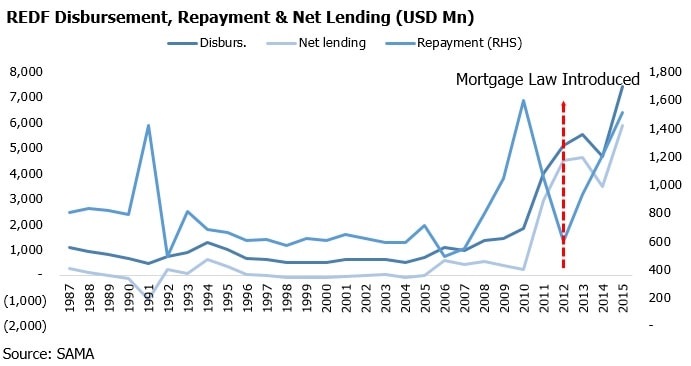 Despite the existence of REDF from 1974, the disbursement of funds by REDF have been very sluggish. Until recently the waiting list for an REDF housing loan was estimated at a staggering 18 years.  Between 1987 and 2010 the total disbursement by REDF was USD 20bn. Taking into account the repayment, the net lending by REF during the same period was approximately USD 2bn. However, in 2011, the government unveiled a plan to build 500,000 homes, allocating large amounts of state funds. Progress has been slow, partly because of ownership rights over land. However, subsequently the REDF became more active with increasing loan disbursements. Between 2011 & 2015, REDF disbursed real estate loans worth USD 26.7bn and the net lending during the same period stood at USD 21bn.

Mortgage Loans Outstanding – Outlook
As per Marmore’s report on the Saudi Mortgage Industry, starting from 2015, the mortgage loans is expected to grow at a CAGR of 24%. The Housing Ministry is anticipating the bank’s mortgage loan book to increase by USD 5bn to 8 bn a year till 2020, and, has set in motion several initiatives such as reduction of down payment required by mortgage seekers to 15%, introduction of white land tax. However, given the liquidity tightening in the banking sector and economic slow-down due to drop in oil revenue it is likely to impact the mortgage sector’s performance on the whole.

Over the coming years the REDF lending is also expected to continue to increase to reach USD 73bn by 2020 as against USD 40bn at the end of 2015. REDF was allocated USD 67bn billion in 2011 to be spent on half a million new houses. As a result there has been a significant increase in roll-out of loans by REDF in the recent years and it is expected to continue in the coming years. REDF disbursed loans worth USD 7.4bn in 2015, and loans worth an average of USD 8bn is expected to be issued by REDF on yearly basis. Apart from the capital boost received from the government, the growing interest in issuing Islamic bonds and securitizing the portfolio of the REDF loans can substantially increase the liquidity position of the fund and assist in rolling out more mortgage loans.

Inititives such as the Housing Ministry’s plan to create its own development company and start a mortgage-guarantee fund is expected to encourage banks to increase lending. Moreover, starting a state-owned mortgage firm similar to the U.S.’s Fannie Mae and Freddie Mac to develop the secondary market for the mortgage industry would go a long way to boost liquidity.  In November 2015, Saudi Arabia approved proposals for a 2.5% ‘white land tax’, which will apply to undeveloped residential and residential/commercial plots within urban boundaries. The implementation of this new tax in late 2016 is expected to culminate into several benefits. In simple terms it is expected to increase the real estate development activity and simultaneously resulting in reducing further appreciation of land values. Additionally, the Government may opt to allocate the supplemental revenue for the development of affordable housing. Once the new tax law comes in effect, this could result in increased partnership between developers and land owners to develop their land banks. The law could also stimulate further development to address the severe shortage of middle income housing across the Kingdom.