Until the issuance of the Mortgage Law (prior to 2012), the finance sector regulations in Saudi Arabia, in particular the home finance segment was underdeveloped. The lenders were hesitant to provide financing due to ambiguous regulations and challenges associated with enforcing their rights. These risks added to the costs of financing making it expensive for the borrowers. The traditional practice followed by the Saudi banks was to offer home buying loans primarily secured by banks’ automatic deduction of loan repayments from borrowers’ salaries unlike mortgages which are secured by the properties being acquired. During the absence of the mortgage law the banks held the title of the real estate as collateral for the term of the loan. However, this scenario is anticipated to change with the implementation of the mortgage law.

Mortgage Law in Brief:
The real estate mortgage law, introduced in 2012, is a collective package of five different laws comprising:

Mortgage penetration rate (mortgage debt as a percentage of GDP) in Saudi Arabia is at 2%, compared to 5-10% in the neighbouring GCC countries. In contrast, developed countries like the US and UK, have mortgage penetration rates of more than 70%. The mortgage law was expected to strengthen the Saudi mortgage market by providing greater comfort to mortgagees when lending, transform the home financing in Saudi Arabia to property-secured lending from the existing practice of extending loans based on salary assignment. At the same time, make affordable residential housing finance available for its citizens.

The total loan extended by banks to real estate segment which includes retail and corporate lending was at USD 14.3bn at the end of 2009.  However, it grew at a CAGR of 22.6% during the 2009-2014 periods to reach USD 39.7bn. The retail lending grew at a higher CAGR of 27.3% compared to corporate lending which grew at a CAGR of 16.5% during the same 2009-2014 periods. The changes were expected to increase residential lending to about USD32 billion annually. The residential financing market size estimated at USD 35bn between 2014 and 2019 prior to the implementation of the mortgage law, is expected to increase by 60% over the same period and to be valued at USD 56bn with the implementation of the mortgage law. 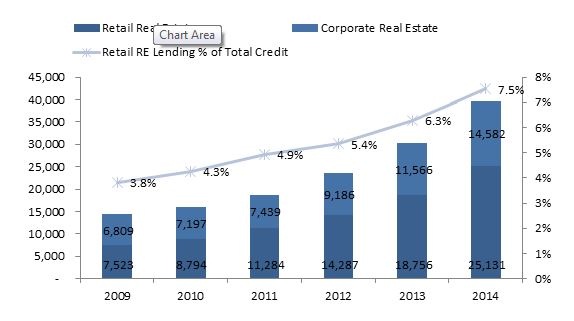 The enabling of refinancing via securitization and government support in the form of loans and long-term deposits to avoid asset-liability mismatch would increase the liquidity in the mortgage banking system and resulting in higher/easier disbursement of mortgage financing to the potential home buyers.

The Government employees were the main beneficiaries, accounting for almost 85% of Saudi home loans market and remaining coming from government owned private entities during the pre-mortgage law practice of ensuring the lender is paid prior to the borrower receiving the salary. With the implementation of the new law, self-employed and lower income individuals under the monthly income bracket of SAR 6,000 – 9,000 were expected to be included as target audience. And thus, the demand for the number of home units, that will require financing over the next 5 years, expected to increase by 60%. The increased demand for housing especially the lower unit price houses due to affordability was expected to exert upward pressure on prices unless the supply increases to meet the increased demand.

The initial impact of the mortgage law was positive during Q2 2012, achieving fastest growth of home lending compared to the previous four years. Mortgage lending during Q2 2012 increased by 83% to reach USD 12.8bn compared to Q2 2011. However, the mortgage lending market wasn’t able to sustain this growth in lending for long. By the end of 2014, the new mortgage laws in Saudi Arabia had resulted in shift from owning to leasing the properties. This shift in demand from buying to leasing the residential properties has caused sale prices to either remain stagnant and also decrease in some markets, at the same time has led to an increase in the lease rates.

As per JLL estimates, the sales price of residential units in Jeddah increased more than rentals compared to 2013 during the first 3 quarters of 2014. However, the trend reversed in the Q4 of 2014; with 3.2% decline in average apartment sales price and 9.3% increase in the rents. The shift in demand for renting of residential properties compared to purchase is attributable to the mortgage regulations restricting loan-to-value (LTV) ratio to a maximum of 70%.

The Saudi Arabian Monetary Agency (SAMA) regulation of loan-to-value (LTV) ratio of 70% for mortgages was aimed at preventing a collapse in the local housing market by averting a move towards over-indebtedness. However, this turned out to be an impediment, curbing the demand and pricing out the potential buyers who are unable to afford 30% down payment.

Based on the norms imposed by SAMA restricting the consumer’s credit to a maximum of 33% of monthly salary, the average monthly salary required to purchase a basic apartment is SAR 49,257. To steer the mortgage market and increase the levels of ownership which is around 30% at present, the mortgage legislation should allow lenders to access lower-income segments of the markets. Since the existing home financing infrastructure is stable with lower levels of default rate estimated at 2% and common practice of prepayment, the maximum LTV of 70% has to be reconsidered. However, since most of the borrowers purchase the house to live rather than investment, the increase in the rentals rate is likely to play the part of convincing the customers to consider home purchase rather than leasing as mortgage financing is an investment, whereas renting is an expense.