The Fintech Race between UAE and Bahrain 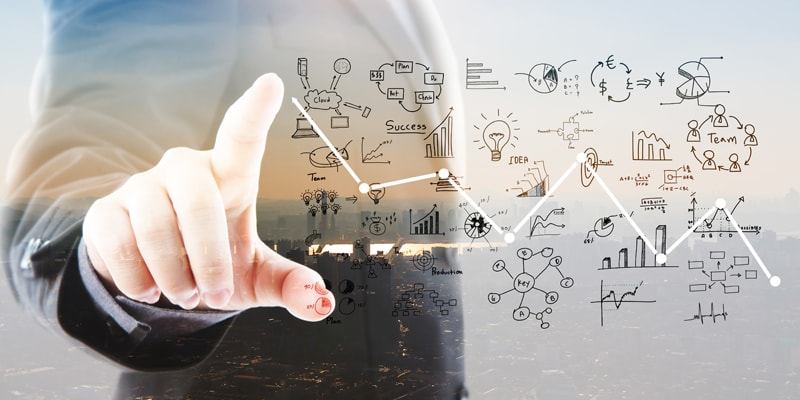 Bahrain, with the launch of dedicated FinTech Hub in Feb 2018 (Zawya), become the second country in the MENA region to have exclusive FinTech infrastructure followed by UAE. UAE is considered to be the leading hub for FinTech in the region (The National 2017), continuing boosting innovation and collaboration. UAE developed region’s first regulatory sandbox allowing new products to be tested for two years without full regulatory compliance.  FinTech in both the countries is in different stages where service domains and regulatory frameworks differ. A brief regulatory and trend comparison is summarised below,

In terms of regulation of service domains, standardization of services and data security laws, both the countries share similar features. Bahrain serves the objectives of consumer benefits and financial inclusion whereas as Abu Dhabi’s regulatory sandbox essentially focuses on innovation and competition, perhaps, in both the countries consumer protection framework is weak. However, regulatory sandboxes in UAE and Bahrain don’t have minimum capital limit. Bahrain and UAE still doesn’t have reporting requirements as Australia, Brunei and Hong Kong have currently laid out (Consultative Group to assist Poor, Report 2017). 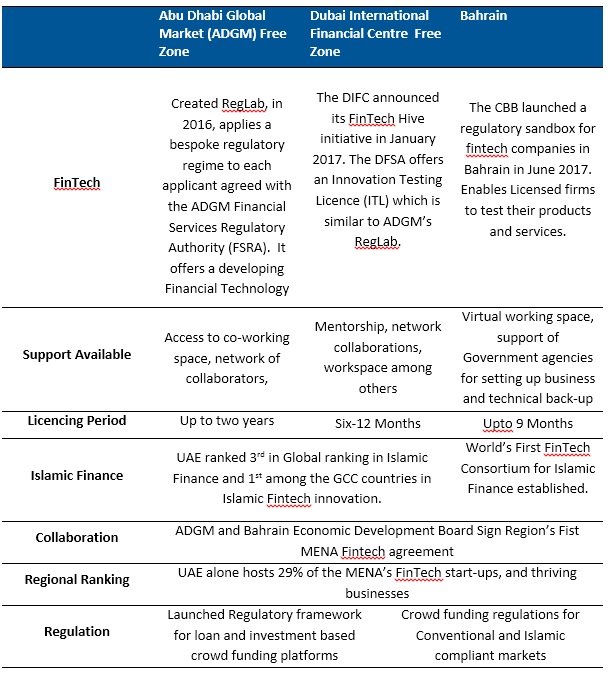 Bahrain in terms of Reglab, falls behind UAE.  Currently three Reglabs are operating in the UAE; first being launched in May 2016 and it was MENA regions first too, whereas Bahrain entered into cooperation agreement in January 2018 to launch Reglab in the country (Bahrain FinTech Bay Website, 2018). Hive at the Dubai International Financial Centre is among them. Overall, the Abu Dhabi Global Market FinTech hub is ranked as the top FinTech for the MENA region, by Deloitte in partnership with Global FinTech Hubs Federation 2017 (Abu Dhabi Global Market Website, 2017).

Regionally only few FinTech start-ups have managed to tap the opportunity existing between conventional financial services and growing needs of the consumers. One of such technology avenues is SME lending, an domain in FinTech universe that is expected to gain substantial pace in years ahead apart from payments, crowd funds, Islamic finance, Digital currency. However in Bahrain, currently, payments services and digital currency along with Micro Finance and InsureTech and RegTech are topping the services slots and innovation.

The Way Forward
UAE is ahead in comparisons with Bahrain in adaptation and building framework for the digital currency whereas Bahrain is in nascent stage to officially layout operating and regulatory framework. Dubai based blockchain start-up ArabianChain, launched a new digital assets exchange called Palmex in 2018, which enables users to deposit and trade currency including ArabianChain’s Dubai Coin. On top of it, UAE leads in blockchain technology, which established Global Blockchain council back in 2016. Furthermore, UAE and Saudi Arabia are expected to launch cross border digital currency soon. In the payments sector, Bahrain is active where recently Bahrain Islamic Bank is in talk with BENEFIT for development of client/consumer payments system and expecting to launch it shortly. BENEFIT, established in 1997, is licensed by the Central Bank of Bahrain as an ancillary service provider to the Kingdom’s financial services industry. BENEFIT is owned by Banks in Bahrain and by the Bahrain’s Central Bank.

Moreover, Bahrain’s start-ups ecosystem is diverse and spans the Kingdom’s key sectors, including tourism and F&B. Bahrain has traditional legacy strengths in the financial services sector as it was one of the key financial hubs of the region in the recent past. Also, Bahrain is likely to profit from the trend of consolidation of FinTech competences in the region, giving it a competitive advantage along with the UAE in terms of being early pioneers.