Trade Wars - How will it play out for the GCC?

The fears of a trade war were looming large ever since Donald Trump took charge as the U.S president. In an attempt to revive domestic industries, the U.S president has decided to levy charges on imports of steel and aluminum, signaling a potential trade war. After taking nearly a decade to bring back the optimism to the world economy post-financial crisis, the development of a trade war could become a deterrent to global growth.

Trade wars are an unfavorable outcome for any party involved as it could lead to rise in inflation and affect the global economy that is heavily dependent on trade. The ramifications of the tariff would not only be limited to the steel and aluminum industries, but also on dependent industries worldwide including the Oil and Gas industry. Trade dependent emerging markets such as China and Southeast Asia, which contribute to the majority of global oil demand growth, would face an economic slowdown, eventually affecting the price of Oil and thereby the economic growth of Gulf countries.

The U.S administration is moving ahead with the imposition of import tariffs of 25% on steel and 10% on aluminum, but has already exempted Canada and Mexico temporarily and offered to exclude other allies. There are also signs that these impositions are not likely to stop with steel and aluminum but continue onto a wide range of products. The move falls in line with the U.S President’s agenda to limit Chinese investments in the country and reduce the massive trade deficit existing between the nations.

Bilateral Trade in goods with the U.S during 2017 (in USD Bn)

Among GCC countries, Saudi Arabia and the UAE are the biggest trade partners for the U.S. with bilateral trade amounting to USD 35.1bn and USD 24.3bn in 2017, respectively. In the case of Saudi Arabia, Kuwait and Oman, imports into the U.S. were dominated by crude and related products while for the UAE and Bahrain, Aluminum was the main import commodity. Emirates Global Aluminum is the third-largest producer of primary aluminum outside China and the U.S accounts for 5% of total sales for Emirates Steel, the largest steel producer in the UAE (Reauters).

Why is a trade war not good for oil prices?
Consumption of oil and the health of an economy generally have high correlation; therefore, a slowdown of the global economy would result in shortfall of oil demand. Global oil demand which was expected to increase by 1.5 million barrels a day in 2018 (IEA estimates), is under severe threat owing to the protectionist stance taken by the U.S. A slowdown in global trade as a consequence of an anticipated trade war could be detrimental for the demand for oil in a situation where OPEC and its allies are trying to restrict supply and boost oil prices. China and other emerging economies like India, who are some of the major importers of oil, are expected to face an economic slowdown contributing to a shortfall in oil demand.

Despite the tariffs not having a direct impact on fuel, the construction and automotive industries which are dependent on metals would incur more costs triggering a slowdown in economic activity. Additionally, the fuel requirement in the maritime and transport industry will also come down. Long story short, a trade war is highly likely to result in oil prices going down. Hence, the GCC countries whose major source of revenues being oil are likely to face the aftermath if oil prices drop down.

Is there light at the end of the tunnel?
Apart from the obvious concerns over fall in oil prices, the direct impact for the non-oil industries are expected to be minimal at the moment for the GCC. The UAE, which is the third largest exporter of aluminum into the U.S after China and Russia, has sought for exemptions from the import tariffs(Reuters ).

However, GCC countries find themselves in an interesting position. In 2017, U.S crude exports into China amounted to 0.45 million barrels per day making China the largest market for the U.S outside North America. The U.S has been slowly chipping away the market share of Saudi Arabia in Asia, particularly China as WTI crude prices trade at a discount to Brent and other crude giving them a price advantage. Saudi Arabia, in contrast, uses Oman and Dubai prices as an underlying benchmark to price its oil in Asian markets.

Share of total oil imports from the U.S (in %) 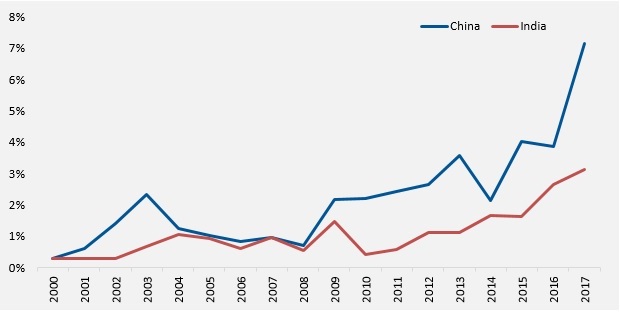 Although the size of U.S oil exports to China is small, it has been growing lately contributing to 7.1% of total crude exports from the U.S in 2017. Amidst the friction between U.S and China, a window of opportunity has opened up for oil producers from the GCC. Trade retaliation from China towards the U.S could allow them to capture a sizeable part of China’s lucrative oil market.

Despite drawing criticism on several fronts, the U.S administration is likely to move ahead with the import tariffs. Other nations are expected to retaliate with counter-tariffs and possibly move to WTO to resolve the issue. Whether this would turn into a full-fledged trade war between nations is yet to be seen. However, in any war, trade or military, there is no clear winner. Despite the claims from the U.S president that trade wars are good and easy to win, the likely outcome of it seems to be a loss-loss scenario for all parties concerned, ultimately making it a war where everyone loses.