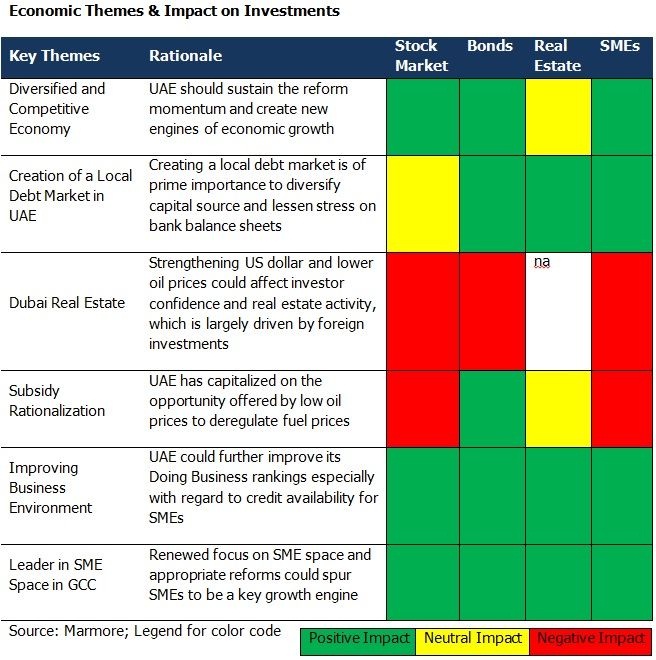 According to Marmore’s UAE economic themes report, Hydrocarbon sector is expected to contribute positively to real growth in 2016 as the phased increase in oil production happens. UAE had earlier set a target to raise its production capacity by 30% in 2020. Non-hydrocarbon growth is expected to be moderate in 2016, amid the lower oil price environment, as government expenditures are reined in.

Diversified & Competitive Economy
United Arab Emirates (UAE) has been the forerunner in implementing reforms to strengthen its business and economy among the GCC nations. Consequently, UAE has made significant progress in diversifying its economic structure. Share of hydrocarbon GDP to total GDP has fallen over the years. For UAE, being the least dependent nation on oil, IMF has estimated the revenue loss to be in the range of 5% to 20% compared to other GCC nations whose losses are estimated to be more than 20%. Notably, UAE is the only GCC nation to have diversified its exports to other sectors by more than 50% and therefore has lesser impact on its revenue.

Creation of a Local Debt Market in UAE
UAE’s sovereign debt commands an investment grade rating of Aa2 (Moody’s), AA (Standard & Poor’s) and AA (Fitch) with a stable outlook for the year 2016. Rating agencies cite the rating is underpinned by the presence of large scale fiscal buffers. 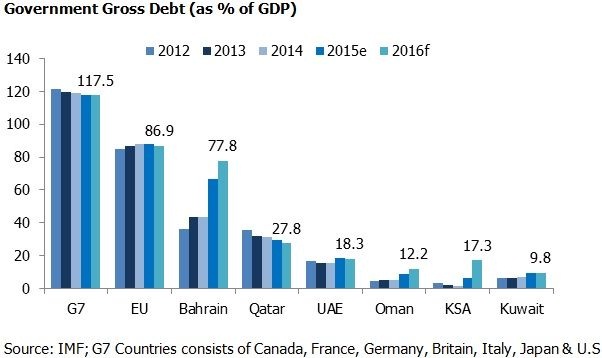 While UAE has so far not issued any debt instruments, it might do so in the coming year. Public debt law, which is required for issuance of federal sovereign bonds has been stuck in the government consultative process for the past five years. According to Marmore’s UAE economic themes report, raising debt in the domestic market, if done in a measured way, could help in the establishment of an active and liquid debt market.

Dubai Real Estate
Real estate sales were robust in the first half of 2014, supported by successful bid for Expo 2020, while the rentals in Dubai surged by more than three times during the 2013-14 period. With the rapidly increasing rental and sale value for the residential sector in UAE, it was anticipated that the sector was overheating, particularly in Dubai. Howeever, the lower consumer confidence following lower oil prices and a stronger U.S dollar post the recent interest rate hike by the U.S Fed, could further affect foreign investments into UAE, especially in the real estate sector. With sales in the real estate sector dwindling and prices declining, it is imperative other engines of growth are established.

Subsidy Rationalization
Assessing the impact of oil on revenues and GDP and comparing it with its peers, we can uphold that low oil prices will have lesser impact on UAE than other GCC nations. UAE’s government has introduced major fiscal reforms in order to cope with the low oil price and strengthen their economy to be more resilient in the coming years. The petrol prices in UAE post the subsidy cut are closer to average world prices. UAE however retains the diesel prices low in order to aid its transport and logistics industry which is currently traversing difficult waters.

Leader in SME Space in GCC
UAE has around 300,000 Small and Medium Enetrprises (SMEs), which represent 92 per cent of all companies and provide 86 per cent of jobs in the UAE market. UAE has plans as part of its Vision 2021 to increase SMEs contribution to non-oil GDP by 70 per cent. Despite various efforts by the government to boost their SME sector, funding remains a hurdle for most SMEs. Loans to SMEs account for only 4% of total outstanding loans. This deprivies SMEs of credit and they are most dependent on private financicers where the capital costs are high. Addressing the issues and ensuring availability of financing for SMEs could prove to be a game changer.