UAE’s Digital Pursuit - Where have they reached?

UAE has been at the forefront of technology adoption in the GCC region. From its adoption of open data to making block chain mandatory for government transactions by 2020, UAE perceives technology as a great enabler in propelling its country forward. It has kick-started initiatives from time to time in sync with the progress of the technology. Dubai announced its first ICT (Information and Communication Technology) strategy way back in 1999 and has followed it up with the launch of Dubai Internet City, Dubai e-government, Dubai Smart Government and more recently the smart Dubai Initiative in 2014. Abu Dhabi’s initiatives came almost half a decade later in 2005 when the Emirates adopted Information technology in its government departments, authorities and administrators. UAE has always been ranked high among the Middle East countries owing to these initiatives and given the fact that consumption side of digital technology has been higher while supply side lags behind which the government is addressing through its push via its pursuit of digital initiatives. 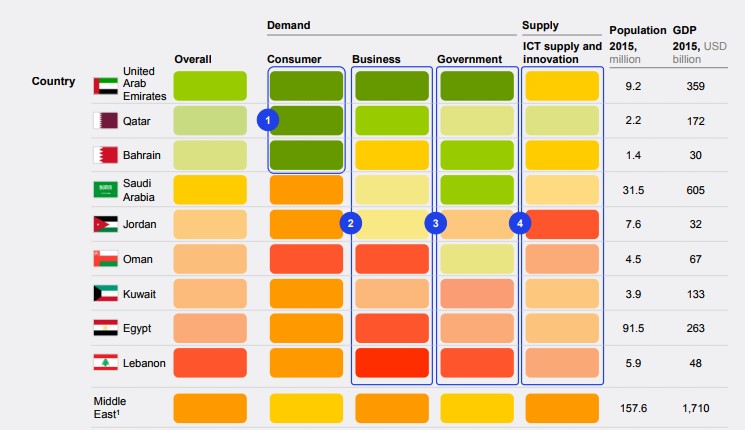 What makes UAE stand out from the rest of nations in the GCC region is the fact that the digitisation has been one of government’s major prerogative and not an afterthought. As part of UAE Vision 2021, the National Innovation Strategy identified digital technology as one of the top seven primary national sectors. This strategy focuses on the development of smart cities, software, and applications including advanced technology in areas of global interest such as artificial intelligence, semiconductors, nanotechnology, and 3D printing, as well as the quick adoption of technology across various industries.

UAE sees embracing digital as the way forward for providing increased job opportunities for its population. UAE’s population increased more than any other region in the world during the second half of 20th century. McKinsey estimates that the UAE captures close to 16.4% of the digital potential compared to 18% for the U.S; the UAE government is clearly focused on bridging and even surpassing that gap. Its Smart Dubai initiative encompasses projects that include Happiness Meter, Smart District, Dubai Data, Smart Dubai and Dubai Blockchain. UAE’s citizens have seamlessly adopted to new trends and technologies, for example UAE has one of the highest mobile phone penetration rates at close to 70 to 80% of the population, one of the highest globally. Social media usage is also widespread – WhatsApp and Facebook is used by 97% and 89% of the population respectively followed by YouTube at 73% making them one of the highest in the world.

Two of the UAE’s projects standout in its digital pursuit – the Dubai Open Data and Dubai Blockchain project.

Dubai Open Data
Data has transformed the way the world has moved in the past few years. Google, Facebook , Amazon etc. have all chalked up and used these data to create huge amount of values for the users as well as the company . Using Artificial Intelligence (AI), Google and Amazon have been able to spot trends that are not immediately obvious – such as the recording consumer buying patterns and suggesting new products based on the purchasing pattern. Governments have only been undertaking pilot projects when coming to Big data and AI in this aspect, UAE has been one of the pioneers in trying to utilize the data to transform the nation.

Dubai’s open data is one of the most ambitious project undertaken by the government of UAE. Estimates by KPMG states that by 2021, open and shared data has the potential to add USD 2.8Bn to the economy every year in terms of Gross Value Added. This estimate includes the impact of publishing and sharing both private and government sector data. That’s an additional USD 1,080 per person added to the economy.

The big value drivers of impact for Dubai are the transport, storage and communication sector; the public administration sector; wholesale, retail trade, restaurants and hotels sector; and the real estate sector. Opening up the data in these sectors would be a great value addition. These four sectors account for approximately three-quarters of the estimated potential GVA impact of open data in Dubai. Opening up the government data alone will result in an added value of in the range of USD 1.1 to 1.7Bn annually as of 2021. This is equivalent to approximately 0.8% to 1.2% of Dubai’s forecasted GDP for 2021, a significant addition. The high level estimates set out above provide an indication of the potential overall impact at the aggregate Dubai economy level.

One of the most important parts of the Dubai Data Initiative is Dubai Pulse, the centralized platform which will host all of Dubai’s data. The platform, announced earlier this year, is a single repository and platform for all data from government and private sector sources. The platform is intended for all users, from government personnel through to academics, and start-ups to access the data. Data in Pulse is organised into three layers of free open data, analytics for academic, professional, commercial, and economic purposes which will be available for a fee, and a third layer of data which will be available only to Dubai government entities.

Dubai Block Chain Strategy
Blockchain is a distributed ledger system that relies on a decentralized data validation and secured using cryptography. Banks have shown tremendous interest in developing and adopting the blockchain within their systems seeing the obvious benefits of the technology. While currently the most popular usage of block chain has been related to the digital currency “Bitcoin” but the idea has been adopted by a number of other developers to develop private block chain which could be used in other areas as well.

The Dubai Blockchain strategy is another pioneering project from the government of Dubai to digitize the government archives. Dubai has been targeting to use the digital ledger to efficiently share and track information related to contracts and transactions, the records of which are permanent, verifiable and secure. With most of the government records currently being done through paper, it takes a lot of time and money to process, store and retrieve them. In addition to this, it also affects the government efficiency.

Under this blockchain strategy the government plans to reduce the documentation required for visa applications, bill payments and license renewals, which account for over 100 million documents each year. Real estate has been the first department to go ahead with the implementation of the plan. It would allow investors residing in Dubai and abroad to verify property data which would be backed by a timestamp. Real estate transactions in Dubai have a huge load of paperwork that is needed to scrutinize before the purchase could be made. Block chain allows for enhanced data accuracy, credibility of transactions and transparency in the market. In October, the Dubai Land Department (DLD) announced that it was developing a system that would record all of the local real estate contract on a blockchain.

Leasing is another part of the problem that is being addressed through this shift to a block chain model. Renters would be able to link up landlords as well as utilities such as electrical, water and telecommunications. Most of the transactions currently takes place through checks and this project aims to help the renters pay them through electronic channels. In order to help achieve this goal, the Dubai legal department has tied up with Asset Management Group, Emirates NBD, IKEA and Emirates Identity Authority.

Given that UAE has one of the most important event, the Expo 2020, coming up, successful adoption and implementation of the above projects would help the showcase the technical prowess of the UAE in a very positive light. Both of these projects could help start a more open approach to sharing data and adopting new technologies by governments globally. Perhaps it might even help shackle the image that government sector are the ones that are most afraid of change and are bloated with bureaucracy. On successful adoption these projects has the potential to even serve as benchmarks for other cities which is planning to build a city of its own with technology built right in the foundation.