The relationship between oil price and dollar value is intriguing not only to the US and the oil-exporters, but to researchers and governments all over the world. Most commodities, including oil tend to be negatively correlated with the US dollar as most commodities are traded in dollar. The magnitude of the impact of dollar on oil and vice versa and its short term and long term impact on the economy provide interesting insights about the widely studied relationship between the most widely used currency and most widely used and traded commodity in the world.

Research literature has mostly found the causal relationship to be triggered by the changes in oil price on the US dollar. Few studies also indicate that a depreciating dollar may have positive impact on oil price.

As per an empirical study conducted by the Federal bank of New York, increasing oil prices lead to depreciating dollar both in the short and long run. Higher oil prices generate better revenue for the oil producing countries. Most of these countries were found recycling the petrodollars by investing back in the US, which led to the appreciation of US Dollar. The major oil exporting economies in the past 2 decades started to invest in instruments denominated in currencies other than dollar investments to protect them from shocks in the US economy and the risks of the US Dollar. The change in savings pattern of the oil exporting countries further added to the pressure on dollar.

Oil price has impacted the value of dollar differently in various instances in the past. The major oil shocks in the past and its impact on dollar provide interesting ideas about the puzzling relationship between the oil price and dollar value.

Major Oil shocks in the past and its impact

October War (1973):
The October war caused the oil price to increase from USD 3/barrel to USD 12/barrel during 1973 – 1974. Increasing oil prices and low growth caused stagflation in most western economies during the same period. The US dollar initially depreciated in 1973 and rose steadily in the second half of 1973 and 1974 due to increasing demand for USD. During this oil crisis, oil price and US dollar were positively correlated.

Iranian Crisis (1979):
The Iranian crisis caused a massive impact on the oil exports as the production in both the countries came to a grinding halt. The oil price jumped to USD 35/barrel in 1980 from USD 15/barrel in 1978. Dollar appreciated by a low margin during the period indicating a moderately positive correlation between the oil price and dollar.

Gulf war (1990):
Though the gulf war lasted for shorter duration compared to the earlier crisis, the oil price climbed up by almost 166% to USD 40/barrel. During the gulf war, one of the largest producers of oil in the region, Kuwait, faced invasion due to which oil production was affected. US dollar depreciated during the gulf war when the oil price was increasing. Unlike the past, dollar was negatively correlated with the oil price in 1990. 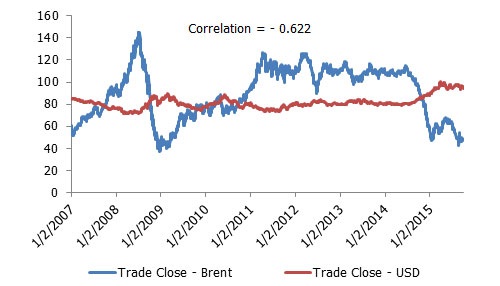 The oil price spiked in 2007 and 2008 reaching its peak at USD 147/barrel in 2008 during which the US dollar depreciated. The financial crisis in 2008-2009 slowed down the industrial activity in many countries leading to declined demand for oil. Oil price declined sharply and US Dollar reverted by appreciating. The position reversed from 2011 till H1 2014, when the oil price increased steadily mainly due to the demand from the emerging markets and US dollar depreciated. The oil prices declined after August 2014 due to shale exploration and US dollar appreciated during the same period. Analysis of oil price and USD between 2007 and 2015 indicated a strong negative correlation between the two. The correlation coefficient between oil and US Dollar during 2007 and 2015 was -0.622.

Statistical analysis done by many researchers in US and oil importing countries indicates that dollar depreciation, on the other hand has caused increase in oil prices within a week. The impact of declining dollar can be evidenced in the oil price in the long run as well. Oil is widely traded and most of the importers pay in dollars for their imports. Dollar depreciation makes oil less expensive for its consumers causing a sudden spike in the demand. The increased demand for oil worldwide leads to higher oil prices. Oil price increased by almost 2.5 times during 2003-2007 as the US dollar was depreciating against major currencies like Yen and Euro. During 2006-2008, oil price increased by 46% in dollar terms and only by 17% in Euro terms.

The relationship between increasing oil price and depreciating dollar and vice versa has been evident from empirical evidences as well as past events such as gulf war and global financial crisis. The dollar valuation is dependent on other factors apart from the price of oil. Duration of the higher oil prices, the fundamentals in the global and US economy are other factors affect the dollar. In case of a temporary rise in oil prices, the impact on US dollar is expected to be low. For longer higher oil price regime, the economic situation needs to be taken into consideration before determining the correlation. If robust fundamentals prevail in the US and the emerging markets, then US dollar may appreciate and can be positively correlated with oil price. In case of weak fundamentals, the anticipation of recession or the actual onset of the recession will lead to depreciating dollar resulting in negative correlation as evident after 1990.