For long, Kuwait’s fiscal breakeven oil price remained low and it had been a key strength for the economy. However, the situation is fast changing. 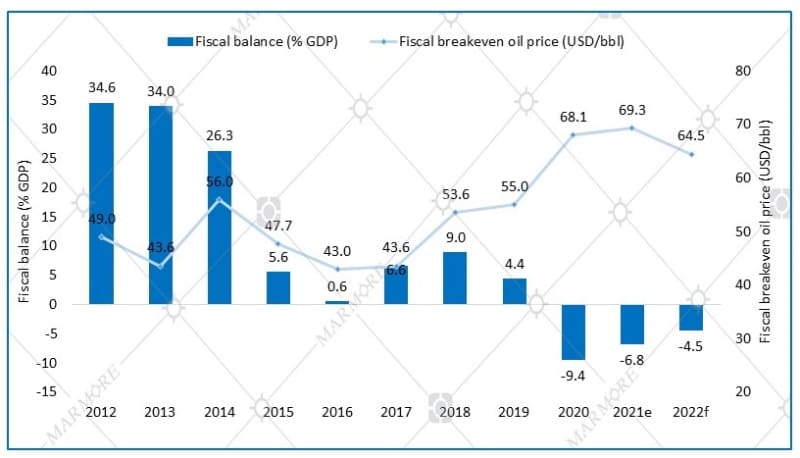 Kuwait’s fiscal breakeven oil price (FBEP) that had been hovering below USD 50/bbl has steadily increased in the recent years, reaching USD 68.1/barrel in 2020, nearly a 24% increase relative to 2019. When compared to its GCC counterparts, UAE’s FBEP increased by 10.5% whereas Saudi Arabia and Qatar witnessed a fall in their breakeven price of 7.5% and 5.0%, respectively for the same period.

Further, according to the IMF estimates, UAE, Saudi Arabia and Qatar are set to see a drop in their breakeven prices in 2021 as compared to Kuwait, which is expected to witness a further increase in the breakeven price by roughly 2%.

In 2020, governments around the world experienced fiscal deficits due to expansionary fiscal policies to support economic trough coupled with slumping government revenues especially for oil exporting nations with oil prices bottoming on the back of disrupted global operations and weak demand.

Kuwait’s high dependency on oil is underscored with hydrocarbon revenues accounting for about 90% of total revenues (excludes investment income). The impact of oil price cyclicality on Kuwait’s fiscal balance is evident from the recent oil boom-bust cycle. Kuwait’s budget for the year ending 2021 marked the highest fiscal deficit the country has ever witnessed, KD 10.8billion, a 175% increase relative to the previous year. The expenditure pattern for Kuwait remains rigid with salaries and subsides accounting for 73% of total expenditure, while growth inducing capital expenditures accounted for a mere 9%.

OPEC+ has capped the oil production for its members until 2022, consequentially also capping the government revenue for Kuwait. With the rigidities in expenditure persisting and a cap on oil production, the government expects the fiscal deficit to deepen to KD 12.1 billion for the year ending 2022.

Despite positive outlook for oil prices with the global economic recovery, there is a need for urgent reforms in the Kuwait economy, to put its finances on a more sustainable footing, as monetary tools are not sufficient to address structural challenges, as noted recently by the Kuwait central bank.