Saudi Arabia recently registered the cheapest price bid to supply solar electricity ever recorded. Abu Dhabi’s Masdar and Electricite de France SA bid to supply power from a 300-megawatt photovoltaic (PV) plant for as cheap as 1.79 cents a kilowatt hour. If the project is successfully awarded by the Ministry of Renewable Energy Project Development, it would top the leader board beating the previous record for a solar project in Abu Dhabi for 2.42 cents a kilowatt-hour. It is a milestone in Saudi Arabia’s nascent solar program and a landmark start of a USD 50 billion program to diversify domestic energy supplies away from fossil fuels. 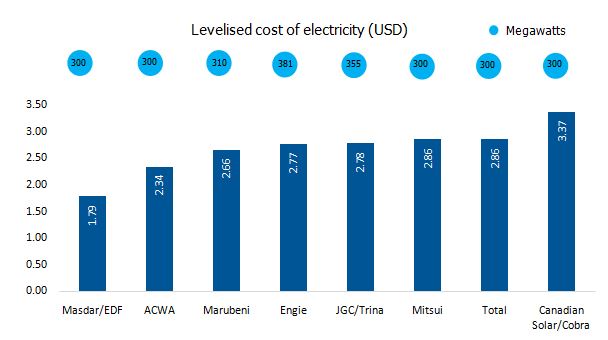 Saudi Arabia is among the leading Middle Eastern oil producers looking to renewables to feed growing domestic consumption that’s soaking up crude which it could profitably export to generate higher revenues. The plant in Sakaka will be the first project awarded under the renewables program, which targets 9,500 megawatts of electricity generation capacity using solar and wind by 2030( Bloomberg). The project is set to start producing power by June 2019.

Prices for new solar power projects have fallen so rapidly that the cheapest price of previous year has become the ceiling price for the current year. The prices have reduced by as much as 78% since 2013. A combination of improving and less costly technology, free land earmarked for the plants, connections to the national power grid and favourable financing have helped to significantly reduce the costs. Developers are also expected to benefit from the economies of scale due to the large sized projects. The already-plummeting costs of installing solar power could fall by further 60 percent over the next decade(IRENA).

Current power generation scenario
Saudi Arabia generated 330.5 billion kilowatt-hours (kWh) of electricity from installed capacity of 66 GW in 2016(EIA). It faces a sharply rising demand driven by population growth, a rapidly expanding industrial sector led by the development of petrochemical cities and high demand for air conditioning during the summer months. Total generating capacity is expected to be over 120 GW by 2032. 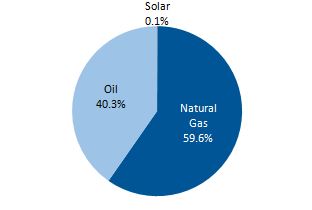 Saudi Arabia that gets less than 1 percent of its power from renewables currently, is targeting 60 projects in renewable energy program with investments estimated between USD 30 billion and USD 50 billion by 2030(Reuters). The expansion into renewables will substitute the usage of 18 million barrels of oil equivalent for electricity generation by 2020.

Saudi Arabia’s renewable energy program is part of a broader project to wean the economy from its reliance on oil exports. The kingdom is restructuring its energy sector as part of Vision 2030 and a focus on renewable projects is a pillar of this transformation. Saudi Arabia is an ideal location for both Concentrated Solar Power (CSP) and PV power generation as it has remarkably high solar radiation of around 2,550 kWh/m2 per year, which is almost double the average radiation in European countries. There is also the availability of vast areas of empty desert that can host solar installations. Additionally, Saudi Arabia has huge deposits of the type of clear sand that can potentially be used in the manufacture of silicon PV cells.

However, some barriers may exist such as large reserves of oil with relatively low cost compared to solar energy. Saudi Arabia also currently lack any demand-side policies to stimulate the private sector. These include tax benefits or feed-in tariffs for renewable electricity generation. In addition, the dust effect, which can reduce solar energy by up to 10–20 % can be a major hindrance and will require solar energy technology to be adapted for desert conditions to enable more efficient harnessing of the energy.

Still, the percentage of renewable energy is estimated to reach 10 percent of total installed capacity in Saudi Arabia by 2023. Further, The King Abdullah City for Atomic and Renewable Energy (KACARE) is targeting for 41 GW of solar power, 17.6 GW of nuclear power, and 9 GW of wind power by 2032(KACARE). The fact that Saudi Arabia, an ardent booster of fossil fuels, has found compelling economic reasons to bet on solar is one of the clearest signs yet that solar has become a cost-effective source of power.