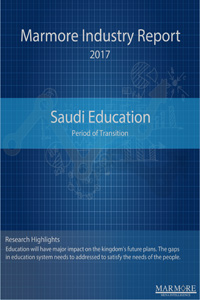 What is this report about?
The Kingdom of Saudi Arabia is looking to diversify the source of revenues away from oil. Despite all its plans, a strong education system to support its vision would be essential for its success. Public expenditure on Education in Saudi Arabia is expected to be around 7.6% of nominal GDP in near future. Based on our estimates, the total market-size of KSA education market by spending is estimated at USD 67 Bn in 2016. The formal education system in Saudi Arabia is similar to overall GCC education structure and can be divided into three broad levels: primary, secondary and tertiary. Primary and Secondary education together lasts for 12 years and tertiary education can last upto 9 years. Educational institutions in KSA can be public or private. Private Schools can be divided based on the types of curriculum such as Arabic, bilingual, Asian or Western schools.

Who will benefit and why?
The report will benefit anyone tracking the Saudi education industry, and its many players; especially schools, foreign education institutes, regulators and government agencies, investment bankers and policy makers. This report would help these entities to gain in-depth understanding about the industry.

How exhaustive is this report?
We have analyzed the education market in Saudi Arabia and how the demand for private schools have increased in Saudi Arabia due to increasing need for better quality of education and also due to a law passed in 2009 which allowed Saudi nationals to be enrolled in international schools. We also discuss the growing size of the education market in KSA will provide ample opportunities for private players at all levels. More specifically opportunities in higher education market which are vast. Private players will get benefitted from government support to private sector and growing preference for private educational institutes.