Investors look at various parameters to understand and evaluate a company’s attractiveness. One such item in the balance sheet is the level of cash that a company holds. If the cash balance has been consistently growing, it is generally considered to be a good indicator that the company is performing well and is therefore able to accumulate cash reserves on its balance sheet. However, it is essential to determine the cause behind growth in cash flow and reason for holding high cash balance before concluding whether it is good or bad for the company and its shareholders.

In our report GCC Listed Companies with high cash holding – what can one learn we evaluated GCC’s cash leaders i.e., companies in GCC with very high levels of cash. We identified various sources/reasons that caused them to be the cash leaders and explored if there is a link between high cash holding and shareholder returns.

For instance, Qatar Fuel Company, which has the highest cash balance in proportion to its total assets, has spent cash on investment activities over the last five years. Etisalat, the largest telecom player in UAE and second largest in GCC by market cap, had the highest cash to assets ratio among GCC telecom players on average. Its high cash balance particularly in 2018 was due to lower cash outflow as a result of lower term deposits (with maturity of over 3 months) as compared to previous year and proceeds from sale of subsidiary and associates. Slowdown in real estate sector in Dubai in past couple of years affected the cash balance of real estate companies. Both Emaar and Aldar properties have registered a decline in cash balance of 63% and 44% respectively as of Jun-2019 compared to 2017 levels. Aldar properties in particular saw a decline in their profitability during this period. However, they still make it to the top 10 in our analysis.

GCC companies with high cash holdings as % of assets 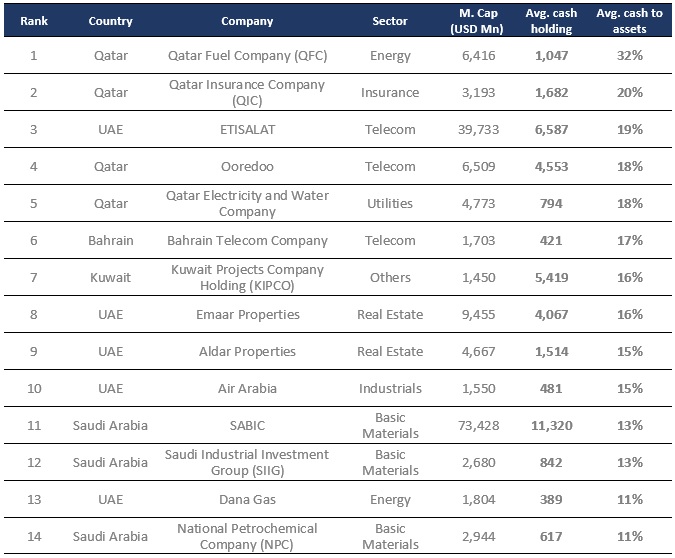 All the companies in our coveted list have a much higher cash holdings as compared to their respective sectoral average. Majority of the companies have yielded either negative or low positive returns to the shareholders (for more details refer our report). Few exceptions were Etisalat and Dana gas that have yielded high returns to the shareholders. One of the reason behind the surge in the stock price of Etisalat was due to synergies from the acquisition of 53% stake in Maroc Telecom (~USD 5.7bn) in cash in 2014, which was one of the largest cross border deals in the region. Further, during the year 2015, Etisalat was one of the constituents that was included in the MSCI index upon UAE’s EM upgradation. The share price of Etisalat surged by 61.7% in 2015 alone.

In the aftermath of financial crisis followed by recent oil price crisis, the importance of holding liquid assets have been growing across globe and even more so in GCC region which has significant exposure to oil prices. However as holding cash has opportunity cost associated; in case of dearth of attractive investment opportunities companies have other alternatives to utilize their cash balance. Investors generally look for stocks that pay dividends and companies that share excess cash with shareholders in the form of dividends are likely to experience better share prices as compared to non-dividend paying stocks. Holding cash over and above the desired levels may ultimately be perceived as inefficient utilization of resources and therefore companies with high level of cash holdings for long periods may underperform compared to their potential intrinsic value when cash is well utilized.