December 30, 2015
In the GCC, private equity is still at a nascent stage, but had witnessed significant growth between 2002 and 2008. But the onset of global financial crisis stalled growth of the industry. Fundraising had become anemic, despite the sizeable amount of dry powder accumulated over the boom years, and deals had stalled as acquisition finance became expensive and difficult to obtain.
Most PE funds in the GCC region have broad sector focus with investments ranging from healthcare to ICT, infrastructure and hard assets like real estate. Analysis reveals there is a strong focus on consumer spending themes such as restaurants, consumer goods, retail, ICT, leisure and entertainment sectors; and governments focused investments play such as infrastructure, education, healthcare etc. Given the deal scarcity and capital abundance, many of the funds that were launched earlier as specialized or sector-focused funds six years ago have rolled back their decision and broadened their mandate to become more opportunistic. 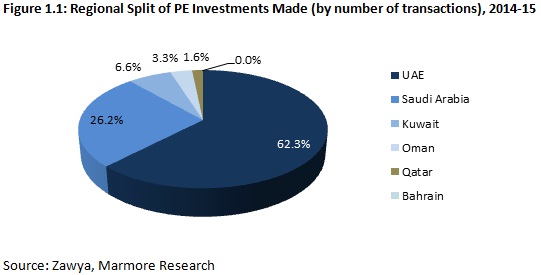 In comparison to other GCC markets, UAE is a predominant financial hub and acts as a gateway for entry into the Middle East region. Most PE funds are attracted to the relatively hassle free regulatory regime in the UAE, a consequence of the efforts made by the country to attract foreign investments. Continued government spending and increased focus on the non-oil sector are expected to drive PE growth in the coming years. With the Dubai Expo 2020 and the FIFA World Cup in Qatar looming ahead, the non-oil sector comprising infrastructure, tourism, trade and financial services is expected to get a major boost, which opens up avenues for investment for PE. But PE funds are likely to be confronted with intense competition, not only with fundraising, but also in scouting attractive deals.
State owned enterprises which constitute most of the economic activity in GCC region are rarely privatized. Even under the privatization initiative, only minority stakes in these enterprises are floated in the stock exchange, which usually is reserved for and subscribed by the nationals. Apart from the state enterprises, family owned business form the majority of companies in the GCC region. Family business houses are wealthy, well-established and are often reluctant to sell their stakes to private equity firms.
Islamic PE is constrained by lesser investment opportunities as only Sharia compliant projects are sought after by these funds. Lack of uniformity in the way sharia principles are applied in different countries, due to absence of global sharia standards, leads to multiple regulatory checks and at times can lead to prolonged delays in structuring and increase costs dramatically. Dearth of qualified, trained professionals with expertise in investment strategies, legal documentation and well versed with sharia standards is a huge deterrent to the development of Islamic finance in general and Islamic private equity in particular.
The nascent legal and regulatory framework in GCC countries, characterized by stringent ownership restrictions, weak bankruptcy laws and high set-up costs, dampen investor enthusiasm. But the recent entry of UAE and Qatar into the MSCI Emerging Markets index has led to many market reforms across the region, especially in Saudi Arabia, aimed at improving disclosures and standardizing corporate governance.
Emergence of private equity would be a boon for most SMEs and startup companies, which find it hard to obtain adequate financing from banks due to stringent collateral requirements, including personal guarantees. With nearly 80 per cent of the companies in the space falling in the SME category, private equity can emerge as an alternative funding method.