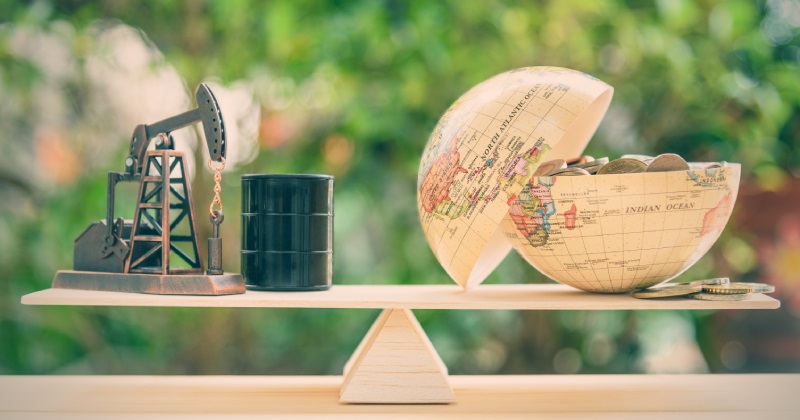 Average crude oil prices have trended upwards for four consecutive months in 2019. The perception of oil risk due to factors like increasing geopolitical tensions triggered by the drone attack on Saudi oil vessels, the end of waivers for US sanctions on Iranian crude exports, unrest in Venezuela and sustained production cuts from OPEC may have all contributed to these higher oil prices. U.S. Energy Information Administration (EIA) reported that Venezuela’s oil output fell to 830,000 barrels per day (bpd) in April, down 10,000 bpd from March and a 700,000 bpd decline from April 2018. Iranian crude oil production averaged 2.3 million bpd in April, down 300,000 bpd from March.

Impact of Sanctions on Iran and Venezuela on OPEC production figures (Million Bpd): 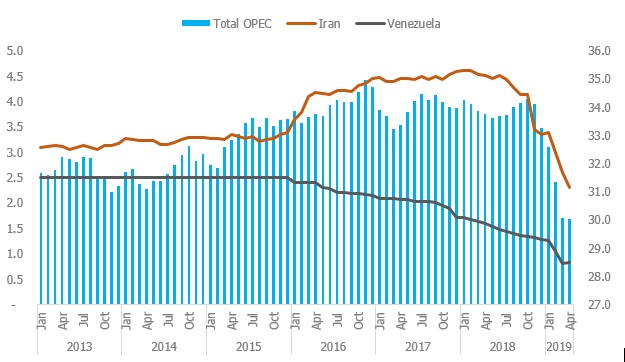 On the other hand, the trade war between the two largest economies in the world has introduced demand concerns affecting market sentiments contributing to a downward pressure on oil prices. US President Donald Trump raised tariffs on USD 200Bn worth of Chinese commodities from 10% to 25% and China has retaliated with its own tariffs on USD 60Bn US goods as high as 25%, from the original 10%. The trade war has increased fears of a slowdown in global demand for liquid fuels consumption as US and China together accounted for 34% of global oil consumption as of 2018. 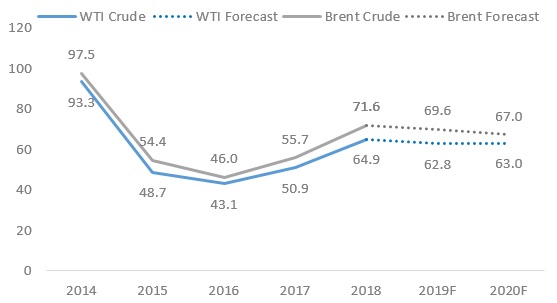 Furthermore, EIA predicted, in its short-term energy outlook, that these higher prices would incentivize US to boost production forecasting US oil production to average 12.45 million bpd in 2019 and 13.38 million bpd in 2020, up 150,000 bpd and 350,000 bpd from its April forecasts.  US is expected to become a net exporter of crude oil by the end of 2019.

The trade war has greatly reduced shipments of U.S. crude to China, and it is unlikely that Chinese buyers will sign long-term offtake agreements with U.S. crude exporters as long as trade uncertainties continue (Source). In the first half of 2018, China was the third largest importer of U.S. crude, averaging 567 thousand bpd. In the six months ended February, the most recent data available, it has dropped to the fourteenth spot, importing an average of just 129 thousand bpd. US crude oil inventory has been on the rise and if demand from China remains depressed, the market could witness further rise in inventory levels, which might lead to production cuts by the oil companies to keep prices afloat. 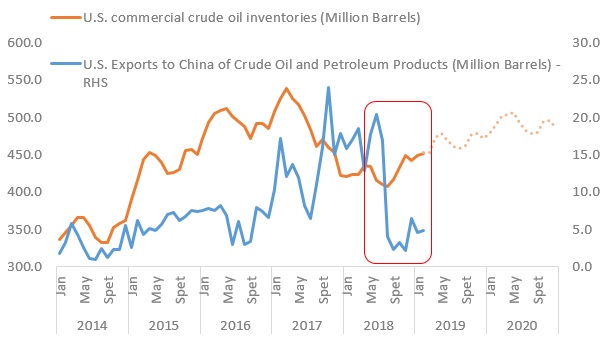 Several external factors have also contributed to the volatility in oil prices in the recent past. The contamination in Russia’s Druzhba oil pipeline, which boasts a carrying capacity of 1 million bpd, and is a key channel for crude into Eastern Europe and Germany, has hit Russian oil exports. Furthermore, Saudi Arabia halted its main cross-country East-West oil pipeline temporarily after a drone attack damaged pumping stations along the link. The pipeline, which bypasses the Strait of Hormuz, has a capacity to carry 5 million bpd of crude acting as a strategic transporter of oil for the region. A week prior to the attack in Saudi Arabia, UAE’s strategic port of Fujairah witnessed an attack on several oil tankers disrupting trade in the region. Iran has been blamed by Saudi Arabia and UAE for both of these incidents leading to further escalation of political tensions and an upward pressure in oil prices. Oil prices found additional support after tensions escalated when US Maritime Administration reported that US commercial ships including oil tankers sailing through key Middle East waterways could be targeted by Iran, in retaliation of which US sent an aircraft carrier and a bomber taskforce to the region.

With the price of Brent crude hovering in the range of USD 70-75 per barrel in May, Russia might press for a relaxation of the ongoing output restraint in its upcoming OPEC meeting in June. However, with rising US inventories and uncertainty over future demand for oil in the face of the ongoing US-China trade war, Saudi Arabia might extend the deal yet again leading to a potential conflict of interest between the de-facto leaders of the OPEC plus group.

US-China trade war worries are expected to continue to keep a downward pressure on oil prices. EIA expects some tightness in global oil markets during the second and third quarters of 2019, but anticipates that growing production in the United States and key OPEC countries will ensure that global supplies continue to meet demand moving forward. Increased crude oil production in Saudi Arabia, United Arab Emirates, Kuwait, and Russia are likely to backfill the lower Iranian production, though the decision of increasing production will be clear after the OPEC June meeting.