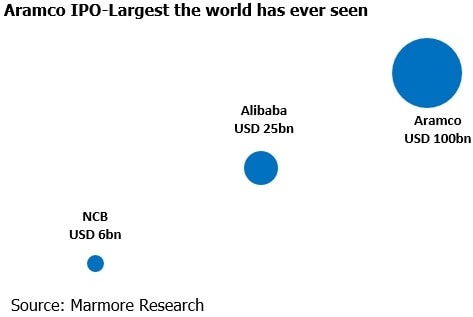 The market capitalization of the Saudi Arabian stock market is currently around USD 400bn and the IPO of Aramco could add further USD 100bn to the market capitalization (Financial Times). Inclusion of Saudi Aramco in energy sector would increase its weightage from the current value of 21.1% to 36.8% in the Tadawul index pushing the dominant financial services sector from the top spot. We believe the revised weightage where petrochemicals/energy sector dominates the index rather than the financial sector is a better representation of the underlying economic structure of Saudi Arabia. 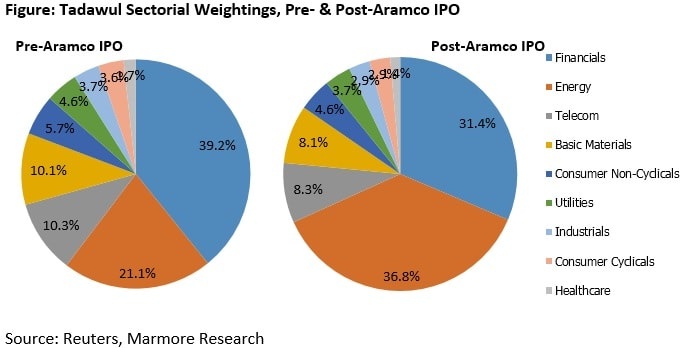 The GCC region has abundant liquidity as evidenced during the recent IPO of National Commercial Bank (NCB) (region’s largest) which raised USD 5.9bn in 2014. The IPO was heavily oversubscribed as retail investors placed orders worth more than 23 times the shares that Saudi Arabia’s biggest bank by assets offered for sale. About 1.25 million people placed orders which cumulatively were worth USD 82.9bn for the retail portion of the offering (The wall street Journal). Thus, the Aramco issue could be listed in Tadawul exchange but it would exert tremendous pressure on the market liquidity in the days preceding the listing as potential investors would reduce their stakes in other holdings and save their money, to subscribe to this issue. Further, the stock regulator could accelerate reforms which could pave for inclusion of Tadawul index into MSCI indices. This could boost the market liquidity and increase investor participation ahead of the IPO sale and ensure its successful listing.

Further, one may consider dual-listing of Aramco in well-established stock exchanges such as New York or London apart from the domestic market. Though international listing could boost the confidence of investors and draw greater demand and investor attention for the offer it could entail enhanced disclosures of information and financials, which Saudi Arabia may be hesitant about.

China is vouching for dual listing of Aramco that would put the government-owned oil giant’s shares on both the Hong Kong and Saudi exchanges in return for anchor investments from the Chinese funds. Hong Kong exchange had IPOs worth USD 34bn last year surpassing USD 30bn raised by IPOs in U.S, and therefore winning the mandate could boost Hong Kong stature further. Moreover, 16% of Chinese oil imports are from Saudi Arabia; establishing a stake in Aramco could further increase the synergies between China and Saudi Arabia.

Alternatively, an Exchange Traded Fund (ETF) could be setup and allowed for trading wherein the underlying asset is Saudi Aramco. This has the advantage of not ceding ownership and provides only the right to ownership over Aramco assets.

Listing of Aramco would be a landmark event not just for Saudi Arabia but for the global capital markets. Successful listing could pave way for trimming of government stakes in other large private entities. Considering liquidity pressures which the offer might experience in case of listing in the domestic market, it might be wise to consider other options which include dual listing. This will also boost the confidence of the foreign investors on the Saudi Arabian companies which might pave way for future listings of Saudi companies abroad.