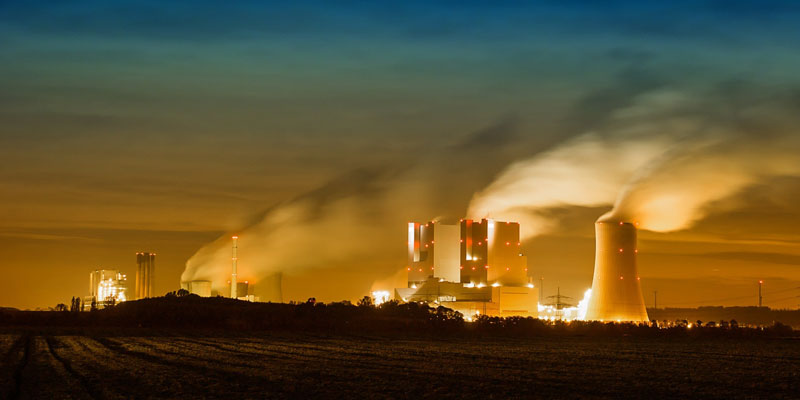 For several decades, gas sector has been on the backseat largely overshadowed by oil, which commanded a larger market compared to the aggregate of all the other commodity markets.

Natural gas, the least polluting fossil fuel compared to its peers such as coal and oil is set for a major transformation. The commodity’s long-term demand is expected to soar in the coming years due to transition towards a low carbon future and growing usage of natural gas specifically in the Asia-Pacific region.

Within GCC, Saudi Arabia’s domestic gas consumption is growing around 5 percent annually and projected to rise to around 14 billion cubic feet per day by 2025(AGSIW). The GCC’s per capita gas demand is ranked among the highest in the world with Qatar in particular, ranked at fifth. The importance of gas in GCC is fueled by surging demand from the power generation sector, industrial development, and expanding economic activity in recent years. The rapid expansion of the region’s petrochemical sector has also led to a sharp increase in demand for gas as a feedstock. Gulf Arab states have increased their focus on new gas projects to meet rising demand, with Saudi Arabia, UAE and Oman pushing for ambitious development plans. However, the long lead times that is required to bring new gas production online will require much of the demand to be met by increasing imports of gas via pipeline or shipments of liquefied natural gas (LNG) in the short term.

Global Energy Consumption by source, 2040 (New policy scenario) (It takes account of broad policy commitments and plans that have been announced by countries, including national pledges to reduce greenhouse-gas emissions and plans to phase out fossil-energy subsidies.) 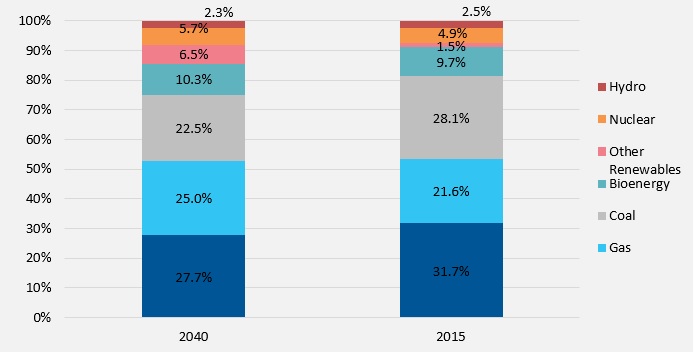 Out of total projected demand growth for gas, 80% of the growth is expected to come from developing economies, led by China, India and other countries in Asia. China and India alone are expected to account for half of the 30 per cent increase in global energy demand forecast by 2035 (BP). The concerns related to smog are on the rise and both countries have committed under the Paris climate accord. As a result, coal which still accounts for bulk of the electricity generation in China and India, at about 60 per cent, is expected to be gradually replaced by cleaner fuels such as natural gas and renewables. China, in particular, aims to increase the share of natural gas in its energy consumption basket from 6 per cent to 15 per cent by 2030. This is evident as Chinese Liquefied Natural Gas (LNG) imports increased nearly 38 per cent in 2017, compared with the same period in 2016 (Financial Times).

In resource-rich regions, such as Middle East, the case for expanding gas use is relatively straightforward, especially when it can substitute for oil. Among the GCC states, Qatar has the third largest gas reserves in the world. The focus of Qatar’s energy policy is the giant North Field which has recoverable reserves of more than 900 trillion standard cubic feet and a production capacity of 77 million tons per year. Saudi Arabia’s production growth is predominantly driven by the Wasit gas program while the next major project is planned to come online in 2019-20 is the Fadhili gas facility. The UAE is taking a multipronged approach to meet rising demand for gas, with plans to expand domestic production, increase use of renewables and reduce the share of gas in power generation and invest further in LNG import facilities. Oman’s gas industry is set to expand significantly in the medium term as it targets an increase in exports from its LNG complex at Qalhat. Oman has more than doubled its gas production over the past decade and has advanced plans to increase capacity to 165 million cubic meters per day by 2020.

In terms of pre-development resources awaiting investment decisions, natural gas outweighs oil by staggering 25 per cent (FT). The investments are part of a growing interest in gas, as the general belief is that the clean characteristics of natural gas would allow it to keep growing substituting the consumption of other fossil fuels i.e. oil and coal over time.

In addition to seeking a bigger role in electricity generation, gas producers also see growth in the industrials, chemicals and transport sectors. In ships, for example, LNG can be used as a cleaner alternative to heavy fuel oil as the maritime industry faces regulatory pressure to reduce emissions. Heavy transport by ships, trucks and buses can’t be electrified and the better low-carbon alternative would be to adopt using LNG as a fuel.

The U.S has also become a net exporter of natural gas in 2017 for the first time since 1957. Additionally, numerous LNG terminals are being brought online and U.S is likely to be vying with Australia and Qatar to be the biggest exporter of LNG by 2022 (EIA).

Irrespective of the growing demand from China, prevailing low prices of natural gas compared to about a decade ago have so far failed to stimulate an extensive growth in gas demand globally. Consumption growth rate of gas instead has slowed down to about 1.4 per cent annually since 2010 from an average of 3 per cent annually during the decade till 2010.

There are two main factors that are restricting the demand growth for natural gas. Firstly, the shift in focus towards alternatives had led to rapid expansion in capacity and consumption of renewable power. The rising wind and solar generation are pushing down the wholesale electricity prices. Second, production of electricity by burning coal still remains much cheaper than generating electricity using gas.

Gas is viewed by many as a bridging fuel between the era of hydrocarbons and renewables in the industry. The major risk arising from the advancement in battery technology that enables excess storage of wind and solar power for future use could mean a scenario wherein world bypasses the transition phase of gas becoming the main source of fuel and directly jump to a phase where renewables dominate the fuel mix.

Despite the hindrances, the demand growth for gas is expected to out-perform other fossil fuels in the near future. Going forward, as gas emits only half as much carbon dioxide in electricity generation as compared with coal, and at least 75 per cent less nitrogen oxide and other health-harming particles, gas could well prove to be the a potential ally in the fight against climate change.