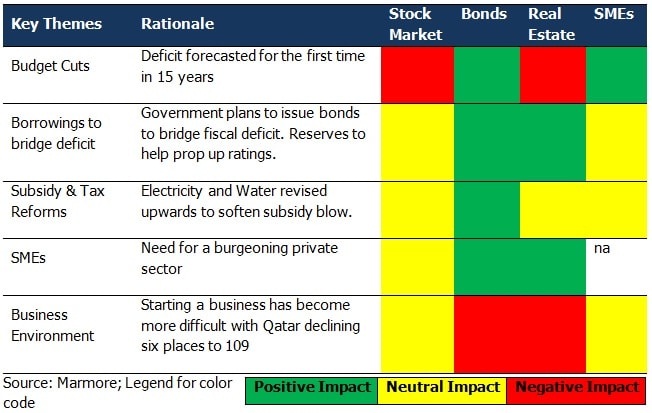 With the second lowest fiscal breakeven oil price (USD 57.8 per barrel) and the presence of ample fiscal reserves and buffer (172 per cent of GDP), Qatar is expected to withstand the current environment of low oil prices better than its regional peers. According to Marmore’s Qatar Economic Themes report,the country plans to spend USD 200bn on infrastructure as part of its 2030 development plan and this  has lured foreign contractors to what promised to be big profits, but project delays and problems with contracts and bureaucracy have left many in difficulties and their returns uncertain.

A new budget, which includes cut in expenditures in anticipation of the country’s first fiscal shortfall in 15years, was released on 16th December 2015. Expenditures are forecasted at USD 55.6bn next year, which is a 7.28 per cent decline from the last fiscal year, despite the increase in outlays on government salaries, wages and major projects – such as major transportation initiatives and preparations for the 2022 World Cup.

A massive drop in revenues caused by lower oil and gas prices is forecast to leave a deficit of USD 12.8bn in next year’s budget. To cover this financial shortfall, the country plans to borrow money rather than tap into the reserves held by the Qatar Investment Authority (USD 256bn), according to the Finance Ministry.

Qatar Investment Authority (QIA), estimated to be worth USD 256bn in assets as on June 2015, by the Sovereign Wealth Fund Institute (SWFI), had divested at least three stakes in recent months, the last of which was the October sale of USD 2.5bn shares in the UK-based BG Group. While the reasons for these divestments were not disclosed, it is believed to be linked to the state spending on mega-infrastructure works. More asset liquidations are likely to follow from the QIA's reported paper loss of USD 12bn on equity stakes in Glencore, Agricultural Bank of China and Volkswagen, according to the Financial Times. 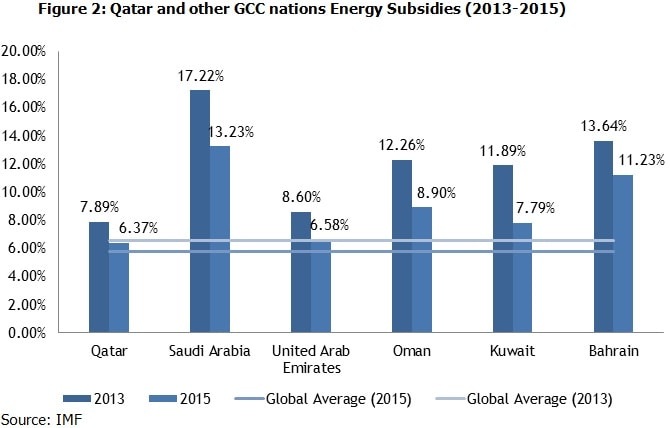 Qatar is one of the world’s largest consumers of water and electricity per capita and its use is increasing as its population increases. In 2014, the amount of electricity generated in Qatar jumped 11.6 percent to 38,693 gigawatt hours (GWh) . Roughly that is the amount of energy that can power 3.4 million homes for a year. Qatar has taken its 1st step in reforming energy consumption in the country with tariff hikes in Kharamaa.

Qatar has been pushing for the growth of SMEs as part of its Qatar National Vision plan 2030. SMEs have the capacity to provide jobs,  encourage innovation and diversification in an economy, bolstering the private sector and fostering entrepreneurialism.Qatar Development Bank (QDB), guarantees up to 85 percent of commercial loans, limited to QR15 million ($4.1 million), for SME projects, under its Al Dhameen program.