The past decade has witnessed a large amount of technological disruption that has changed the way we interact with the world. The payments universe is not averse to this disruption, with the usage of cash diminishing by the day. The world has begun the transition towards a more cashless society, with mobile devices, digital wallets and other forms of payments gaining preference among users. A cashless society is one where all the financial transactions take place through transfer of digital information instead of physical bank notes or coins. This transition has reached a substantial stage already in developed markets, but several emerging and low-income markets remain underpenetrated. Saudi Arabia remains at a much better position compared to other emerging markets. The journey of Saudi Arabia has gained momentum in the past three years with a strong push from the regulatory side. As the world gets accustomed to the realities of COVID-19 outbreak, it seems that the push towards a more cashless society just got much stronger.

The outbreak of COVID-19 prompted Saudi government to take stringent lockdown measures to contain the spread of the disease. These measures have led to stalling of economic activity, which has resulted in lower consumer spending during the period. Due to lockdown restrictions, cash withdrawals and point of sale (POS) transactions in the months of April have taken a dip compared to last year. However, with every crisis comes a silver lining. In the case of COVID-19, social distancing efforts are expected to create a temporary aversion towards making cash or contact payments, which would in turn be favourable for contactless forms of payments.

Saudi Arabia has taking huge strides in its transition towards a cashless society in recent years, supported by initiatives taken by the Government and the Central Bank. Regulations laid by the government that mandates employers to assign wages to their employees to their bank account has been a major step that has increased access to electronic modes of transaction to a large portion of Saudi Arabia’s population. Additionally, the initiatives taken to migrate payments during the Hajj and Umrah pilgrimages towards cashless forms could become a significant step that would, can be expected to shift substantial share of consumer payments away from cash in the coming years. The Saudi Arabian Monetary Authority (SAMA) introduced its own payment infrastructure in 2018, which aims to ensure the interoperability and standardisation of payment systems for both banks and fintech firms. It was followed by the establishment of a regulatory sandbox, which helps upcoming fintech companies and banks to develop, test and scale up payment technologies in a controlled environment. These initiatives have led to substantial improvement in moving towards cashless modes of payment. 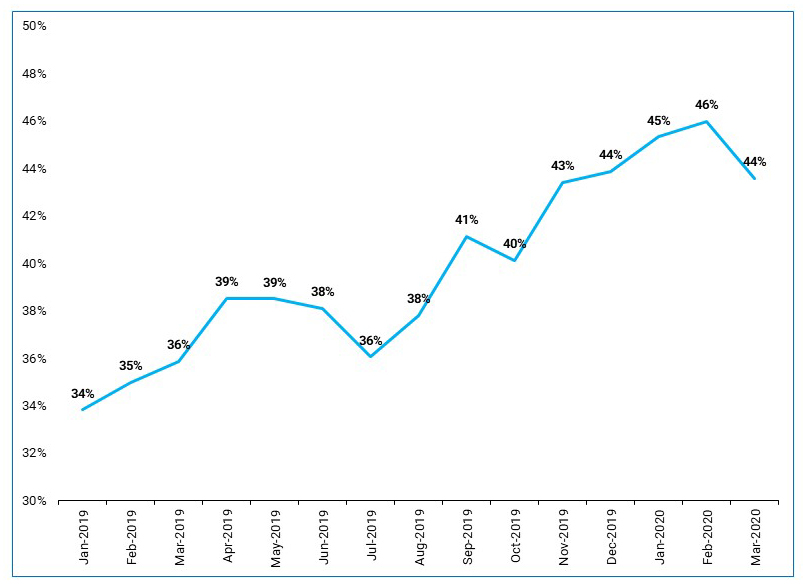 Considering the amount of ATM withdrawals as a proxy for cash spending and the amount of POS transactions as the proxy for cashless payments, the spending preferences in Saudi Arabia show a growing preference towards cashless payments. The ratio of POS transactions to ATM withdrawals has been improving over the years and stood at March 2019 at 36%. The same ratio for the month of March 2020 stood at 44%, indicating a shift towards more POS transactions. The ratio is expected to go up further as COVID-19 will only accelerate the transition towards contactless payments in the country. As per Saudi Vision 2030, the country aimed to increase the share of cashless payments to 28% by 2020 and to 70% by 2030. Saudi Arabia has thereby surpassed its objective for 2020 and looks on course to achieving its objectives for 2030.

Share of NFC in total POS transactions in Saudi Arabia 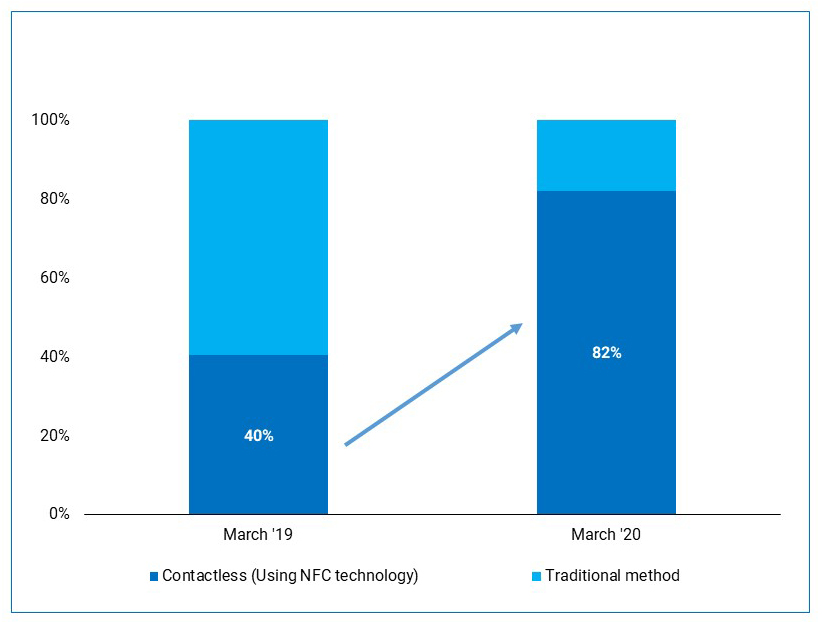 The usage of Near Field Communication (NFC) has also seen a sharp uptick in the past year. Customers are more comfortable in making contactless payments through NFC, that is enabled in their cards and mobiles. For instance, the total number of transactions that took place through mobiles and cards stood at 3% and 37% of total POS transactions respectively in March 2019. However, in a span of one year, the ratio shot up to 17% and 65% respectively. Contactless payments through NFC technology now account for approximately 85% of the total POS transactions in the country.

Saudi Arabia remains relatively well placed in the region to tackle the need for cashless payment infrastructure during times of lockdown due to its earlier initiatives. In the wake of COVID-19 outbreak, SAMA took additional measures pertinent to cashless transactions. The monthly transfer limit for e-wallets was raised from SAR 10,000 to SAR 20,000 to encourage consumers to use e-wallets to make payments. Non-bank financial institution digital wallet licenses have been issued to STCPay, HalalaH and BayanPay during 2020, with the latter two wallets spending successful time in SAMA’s sandbox. These measures would help the growth of digital wallets, which is a key form of contactless payment used worldwide. Other measures taken by SAMA during COVID-19 outbreak include the exemption of fees associated with interbank money transfer using Saudi Arabian Royal Interbank Express System and raising the limit of contactless bank card payments in POS terminals from SAR 100 to SAR 300.

Adoption of digital payment methods has seen significant progress in Saudi Arabia during recent years. Moving to a cashless society has benefits such as lower risk of financial crime, greater financial inclusion, and a more integrated economy. The ability to make faster and more secure payments will benefit both businesses and customers. The way forward for contactless payments look bright, as enforced social distancing measures will only accelerate the transition towards a cashless society. Consumers are expected to continue to stick to contactless modes of payment even after the effect of COVID-19 wanes away.