The Paris Climate Agreement and Implications for the GCC

December 23, 2015
The Paris climate change deal will only come into force after it is placed for signatures of approval (from 22 April 2016 to 21 April 2017) by States and regional economic integration organizations that are Parties to the Convention (The United Nations Framework Convention on Climate Change). It is notable that the agreement can only come into force if it has received ratification by 55 countries that represent at least 55% of global emissions. For France that hosted the climate change conference, the 21st session of the Conference of the Parties (COP21) ranked as the largest international diplomatic conference ever organized by the country.

The Paris agreement establishes a new international context for countries’ use of fossil fuels, including limiting worldwide temperature rise to well below the two degrees Celsius mark and undertaking efforts to constrain the rise to 1.5 degrees Celsius over the long term (The Scottish Government). The climate change agreement is a reflection of a collective thought, particularly emanating from the advanced nations, that is trying to move towards a post-hydrocarbon energy era. What does this mean for the GCC, whose predominant source of income is hydrocarbons? The following graphic illustrates the contribution of nonhydrocarbon revenue as a percentage of total revenue. 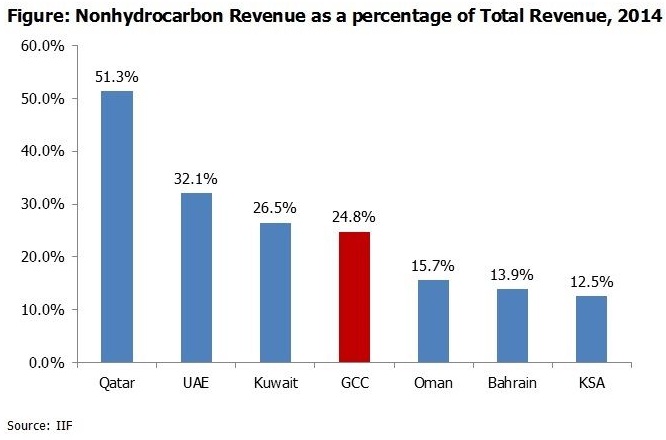 In November 2015, the International Monetary Fund (IMF) released estimates that the GCC’s export revenues would be nearly $275 billion lower in 2015, in comparison with the preceding year, due to the oil price decline since mid-2014. The shortfall in hydrocarbon revenues has caused concerns about fiscal deficits across the GCC. Analysts predict that GCC countries would raise at least $15 billion in the international bond markets in 2016, an amount that would range higher than all GCC sovereign dollar debt issuance from 2013 through 2015 (Zawya). The following graphic illustrates the year on year change in hydrocarbon revenue (growth or shrinkage) from 2012 through 2016(f).

There is also a concerted push towards renewable energies evident in the policies of various countries around the world. Global investment in renewable energy rose by 17% to touch $270 billion in 2014. Also, the green bonds market, which barely had a presence even until a decade ago, is now worth $66 billion. The market was worth just $2 billion in 2011, implying a CAGR of about 140% from 2011 through 2015. The GCC itself is participating proactively in developing a renewable energy future. However, the concern is that the renewable energies paradigm may emerge so quickly that the needed economic diversification efforts may not have sufficient time to bear fruit.

Meanwhile, the supply side of the oil equation is getting larger as well. On December 19, 2015, news emerged that the U.S. lifted a 40-year-old ban on export of American oil. Moreover, Iran, which anticipates removal of sanctions soon, has indicated that it would boost output by 500,000 barrels per day in a post-sanctions environment, which it expects sometime in early 2016. Thus, the oil glut appears to be getting wider by the day. 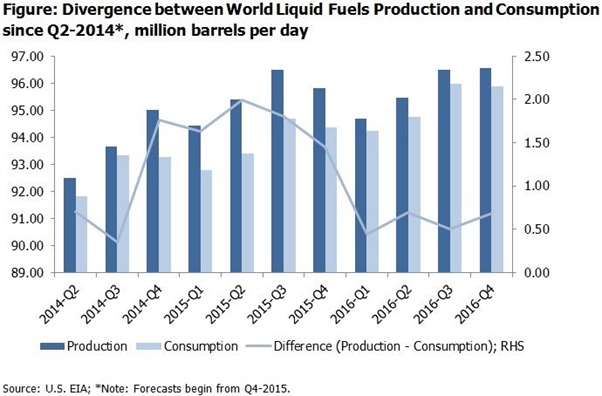 In conclusion, it can be said that if the GCC does not economically diversify and create new revenue sources, then the massive fiscal reserves too will come under immense stress over the long term. The Paris climate deal is one more reminder and catalyst for the urgent need for economic diversification in the GCC.