Waste to Energy in the GCC – Moving beyond the cost dynamics

Waste to Energy (WTE) provides an environmentally sustainable route for waste disposal while carrying the added benefit of producing clean energy. It is high time for the GCC countries to wake up and take note of their Solid Waste Management strategy as rapid urbanization has led to an increasing waste pile up year over year. Per capita waste generation in most GCC countries exceed the global average of 1.2 kg per day with Kuwait being the highest in the GCC with 5.7 kg per day.

Per Capita waste generation (in kg/person/day)

Despite these growing concerns, Waste to Energy has not taken off in the GCC yet with investments starting flow in only during the past few years. We analyze the reasons why the governments have taken so long to unearth WTE.

Globally, the value of WTE market is estimated to be USD 28 Billion and expected to reach USD 37 Billion by 2023. WTE technologies based on thermal energy conversion is widely preferred and accounted for approximately 88.2% of total market revenue. Europe is the largest and most sophisticated market for WTE technologies, accounting for 47.6% of the total market. Despite the increase in industrial waste, strict waste management legislation in the EU have been responsible for the growth in Europe’s WTE market.  In the case of other developing economies the key challenge has remained the large up-front cost for implementation and hence the option of low-cost landfilling is widely preferred. 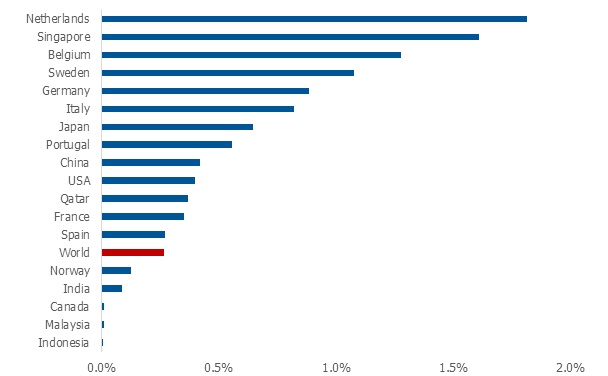 Secondly, when viewed from a financial angle, the investment required for WTE technology remains on the higher side. Qatar invested USD 1.7 Billion to complete the Domestic Solid Waste Management Centre. This is huge in comparison to other renewable/ environment friendly power generation technologies like solar. Solar PVs is witnessing a downward trend and in comparison the case looks weaker for WTE to be considered as an energy source.

However, a key dynamic which favors WTE is the limited land availability in the GCC. Excluding Saudi Arabia and Oman, the total land area available in the other countries is only 113,756 km2 which is three times lesser than the land area of Norway. But in comparison, Norway produces nearly 5 times lesser waste than the 4 countries combined showing the enormity of waste produced in relation to the land availability. Among GCC countries, waste produced by Bahrain and Kuwait are enormous when compared to their land availability. Bahrain and Kuwait produce 1060.9 kg/day/sq.km and 736.2 kg/day/sq. km respectively while their GCC counterparts, Saudi Arabia and Oman produce a mere 2.2 kg/day/sq. km and 5.9 kg/day/sq. km respectively.

Hence, landfill burial would not be a sustainable technique in the long run mainly for countries with limited land availability, especially when rapid urbanization is taking shape in the region and the city scape continues to grow.

Most of the GCC countries are cognizant of the situation and have taken initial steps towards waste management albeit still at a nascent stage. Only Qatar has thus far produced substantial amount of electricity from waste while other GCC countries continue to procrastinate this problem. Nevertheless, investments are beginning to flow in the past few years.

Waste to Energy projects in the GCC 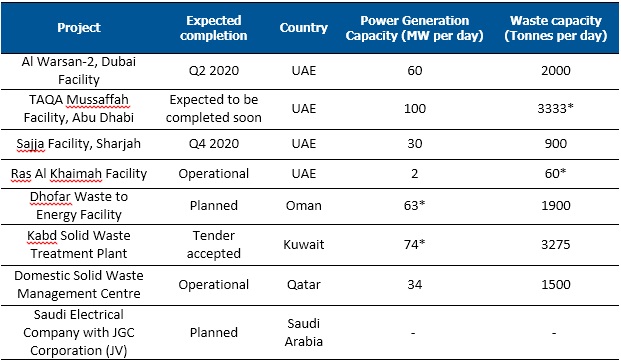 Waste disposal is a problem that has to be tackled with urgency. Leeching due to the landfill is highly hazardous and in most cases irreversible. Electronic and plastic waste is again a matter of deep and growing concern. Governments should take the initiative and involve private players to manage this issue and push the needle before time runs out. Providing subsidy, easy loans and strict regulations could be the measures taken. Investment in new technology and research should also be promoted by governments as pursued in the case of other non-conventional power generation mechanisms such as solar and wind. Countries should move beyond the cost dynamics of WTE and rather emphasize on the socio economic benefits to build on a better and sustainable future.