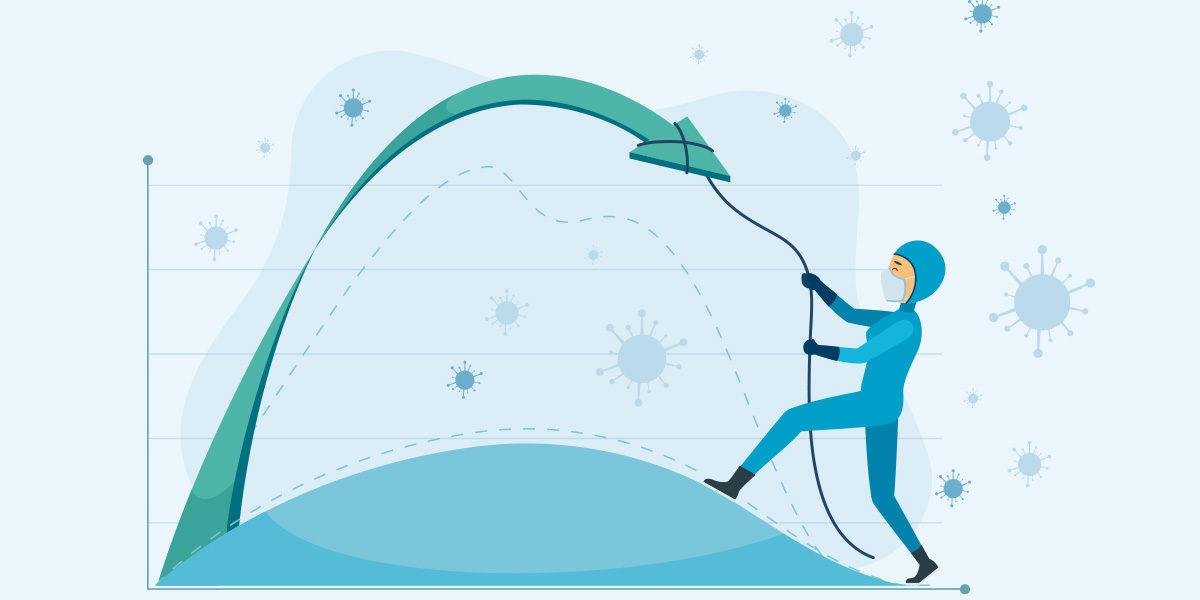 The outbreak of novel Coronavirus across the globe, which affected lives of millions of people continues to take its toll on the global economies. With more than 7-8 months into the crisis the virus is still omnipresent. It forced countries to adopt control measures like lockdown, curfew, social distancing, masks etc. As a result of which many countries have been successful in curbing the rate of spread and have also moved past the peak in terms of maximum confirmed cases reported.

How should one define peak?
Calculating the peak may become a very cumbersome task requiring statistical analysis, rather a look into the numbers alone could also help us understand the trends. The most important metric in this regard is the number of reported cases on a daily frequency. The cases reported usually follows a bell curve pattern, in which the count begins to increase to reach a peak before it begins to decline. It is also important to check if the recovery rates are improving, as a situation wherein recovery rate begins to drop could indicate that a possibility of a resurgence exists.

7 months into the crisis how have countries fared?
Many countries appear to have past their peak. The below chart helps understand about the peak attained by respective countries. The USA being the worst affected economy attained its peak on 16th July, wherein a country like India is which is also reopening its economy and businesses is moving within a range very close to the current identified peak. Singapore on the other hand has managed the situation quite well, although after the initial success, it also had its share of issues with the case hike particularly reported in labour camps. 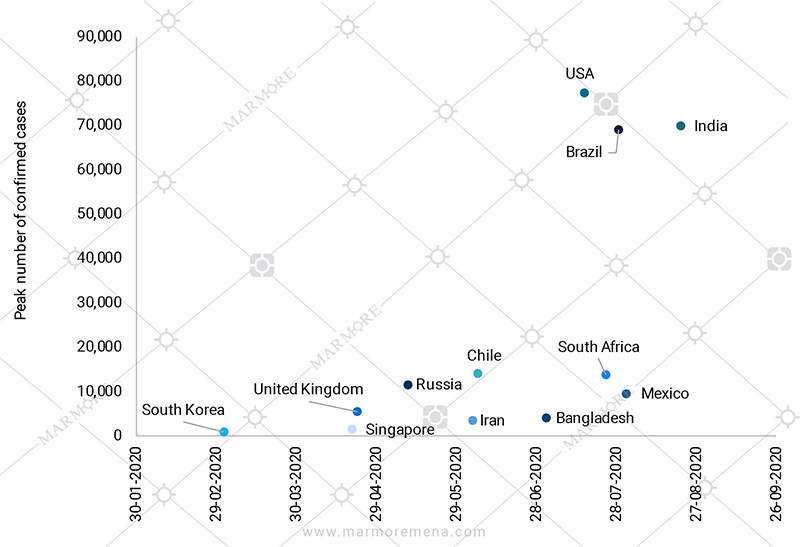 Daily confirmed cases trends:
Post attaining peak most of the countries current reported numbers are down by 50% and more, except India and Iran. Higher the drop reported better it is. In case of Singapore, Chile and South Africa the current numbers are more than 80% below the peak levels.

Recovery trends:
Most of the countries have seen a substantial improvement in the recovery rates compared to the peak period. Notable examples are Singapore which moved from 10% recovery to 96.1% recovery rate and South Korea which moved from mere 0.6% to 80.5%. Russia, South Africa, Chile have also shown good improvements. Countries which have crossed 80%+ recovery rates are better positioned to manage future spikes if any, as higher recovery rate entails less burden on the healthcare infrastructure. Better healthcare in turn is instrumental in curbing death rates, as critical patients are able to get the necessary aid on time. 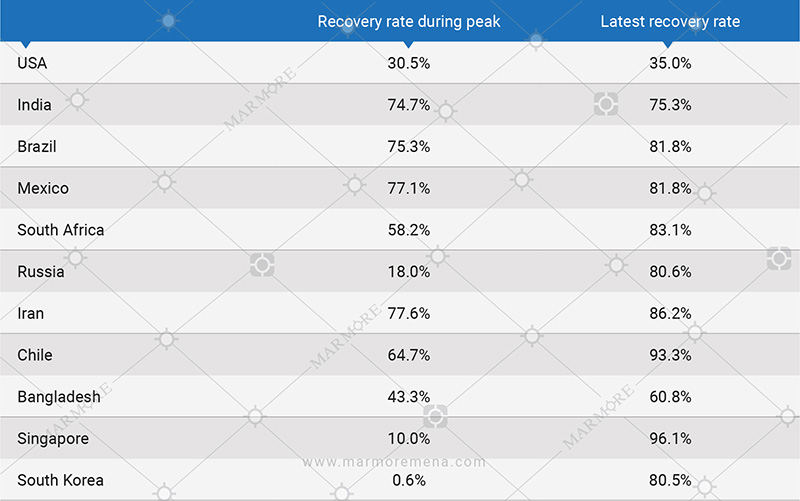 Has GCC countries reached their peaks?
GCC countries were quick to react to COVID-19 threat and had imposed very strict restrictions on mobility. Certainly this has helped the region navigate through a difficult phase and begin to re-open the economy. Depending on the measures taken at varying timelines each country has reached a peak at different time points. 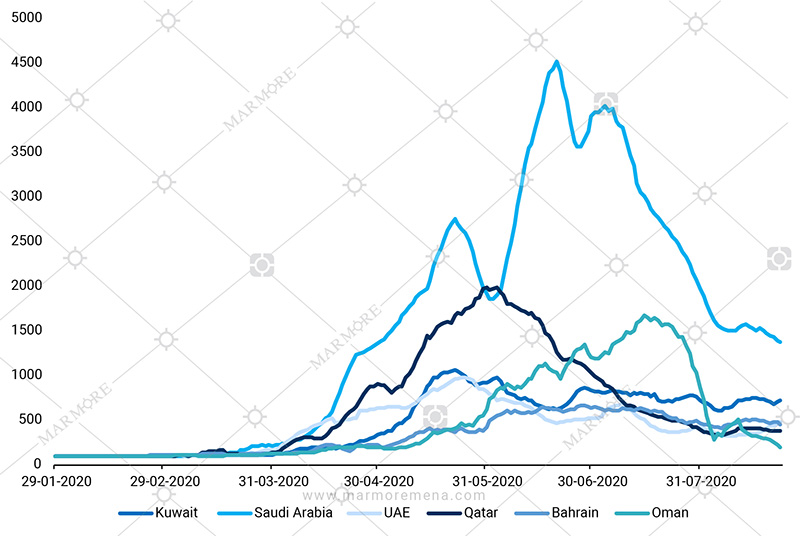 Among GCC Countries Oman and Qatar are currently reporting cases which are lower by more than the 80% mark, signalling the worst may be over. Saudi Arabia has also seen good improvement over the period. Bahrain, UAE and Kuwait are also reporting lower cases than the peak, but the drop is not as significant as in the case of other countries in the GCC region.. Kuwait in particular has been reporting flat numbers, with very mild variation.

In summary GCC Countries looks to have weathered the current storm.. However, with Dubai opening up for tourists, Kuwait entering its 4th phase of reopening and similar opening up of economies might pose a challenge to manage.

Does reaching the peak mean the worst is over?
Not necessarily, Australia, Japan and South Korea have all seen the emergence of the so called ‘second wave’. 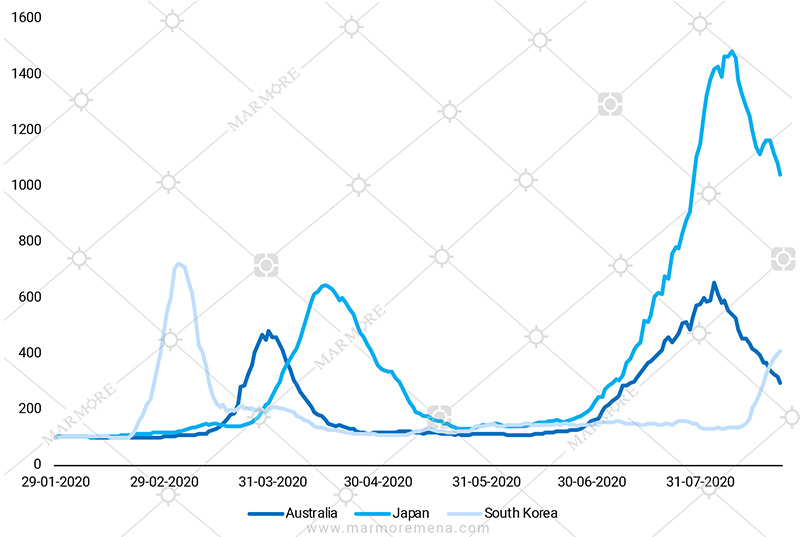 Even China has been very aggressively attempting to contain the emergence of the second wave as it resorts to extensive testing and subsequent measures in any new cluster posing a threat of re-emergence. Re-opening of economies to sustain livelihood has also brought back the risk of a second wave. Development of vaccine or herd immunity are the only two viable options to weather this challenge. There are very good progress being made on the vaccine development front but the wait is still on for a long term solution.

Flurry of Bond issuances – How are GCC countries placed?

How deep is the impact of COVID-19 on the GCC aviation industry?

Will COVID-19 increase the Cost of Capital in the GCC?

Saudi Arabia Banking Sector – The worst might not be over yet

Online Education for School Children in the GCC